They had a demonstration outside the downtown Hyatt the other day, to commemorate the anniversary of the firing of 98 housekeepers at Hyatt hotels in and around Boston.

You probably didn’t hear about this because, well, there was this alleged hurricane barreling up the coast, and everybody was too busy preparing for the end of the world to consider the fate of a bunch of hard-working women who got treated a lot worse than the weathered shingles of the quaint shops on Nantucket.

Wanda Rosario was standing on the sidewalk outside the Hyatt. She suffered more than the indignity of losing her housekeeping job of 23 years there; she unwittingly trained her replacement, a woman who is being paid a lot less to do a lot more.

The demonstration was bittersweet for Rosario. She saw a lot of old friends and former coworkers.

“Some of them looked so skinny,’’ she said.

She attributed the weight loss to stress. Or maybe some of them aren’t spending as much on food.

Rosario’s had to cut back on everything. She gave up her cellphone, which is no small thing because she’s never needed it more. After she was out of work for six months, she got a job at the Park Plaza Hotel. On the bright side, unlike the Hyatt, it’s a union shop, Local 26, and the hotel can’t just fire her on a whim. But she was number two on the seniority list at the Hyatt. She’s number 93 at the Park Plaza. It’s as if her 23 years of work history didn’t happen.

So she has to settle for irregular shifts, and she’s always on call. She’s happy to have a job, but lucky to get two shifts a week. And so she sits by the phone in her East Boston apartment, waiting, hoping for it to ring.

A few days ago, a bunch of degenerates killed a pizza deliveryman, a Dominican immigrant named Richel Nova, for a hundred bucks. Nova’s funeral will take place tomorrow in a church a few blocks from where another Dominican immigrant, Wanda Rosario, will sit by the phone, waiting for a call so she can work.

It’s funny how we look at things. Everybody looks at what was done to Richel Nova, a man’s life for a few measly bills, and agrees it was a moral obscenity. How many look at what was done to Wanda Rosario, in the name of maximizing stockholder profits, and think it’s immoral?

The bean counters didn’t kill Wanda Rosario, but they wounded her soul, they turned her life upside down. And for what? To save what for a huge corporation is the equivalent of the chump change Richel Nova was carrying in his pocket when he made his last delivery the other night in Hyde Park.

Hyatt is hardly the only company increasing stockholder profits as it cuts jobs and pay. In this, the recession that won’t end, it’s becoming the American Way. Hyatt’s stock price has jumped 50 percent since the company went public last fall. The Hyatt owners pocketed almost $1 billion with the initial public offering. Stockholders have seen their portfolios grow.

And 57-year-old Wanda Rosario, at a time when she was just starting to think about retirement, had to start over and make due with far less.

We were sitting in her apartment the other day when the phone rang and her son handed it to her. It was the Park Plaza, and she brightened because she thought it meant more work. In fact, it meant less. A scheduled shift fell through.

Wanda Rosario chuckled ruefully at the idea of celebrating Labor Day. She doesn’t even think they should call it Labor Day anymore, because American workers aren’t valued the way they used to be. We should be more honest, she says, and acknowledge whose interests dictate what happens to working families.

“They shouldn’t call it Labor Day,’’ Wanda Rosario said. “They should call it Stockholder Day.’’ 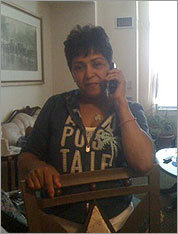 (Kevin Cullen/ Globe Staff) Wanda Rosario, one of 98 housekeepers fired last year by Hyatt, spoke on the phone with her supervisor at the Park Plaza Hotel. Her supervisor told her an already scheduled shift had been canceled.