Teaching outside the box 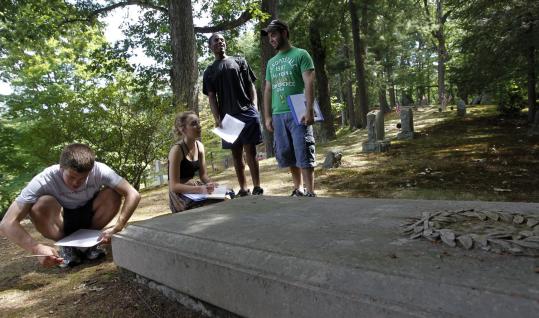 CONCORD — Tucked away in the woods along the historic road to Lexington where the first shot of the American Revolution was fired, another radical thought is gaining ground — this time in a wooden schoolhouse.

Leading a team of six educators, Michael Goodwin, a Concord Carlisle High School teacher, is pioneering what he believes may be a new model of teaching: For two weeks this month, 20 high school students — ranging from straight-A students to those who barely passed — are exploring two interdisciplinary topics, rivers and revolutions, through the lenses of literature, math, science, and history.

In a few years, Goodwin hopes to expand his tuition-free, privately funded experiment into an accredited semester-long school.

“As different as all these kids are, the one thing they have in common is they just feel they’re not fully engaged in what they’re offered in school,’’ Goodwin said.

At the Concord School of Philosophy, where Goodwin is piloting his program, the teachers break down all traditional notions of classroom learning.

Morning lessons are taught by the teachers as a group through student-driven discussions.

The students sit in a circle with the teachers, poring over photocopies of Emerson and Thoreau’s works collected in a plastic 1-inch binder balanced on their laps.

Tangents are welcome, and students often jump from discipline to discipline, forming various connections within the course material.

In the afternoons, weather permitting, the students visit local historic sites, ranging from Walden Pond to Sleepy Hollow Cemetery, where they experience firsthand what they learned about river ecology or sculptor Daniel Chester French.

“I like to be able to focus class on my own questions instead of being told what I should know,’’ said Angela Rossi, 16, a junior at Leominster High School. “No one ever entertained that for me, it was always, ‘There’s no time, we’re moving on.’ ’’

Rossi counts math and science as two of her least favorite subjects. A singer and guitar player, she said she hated the endless practice problems and — in her mind — pointless equations.

But in studying rivers and revolutions this past week, math was not only essential but also less painful, she said. Rossi said she was able to draw upon her understanding of river ecology from transcendentalism in literature to shed light on the math and science principles she normally found daunting.

“I’m not going to say this makes me excited for precalc or physics in the fall,’’ Rossi said. “But I’m not afraid now.’’

Craig Gemmell, who teaches science for Goodwin’s program, stressed the need for more interdisciplinary teaching in high schools across the state.

“Now in the age of the MCAS and standardized testing, students’ imaginations are compromised,’’ said Gemmell, director of college counseling at the Groton School. “Conventional disciplines are limited in their ability to describe the world.’’

But in low-performing school districts with limited resources, educators are pressured to focus their energies on raising math and reading test scores, and asking schools to bring an interdisciplinary approach to their curricula will be a challenge, Gemmell said.

Jon R. Star, a specialist in middle and high school education, said covering all subject areas with enough depth and breadth is often a challenge for interdisciplinary-based teaching.

“It’s very difficult to do right,’’ said Star, an assistant professor at the Harvard Graduate School of Education who is not involved with Goodwin’s project. “There’s tension between this approach and the pressure schools face to cover a certain amount of content.’’

Although Goodwin said preliminary talks with the state Department of Elementary and Secondary Education have shown promise, receiving accreditation for a semester-long school will be the next hurdle.

Goodwin, who is the son of Pulitzer Prize-winning historian Doris Kearns Goodwin and writer Richard N. Goodwin, said he plans on running another two-week program next summer and taking student testimonials to support his proposal.

“I’ve been conditioned to that,’’ Zuluaga said, adding that he recently finished taking Harvard Summer School courses. “I see traditional learning as something that gives you the core structure and foundation. What we’re doing now gives us another facet to the topics.’’

While science is his strong suit, Zuluaga, who hopes to attend MIT, said he was able to better appreciate literature through the program’s interdisciplinary approach.

“Everything has a deeper value; it makes you want to dive in,’’ he said.

June Q. Wu can be reached at jwu@globe.com.