A booming 4th in Boston

By the tens of thousands, they gazed up at the summer sky, a kaleidoscope of crackling lights. Awash in red, white, and blue, the crowd marveled at the aerial display, set to an orchestra’s swell. Children’s eyes danced as rockets burst in the air, and parents smiled as showers of light gently flickered out.

The dazzling spectacle of more than 15,000 fireworks last night capped the city’s storied July Fourth festivities, a nationally televised tradition that drew more than half a million spectators to the Charles River. Many came away awed by the array of colors, shapes, and elaborate patterns that could be seen for miles away.

“I’ve never seen anything better, and I’ve seen them all my life,’’ said Amanda Berry, a 23-year-old from Cambridge. “I like the ones that shimmer and hang. Like gold almost.’’

The most dedicated spectators arrived nearly a full day before the Boston Pops took the stage, waiting for hours in the dark, then hours more in temperatures that topped 90 degrees. It was a small price to pay, many said, to celebrate July Fourth in the birthplace of the American Revolution.

“There’s nowhere else we’d rather be,’’ said Debbie Schinker, a 40-year-old from Ohio who has come to the Esplanade the past nine years. Schinker arrived before dawn yesterday, draped in the colors of the flag, and spent the day with her husband, two daughters, and friends from past Fourths.

“We talk to friends we haven’t seen in a year,’’ she said. “They become Fourth of July family for us.’’

As always, the festivities were marked by a poignant blend of patriotism and pageantry. Waving American flags, friends and families sang along to American standards, cheered wildly for country star Toby Keith, and with appreciative signs and sustained applause thanked military personnel for their service. During the national anthem, many wiped away tears.

The ceremony also featured a tribute to the Kennedy brothers, noting the death last year of Edward Kennedy, the longtime Massachusetts senator.

The annual extravaganza drew tourists from across the country. Bill Hopp, 55, a recently retired software engineer, spent three days on a train from Seattle to attend the festivities, which he had always wanted to see in person.

For hours before the event, waiting throngs played cards for hours, plowed through stacks of magazines, read books cover to cover. Gulping drinks under umbrellas, they tried to stay cool. But mostly they waited for a searing sun to finally call it a day.

Then, they said knowingly, they would be at the center of it all, when the swirling lights against the summer sky would be their just reward.

“Boston is the Fourth of July,’’ said T.C. Jones, a 56-year-old former paratrooper and a key figure of the “red-white-and-blue crew,’’ a group of loyal celebrants known for its patriotic attire

Like many early arrivers, Jones doesn’t need his watch to know the time. When he hears the theme to “2001: A Space Odyssey,’’ it’s noon. When the Beatles waft through the air, it’s the early afternoon. Like clockwork, the cannons are fired at 1.

With temperatures in the 90s, emergency officials warned concert-goers to drink fluids and shield themselves from the sun to avoid exposure and dehydration. They treated 253 people at medical tents on site, most for minor cuts and scratches. Eleven people were taken to the hospital.

But most said it would take more than a little heat to keep them away.

John Bonaccorso, a 36-year-old from Medford, said he has celebrated the Fourth in Boston as long as he can remember, and he was in line by 4:30 a.m. yesterday, more than four hours before the gates open.

“You know everyone here is sleep-deprived,’’ he said.

But anticipation of the big event kept the adrenaline flowing. Jennifer and Mitch Stone woke up at 2 a.m. to drive up from Narragansett, R.I. with their daughters, Kayla Feero, 20, and Hayley Feero, 19. Jennifer had dragged Kayla to see Barry Manilow, so it was only right that she go the extra mile so she could see Keith.

Many people turned to practiced routines to pass the time. Shannon Bunting, 29, of Quincy, met her sister and her mother at the river around 9:30 a.m. with James, 6, and Jacob, 4, in tow. They set up for the day and had their breakfast, then offered breakfast to the ducks.

Under a tent decked out in red, white, and blue garland, Jim Watters, 62, of Billerica, played poker and had balloon sword fights with his wife and grandchildren.

For others, the wait marked the rare occasion to relax over a good chat. Harriet Sesen, 70, of Brookline, has managed to snag a prime spot up front for 34 years, dating back to when the trees were too small to block the fireworks, she said. Through the years, her group has grown to include six other families who claim premium spots.

“It’s like a reunion,’’ said Sesen, who was in line with her family at 5 a.m. “We’ve made so many friends. I’ve watched these other people’s kids grow up.’’ 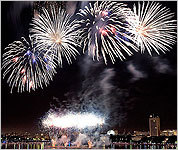