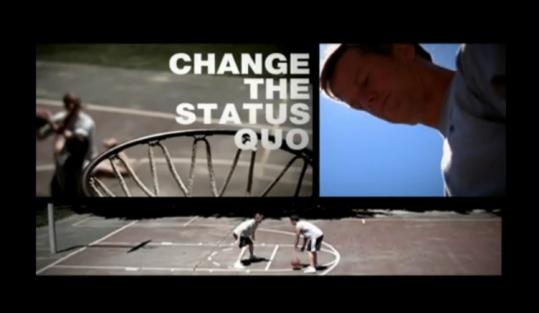 With polls showing most voters still do not know who he is, Republican gubernatorial candidate Charles D. Baker plans to launch his first television advertisement today, introducing himself as a local guy in a gray T-shirt playing pickup basketball with his son.

Baker is the first candidate in the race to launch a full television campaign, five months ahead of the November election. One outside group, the Republican Governors Association, has run blistering attacks on independent candidate Timothy P. Cahill, the state treasurer, and Cahill himself bought a 15-second spot during the Super Bowl in February.

Baker’s 30-second ad, funded by the state Republican Party, works at building his everyman credentials, with a vintage picture of Baker in a Needham High School basketball uniform and contemporary images of the candidate addressing the camera in a Swampscott High School football T-shirt, where his son attended school. The spot leaves out any mention of Baker’s Harvard background, though he played varsity basketball there. And his Republican Party affiliation also goes unmentioned, probably a deliberate omission owing to a tradition of Massachusetts voters preferring less partisan Republicans.

“I’ve spent my life here, not going anywhere else,’’ Baker says as the camera focuses on him.

Baker then mentions his tenure as a Cabinet secretary for Governor William F. Weld, when he helped overhaul welfare laws, and his subsequent career as a health care executive, when “I turned Harvard Pilgrim around.’’

“Beacon Hill is broken with too many people out of work,’’ he says. “We can change the status quo.’’

Baker aides declined to say how big the television buy is, but said the ad would run statewide and described the campaign as “pretty major.’’

Polls have shown Governor Deval Patrick, a Democrat, building a lead over Baker, even though voters appear to be giving the incumbent’s performance mixed reviews. But Baker’s biggest gap comes in name recognition. A poll conducted in late May showed that 63 percent of those surveyed had either never heard of Baker or had no opinion of him.

“This is probably more of a poll-driven decision than anything else, because his name recognition needs to be improved,’’ said David Paleologos, director of the Political Research Center at Suffolk University, which conducted the May poll with 7 News.

In a conference call with supporters yesterday, Baker acknowledged he needed greater visibility. “Because of the fact that I’m the new guy in this race . . . we need to get our message out to more people, and we need to get my name on a larger stage,’’ he said.

Paleologos said previous Republicans who won elections for governor in Massachusetts were generally better known at this point in the race. Because both Cahill and Green-Rainbow candidate Jill Stein appear to be drawing some support, Baker cannot rely on dissatisfaction with Patrick alone to define his candidacy; he has to make a specific case for his own leadership, Paleologos said.

If Baker does not define himself soon, he risks letting his opponents define him, political specialists say. Opponents have already begun challenging Baker’s record as a former Cabinet member under Weld and Governor Paul Cellucci, and as chief executive of Harvard Pilgrim Health Care. Patrick has sought to cap health insurance rates and has accused Baker of not doing enough to rein in costs, while Baker has accused Patrick of waiting until election season to score political points without truly addressing the problem.

“The Patrick campaign would like to define Baker as an HMO executive, one of the people who is denying your treatment,’’ said John C. Berg, chairman of the government department at Suffolk.

Though the state party is funding this ad, Baker at this point has the luxury of spending more money on television than his opponents, because he has been raising it at a faster clip. Cahill has about $3 million, but his fund-raising has slowed since he left the Democratic Party last year. Cahill, having lost ground in the polls, has also been forced to consider putting up television ads sooner than he initially planned.

The Republican Governors Association stopped airing ads about Cahill over Memorial Day, leaving an opening on the airwaves. A spokesman for the group, Tim Murtaugh, would not disclose the group’s future advertising strategy.

Cahill spokeswoman Amy Birmingham acknowledged the campaign is discussing its advertising strategy, but said no timeline has been finalized.

The Patrick campaign, meanwhile, cited a recent Baker fund-raising letter in which the candidate told supporters that the election would be won with advertising spots.

“The governor continues to believe in building a grass-roots organization, person by person,’’ Patrick spokesman Alex Goldstein said in a statement.