US may deport Harvard student

He was detained at airport; crossed border at age 4 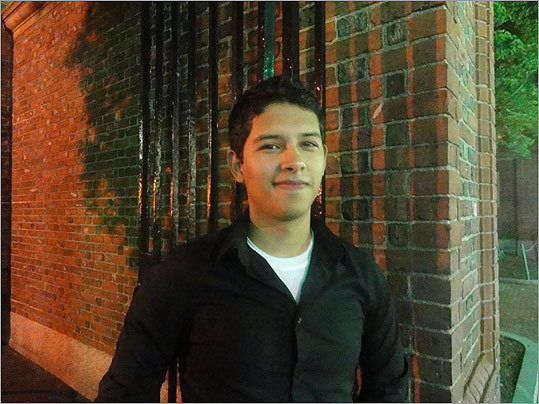 A 19-year-old Harvard biology student, who has been in the United States unlawfully since he was 4 years old, was detained at a Texas airport this week and is fighting deportation to his native Mexico.

Eric Balderas, a sophomore on a full scholarship to Harvard, was detained Monday while preparing to board a flight back to Boston to spend the summer conducting research at the university. He had been visiting his mother in San Antonio, where he grew up and was valedictorian of his high school class.

Balderas said he had lost his Mexican passport and tried to board the flight using a consular card from the Mexican government and his Harvard identification. Instead, he said, airport security called immigration officials, who handcuffed and fingerprinted him and detained him for five hours before letting him go. He boarded a flight back to Boston the next day, pending a July 6 court date with an immigration judge, probably in Boston.

Yesterday, Balderas was shaken and fearful of being forced to return to a country he barely remembers. He hopes to finish school and become a cancer researcher.

“I’m very worried, to be honest,’’ he said in an interview. “I’m willing to fight this, of course. I’m just hanging in there.’’

Immigration and Customs Enforcement spokesman Brian P. Hale would not comment on Balderas’s case because of privacy laws, but he said ICE evaluates each case on an individual basis.

Balderas was arrested a year after Drew Gilpin Faust, Harvard president, urged Congress to support the Dream Act, federal legislation that would allow immigrant youths to apply for legal residency, under certain conditions. Faust recently met with US Senator Scott Brown, in part to urge him to support the measure.

Yesterday, a Harvard spokeswoman praised Balderas and said he is an example of why Congress should pass the act.

“Eric Balderas has already demonstrated the discipline and work ethic required for rigorous university work and has, like so many of our undergraduates, expressed an interest in making a difference in the world,’’ said Harvard spokeswoman Christine Heenan. “These dedicated young people are vital to our nation’s future, and President Faust’s support of the Dream Act reflects Harvard’s commitment to access and opportunity for students like Eric.’’

The Dream Act would create a path to legal residency for youths who arrived before they turned 16 and have lived here for five years. They would have to complete two years of college or the military, among other requirements to qualify.

Opponents say it would reward students and their families who broke the law by entering the country illegally, but supporters point out that children had no say in their parents’ decision to bring them to the United States. The presidents of Harvard, Brown, Tufts, and other universities have backed the legislation, which has been stalled since 2001.

Yesterday, Balderas’s stunned friends and classmates rallied to his defense, joining a Facebook page and urging immigration officials to let him stay. They said he has tried to be a good citizen and stellar student.

Friends pointed out that Balderas barely remembers Mexico and considers English to be his first language.

“He’s like an American, but without documents,’’ said Mario Rodas, a member of the Student Immigrant Movement, which has been pushing for legal residency for immigrant youth. “These are the kind of people we need in this country, doing research for cancer.’’

Balderas said he is the son of a single mother who left an abusive husband and worked 12-hour days packing biscuits while raising him and his younger brother and sister in San Antonio. At home, he would baby sit his siblings while juggling homework.

“I honestly never thought I’d make it into college because of my status, but I just really enjoyed school too much and I gave it a shot,’’ he said. “I did strive for this.’’

Now he is at one of the world’s best universities, majoring in molecular and cellular biology.

But on Monday, as he sat handcuffed, he said he contemplated suicide at the thought of being sent back to Mexico. He does not remember his hometown of Ciudad Acuña, in the northern state of Coahuila. His family is in Texas.

“They just kept [asking] me if I had any other documents, that they were just trying to help me so that I can get on the plane,’’ he said, recalling his conversation with immigration officials. “But at that point I realized there was nothing that I could do, that anybody could do.’’