Slain teen recalled as one who saved another’s life 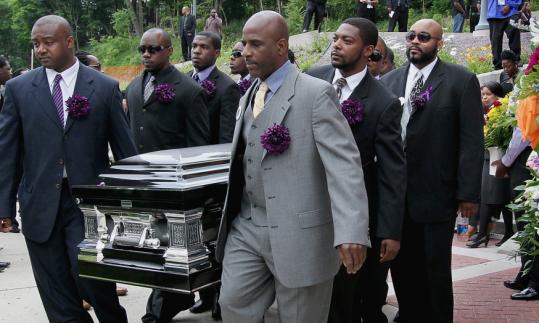 Outside the Morning Star Baptist Church yesterday morning, Lenita Ford approached several clergy members as they prepared for the funeral of Ivol Brown, a Mattapan teenager stabbed to death last week. She told them her story, of the night she said he saved her life.

Moved, they invited her to speak during the funeral, and Ford told the gathering of about 800 mourners what happened on that autumn night.

It was last Nov. 1, and Brown was the DJ at a Halloween house party on Glenway Street in Mattapan. As revelers were leaving, shots were fired, and a bullet pierced the chest of the 21-year-old Ford. Brown rushed out of the house and went to her.

“I thought that was the last day that I was ever going to see life, but it so happened he runs outside and saved my life,’’ she said, speaking slowly. “Out there, laying there, screaming, telling God, ‘I don’t want to die,’ he put his shirt over me, telling me to just relax, calm down, you’re not going to die. I wake up the next day, I see him and my best friend.’’

Ford, critically injured, spent about two weeks recovering at a hospital, with Brown visiting her or calling her each day.

After Ford retold her story and moved back toward her pew, Brown’s mother, Merveline Chambers, stood, walked to her, and gave her a long hug.

Brown was stabbed to death on May 31, near 35 Harmon St. in Mattapan; a 19-year-old man was also stabbed but survived. Boston Police spokeswoman Elaine Driscoll declined to give a motive, but said the attack was not random and that neither Brown nor the other victim were known to police. No arrests have been made in the case.

Brown was remembered yesterday as a born leader, who, despite working three jobs, tried to improve his community. His friends and family vowed to keep his work alive.

Hector Pizarro, his supervisor at Family Services of Greater Boston, told those gathered that Brown was an active leader in creating a movement for more summer jobs for youths.

“ ‘Be the change you wish to seek’; he was always touched by that quote,’’ Pizarro said. “Every time we had an issue, he would say: ‘You know what, I’m going to walk to the mayor’s office. . . . Show me how to create a budget. Show me how to approach the mayor in the right way, so he’ll listen to me.’ ’’

In addition to working at that nonprofit aimed at improving the lives of families, Brown worked at the City School and Mattapan’s Finest Barber Shop.

Hayden Frederick-Clarke, a teacher at Charlestown High School, said, “When I first met Ivol, I thought he was a bit annoying, a bit odd, and way too argumentative.’’

But, he said, “after many battles with Ivol and countless conversations, I began to realize he was a budding genius. There were even strong lessons in his nuisance behavior.’’

About halfway through the service, Brown’s sister, Ayesha Brown, and three other girls took the stage, dressed in flowing white dresses. They performed an interpretive dance to a spiritual song, just several feet from where Brown’s pewter-colored casket rested.

Bishop Omar George, who delivered the eulogy, encouraged the young men among the mourners to do their part to help stop the violence.

“You do not have a second chance,’’ he said. “When you kill someone, they are dead. Death is sobering.’’