‘Yours is a peaceful faith’ 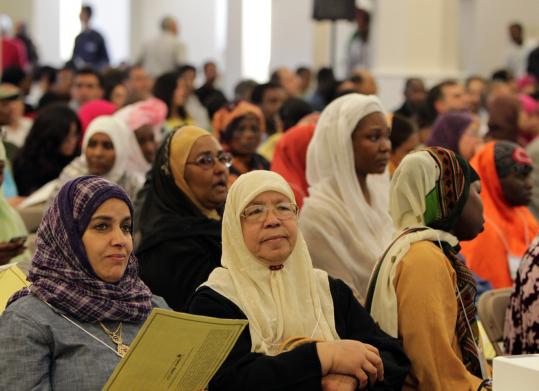 More than 1,100 Muslim-Americans from across the state attended a forum yesterday at the Islamic Society of Boston Cultural Center on ways to cope with discrimination. Governor Deval Patrick promised his support. (Matthew J. Lee/ Globe Staff)
By Jonathan Saltzman and Travis Andersen Globe Staff / May 23, 2010

Governor Deval Patrick told more than 1,100 Muslims at a Roxbury mosque yesterday that he knew many have encountered discrimination and racial profiling since Sept. 11 and that he would do everything in his power to combat those problems.

Speaking at what Muslim activists described as the first such forum with a Massachusetts governor, the 53-year-old Democrat pledged to take seven steps to help Muslims in the state.

The measures ranged from urging businesses and governments to allow Muslims to take time off to attend Friday afternoon prayers to publicly denouncing discrimination and racial profiling against believers of Islam.

Although he responded “yes’’ when asked pointedly whether he was committed to each measure requested, Patrick sometimes broadened his pledges to recognize that other religious and ethnic groups deserved the same protections and accommodations.

“Yours is a peaceful faith, and I know that, and I know you are worried [about whether] others know that,’’ Patrick said after several Muslims joined him on the platform at the Islamic Society of Boston Cultural Center to recount stories of epithets hurled at them on Boston streets and FBI agents visiting their houses.

“I know that people have been afraid and angry, and sometimes that fear and anger is randomly directed at you,’’ he said.

The audience, which comprised Muslims from across the state, including many women who wore hijab head coverings and men who wore kufi caps, frequently interrupted Patrick with cheers and chants of “Allahu Akbar!’’ which means “God is great!’’

Patrick, who noted that he has lived in Sudan and northern Nigeria and spent considerable time with Muslims, greeted the gathering upon his arrival with “Assalamu alaikum,’’ meaning “peace be upon you.’’ He drew loud cheers when he spoke a bit of Arabic.

The governor, who could not personally attend the official opening of the $15.6 million Roxbury mosque last year and was fulfilling a promise to visit, has appointed a liaison to the Muslim community. Patrick introduced the liaison, Ron Bell, one of his advisers for community affairs.

Patrick also promised to try to visit two more Muslim institutions by the end of the year, encourage public schools to be more sensitive to the needs of Muslim students, foster sensitivity training for law enforcement officials, and regulate banks that ignore the state’s usury cap law.

Attorney General Martha Coakley sent a representative who promised to use a $50,000 grant to increase sensitivity training for law enforcement officials.

Organizers of the forum said it was designed to get Muslims more involved in politics, repudiate extremism, and educate other Massachusetts residents, too many of whom hold negative stereotypes about Muslims.

“In general, we’re only recognized as terrorists,’’ said Dr. Syed Asif Razvi, a surgeon who is president of the Islamic Council of New England, in an interview before the event began.

He said recent news stories about the arrests of three New England men on immigration charges as part of the investigation of an attempted car bombing in Times Square has made many law-abiding Muslims feel “here we go again.’’

“We work very hard to build bridges, and it kind of wipes out all we’ve done for a period of time,’’ he said.

While some Muslims at the event said they have been harassed since 9/11, others said the problems they face are subtler, such as hiring discrimination.

“When [employers see] Muslim names, we don’t think we’re getting an equal chance to compete for jobs,’’ said Sameer Abu-Alsaoud of Cambridge. Abu- Alsaoud, 49, said he has been jobless for at least a year, even though he holds a master’s degree in management from Cambridge College.

Bilal Kaleem, executive director of the Muslim American Society of Boston and one of the organizers of the gathering, said beforehand that Patrick generally has been viewed as sensitive to the concerns of Muslims in Massachusetts.

Kaleem attributed that in part to the governor’s experience as an assistant attorney general for civil rights in the Clinton administration. “He comes from a civil rights background, so he understands the issues at a deeper level,’’ Kaleem said.

Patrick met with organizers of the event several weeks ago at the mosque and appeared to be well-prepared for the commitments sought by the community.

The 1,100 Muslims at the event represented at least 25 Muslim institutions across the state, including 15 mosques. Many also came from a wide range of backgrounds, including Somali, Moroccan, Sudanese, African-American, Indian, Pakistani, Syrian, Palestinian, and West African.

The event came at the end of a three-month campaign during which activists held more than 15 community meetings that solicited the opinions of at least 500 Muslims.

The activists found that the community’s biggest concerns included the treatment of Muslims by law enforcement officials and a lack of awareness of Muslim customs and culture in public schools.

There are conflicting numbers about the size of the state’s Muslim population, but various national religious-interest groups put the figure at about 70,000.