Panel to investigate cause of pipe break

Could pave way for damage suit 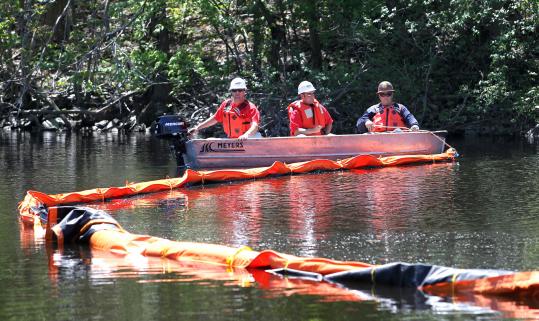 Crews worked to restore the banks of the Charles River yesterday near the site of the MWRA pipe clamp failure in Weston.
(Pat Greenhouse/Globe Staff)
By Michael Levenson and Jonathan Saltzman Globe Staff / May 6, 2010

The Massachusetts Water Resources Authority said yesterday it will establish an independent commission to determine what caused a connection to fail in a major water pipeline on Saturday, a move that could lay the groundwork for lawsuits against the companies involved.

MWRA officials, who will hold a special board meeting today to discuss the pipe break, said they want the companies responsible for the clamp failure to pay for the repairs and for any losses incurred during the more than two days the region was under orders to boil water used for drinking and cooking.

“We would like to find the accountable party, and then have them pay for the cost of the repairs and some of the inconveniences,’’ said Ian A. Bowles, the state secretary of energy and environmental affairs, who chairs the MWRA board. “But that’s in some ways ahead of the game. We need to get the basic answers first, of how did this happen and whose responsibility was it.’’

Bowles said Governor Deval Patrick has also asked the MWRA to investigate whether the pipe break revealed other potential vulnerabilities in the region’s water supply system, and to examine if the construction of a series of backup pipes — which is now four years from completion — can be accelerated.

State officials are hoping to avoid passing the cost of the repairs on to customers served by the MWRA. Patrick said yesterday he would not support a surcharge on ratepayers to pay for the fix. Water authority officials are expected to brief the board today on the cost of the failure, as well as what they have learned about the problem so far.

Jan R. Schlichtmann, a prominent plaintiffs’ lawyer from Bev erly, said it appeared that state officials are preparing a lawsuit to recover the still-unspecified costs of the water disruption. The 1-ton clamp that broke on the pipe was only seven years old, and Schlichtmann said state officials will undoubtedly try to determine if it was negligently designed, manufactured, or installed.

“We’ve got to see what the facts are, of course, but [negligence] has got to be high on the index of suspicion,’’ said Schlichtmann, whose nine-year legal battle against companies accused of leaking toxic contaminants into Woburn’s drinking wells was chronicled in the book and movie “A Civil Action.’’

Legal specialists were divided on whether businesses or residents in the 30 communities affected by the interruption in water service might sue for damages.

Jeffrey A. Denner, a Boston lawyer who represented relatives of Milena Del Valle in a civil lawsuit after the Jamaica Plain woman was killed in a 2006 ceiling collapse in a Big Dig tunnel, said he doubted that businesses or residents will file suit. The cost for a coffee shop to hire an expert to testify about business lost would far outweigh the modest damages, he said.

“An inconvenience is not a disaster,’’ Denner said.

But Schlichtmann said that if numerous businesses lost modest amounts of money, they could file a class-action lawsuit.

“It certainly would not be frivolous by any stretch,’’ he said. “You’ve got such a huge group of people who suffered a substantial disruption. That’s why we have these class-action vehicles.’’

But Jon B. Hurst, president of the Retailers Association of Massachusetts, said none of his 3,100 members, which include some restaurant franchises, have inquired about recovering money from a disruption in business.

And Peter Christie, president and chief executive of the Massachusetts Restaurant Association, said that while business at some restaurants in the area dropped as much as 25 percent during the water crisis, he doubted any will take legal action.

Christie said state officials and the office of Mayor Thomas M. Menino of Boston responded quickly enough that restaurants were able to take steps to minimize their losses. Menino’s office sent the association an e-mail Saturday evening, informing restaurants not to serve ice and to boil water or use bottled water. Christie, in turn, forwarded the e-mail to about 1,000 restaurants in the affected communities.

“I think they could have been hurt a lot worse,’’ Christie said.

House Speaker Robert A. DeLeo, meanwhile, reiterated yesterday that he plans to hold hearings into the cause and costs of the pipe break, which affected some 2 million people until the order the boil water was lifted Tuesday.

“This was a major portion of the Commonwealth of Massachusetts whose water supply was cut off, and I just want to hear how, and why, and how do we avoid this in the future,’’ DeLeo said.

In an effort to pinpoint the cause of the failure, workers continued to search the Charles River in Weston yesterday for the metal clamp that broke loose from the pipe. State Police divers conducted their own search for the clamp on Tuesday but failed to find it. Today the MWRA plans to dredge the river to continue searching, officials said.

Yesterday, crews used massive earth-moving machines to begin rebuilding a hillside that was badly eroded when the clamp broke and released millions of gallons of water. They extended a 700-foot orange boom into the river to keep silt from spreading downstream.

As officials focused on the recent crisis, an obscure commission established last year by the Legislature to develop long-range plans to finance the state’s aging water infrastructure held its first meeting yesterday, under the sudden glare of the recent break.

Commission members said they hope to develop new ways to pay for the maintenance of the state’s 20,000 miles of sewage lines and 21,000 miles of water pipes, most of which were installed more than 50 years ago. Members acknowledged it will not be easy to persuade the public to spend more money for pipes and sewage lines.

But Representative Carolyn Dykema, a Holliston Democrat, quoted Ben Franklin: “Only when the well runs dry do we learn the wealth of water.’’ The state’s water system is vulnerable, she said.

“Having a plan to protect our water infrastructure is critical.’’