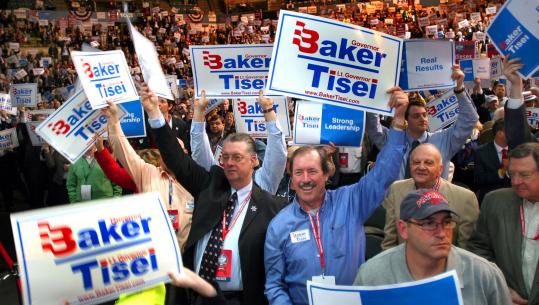 WORCESTER — As Republican rock-star-of-the-season Scott Brown took the stage, Stacey Yasutovich, a 20-year-old student and church youth director, rose to her feet amid a crowd of middle-aged delegates, and let loose a hoot of approval: “Woo-hoo!’’

Yasutovich was one of hundreds of first-time delegates to yesterday’s Massachusetts Republican convention, fervently entering the fray at a moment when the GOP’s fortunes in Massachusetts seem more promising than they have in her lifetime.

“Oh my gosh, I’m so pumped,’’ the Franklin woman said. As a conservative Christian and a Republican voter, she added, she always felt like a minority in Massachusetts. “The minority is finally going up and fighting and going through the barriers. I’m just like, out of my mind!’’

Not all of the party faithful were quite so demonstrative at the DCU Center in Worcester yesterday. State Representative Karyn Polito, the uncontested nominee for state treasurer, had to fairly beg the crowd to make some noise and stomp on the bleachers during her nomination speech. (“Come on, I want to feel the energy, guys!’’ she pleaded.) Only gubernatorial nominee Charles D. Baker and his “Shipping Up to Boston’’ theme song by the Dropkick Murphys got the crowd shouting. As he served up question after question — “Are you ready to stand up and make government work for you?’’ — the delegates responded with a thundering “Yes!’’

Three months after Brown’s improbable victory in the Jan. 19 special election to US Senate, a new sense of hope and momentum was palpable among the 3,100 delegates, which seemed to include more young faces and fewer crazy hats than in years past. Unlike four years ago, when the party’s ranks were dwindling and there was only one contest for a statewide party nomination, delegates yesterday even got to choose between Republican candidates for auditor and governor. Party leaders estimate that 175 Republicans are now trying to wage campaigns for state and federal office.

“What a year!’’ State Representative Lew Evangelidis, a candidate for sheriff in Worcester County, said to the crowd. “It’s already been great. It’s only going to get better. There is change in the air — not only in Worcester County but across the country.’’

If that call for change sounded familiar — evoking the last Democratic campaigns for governor and president — then so be it. Republican speakers yesterday were happy to capitalize on disenchantment with the change promised four years ago by Governor Deval Patrick and two years ago by President Obama.

Some conservative delegates said their fear about the agendas of the Democratic administrations in Boston and Washington, D.C., motivated them to get involved in politics for the first time. Elaine Appel, 45, a stay-at-home mother of three sons in Hamilton, said she is dismayed by “the immediate drive to increase the scope, breadth, and depth of the federal government.’’

“And the debt really frightens me,’’ she added. “I feel it weakens us so irreparably that I felt I had to jump in.’’

So last December, she joined her local Republican town committee. And yesterday, she participated in her first convention, expressing measured hope for the November elections. “I think we’ll pick up seats but it’s all about how many and which ones,’’ she said. “We’re not going to make the wild changes I’d like to see, but incrementally chip away at it. Our state government is so incredibly lopsided. I think that bothers people.’’

Many Republicans seemed to have little memory of the party’s ownership of the Massachusetts governor’s office for 16 years. Or the heady sense of expectation that Mitt Romney — a Republican star in his own right after his leadership of the Salt Lake Winter Olympics — brought to the 2002 convention when he returned to Massachusetts to run for governor. Adrienne Okon, 33, a Falmouth resident and lifelong Republican who was serving as a delegate for the first time, said the Brown election was a turning point for her. “I’ve lived in Massachusetts my whole life,’’ she said. “This is the first time that somebody actually represents me.’’

What delegates remembered most vividly were the down-and-out years between then and now. In 2006, the Republicans lost the governor’s office to Democratic Governor Deval Patrick and their slim ranks in the Legislature were further diminished. They had no hope of claiming a Congressional seat; now they have numerous candidates waging serious challenges.

“There’s a feeling that the tide has really turned in Massachusetts,’’ said Jennifer White, 30, a delegate from Sandwich. “Where Republicans hadn’t been taken seriously in the past, now they are.’’

While the drama on the convention floor centered on the two contested races, the delegates’ thoughts were already turning toward November.

Some believe they are heading into an election season of near-endless possibility after years of Democratic dominance of the Legislature.

“It’s very, like, hopeful here,’’ said Anthony Fulgoni who sat on the bleachers with two others who were, like him, 19-year-old first-time delegates from Billerica. Thomas Mullen had shoulder-length wavy hair; Gregory Mollison wore a modified Mohawk. “You actually have a chance to win the position now,’’ Fulgoni added.

Peter Dulchinos served as a delegate from Chelmsford along with his two grown sons.

“I think people are more animated than I’ve ever seen them before,’’ he said

Still, the longtime Republican — who has been to numerous conventions in his day — was not counting any chickens just yet. It’s a long way to November, he noted.

“I don’t like to get too excited in this state,’’ Dulchinos said. “But I think this is the year. If we don’t do it this year, wow. We may never do it.’’

Scenes from the state GOP convention