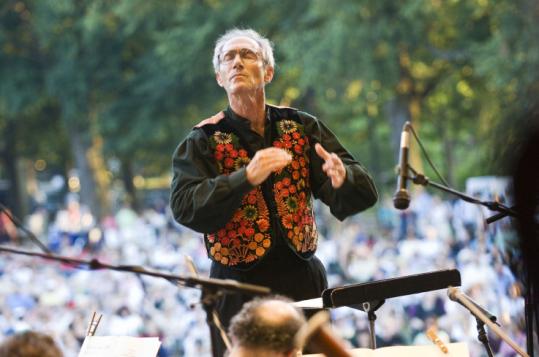 Boston music conductor Charles Ansbacher, who has worked with orchestras in many developing countries, had been especially looking forward to another visit to Kyrgyzstan this month to lead a young orchestra there in a concert of pieces by Beethoven and Haydn.

He was collecting supplies for the orchestra members — spare strings, mutes, electronic tuners, and conductor’s batons — when news broke of the deadly political violence that engulfed the Central Asian country over the past week. Ansbacher said yesterday that he had no choice but to postpone his trip and has no idea when he will be able to return.

“It’s very disappointing,’’ he said of the unrest. “This will set things back for a while.’’

Ansbacher, a Cambridge resident who founded the Boston Landmarks Orchestra in 2000, said in a phone interview that he has traveled to Kyrgyzstan several times over the past decade, at first helping to establish an orchestra supported by the US Embassy there, and later helping the musicians launch the Philharmonic Chamber Orchestra.

The orchestra performs in the main Philharmonia concert hall in the capital, Bishkek, next door to the Presidential Palace, which was trashed and looted in the street fighting that killed scores of people, drove President Kurmanbek Bakiyev from the capital, and left the country’s fate unsettled.

“So these are all streets and boulevards where I have spent hours getting to and from rehearsals. It’s sad to think of those areas as being a shooting gallery,’’ Ansbacher said.

He recalled the hopeful times in Kyrgyzstan after the 2005 Tulip Revolution that pushed the president at the time from office and brought new elections, culminating in Bakiyev’s victory.

But unlike other popular uprisings against authoritarian regimes in post-Soviet Union countries including Georgia and Ukraine, the Kyrgyzstan revolt did not produce a united, democratic alternative. People increasingly complained about corruption and autocratic rule, leading to the current turmoil.

“At the time of the revolution, there were people in Bishkek who told me the people in the new government are no different from those in charge before, [with] the same self-serving interests,’’ he said. “So it’s not been easy for them to safely put their trust in their political leaders.’’

Ansbacher first traveled to Kyrgyzstan to help launch the Ala-Too Symphony Orchestra, named for the mountain range around the capital that Ansbacher said reminded him of Colorado, where he spent two decades early in his career building up the Colorado Springs Symphony Orchestra. “It has mountains, and very clear beautiful air. It’s really quite spectacular scenery,’’ Ansbacher said.

When the US Embassy in Bishkek shifted funding to other areas, the orchestra players launched the Philharmonic Chamber Orchestra in 2007, directed by violinist and concert master Nur Omurbaev. And they made Ansbacher principal guest conductor.

Ansbacher said in a letter to Omurbaev and the orchestra on Friday: “I was so looking forward to seeing you all and returning to the podium to make music with you, my friends, in Bishkek. I am so disturbed as I read of the violence and uncertainty that the city and the country is suffering from. I wish I could help in some way, and at some time.’’

Ansbacher spent four years living in Austria in the 1990s where his wife, Swanee Hunt, served as US ambassador. He traveled to many countries then in political transition from former Soviet republics to independence, and also spent time in the troubled Balkans, arranging cross-cultural exchanges and performing as guest conductor.

The family moved to Boston in 1997, where Hunt became a lecturer at Harvard University’s Kennedy School of Government and expanded her philanthropic work through the nonprofit Hunt Alternatives.

In 2000, Ansbacher founded the Boston Landmarks Orchestra, which performs exclusively free concerts in architectural gems around the city.