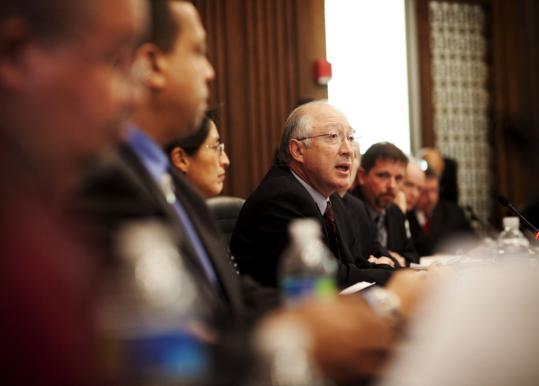 WASHINGTON - After a series of meetings yesterday about the controversial Cape Wind energy project, US Interior Secretary Ken Salazar pledged that the nine-year permitting saga of the Nantucket Sound wind farm would be over by the end of April.

“Having [Cape Wind] continuing to face a future of uncertainty is bad for everyone involved,’’ Salazar said after meeting with Native Americans, historic preservation officials, the developers, and others associated with the project. “The lesson here is that the process needs to be streamlined going forward.’’

Salazar called the meetings to resolve what has become the last major regulatory hurdle for the nation’s first proposed off-shore wind farm: Native Americans’ assertion that the project will interfere with their age-old spiritual rituals and ancestral grounds, and the resulting determination by the National Park Service that Nantucket Sound is eligible for listing on the National Register of Historic Places.

Although most of the participants said they want to find a compromise, reaction after the meeting indicated that would be an enormous challenge. The Alliance to Protect Nantucket Sound, the project’s main opposition group, and the Aquinnah Wampanoag tribe said emphatically in a late afternoon news conference that they wanted Cape Wind and Salazar to move the project off Tuckernuck Island, near Nantucket. Yet the Aquinnah Wampanoag tribal historic preservation officer, Bettina Washington, said some of the same Native American concerns about ancestral grounds could crop up at that site.

“An in-depth study would have to be done,’’ Washington said.

Meanwhile, Cape Wind developers said they had no intention of moving the 130-turbine project to a site with deeper waters, higher waves, and the need to run longer transmission lines - all of which would dramatically increase the cost. Plus, they added, the clock on the project would have to start all over again.

“If somebody else wants to develop offshore wind at that other site, we wish them well; they have a long road ahead of them,’’ said a Cape Wind spokesman, Mark Rodgers.

Mashpee Wampanoag, a second tribe involved in the dispute, struck a more conciliatory tone, inviting Salazar to visit them, with Tribal Chairman Cedric Cromwell saying, “Today’s meeting was the first step in what we hope will be a thorough and comprehensive consultation.’’

During the next few weeks, Interior Department officials will reach out to the main parties that would have to reach a compromise, according to a spokeswoman. Legally, those discussions do not have to include the Wampanoag; instead, the Massachusetts Historical Commission is representing preservation interests. Salazar said he will allow public comment on the issue until Feb. 12, in hopes of getting a compromise by March 1.

But if one is not reached, he has the legal authority to “terminate’’ the consultation process. If he does, the Advisory Council on Historic Preservation, a federal agency that has been involved in the issue, will probably hold a public hearing before submitting comments to him within 45 days. Salazar then can make a final decision, in April.

Salazar also said he would be reviewing the National Park Service’s unusual determination that the 560-square mile Nantucket Sound is eligible to be listed on the Historic Register.

“It is something we are going to look at,’’ Salazar said.

It is unlikely Nantucket Sound will be formally listed on the register, because top state officials that oppose the listing, including Governor Deval Patrick, would probably be able to block it. Yet the mere determination of eligibility triggers the need for consultations with the tribes, and state officials fear any activity in the sound that requires a federal permit, such as fishing or ferry service, would have to enter a lengthy deliberation process as a result.