Taking the ‘little’ out of Little League

In West Roxbury, a winning tradition is threatened by feuding adults 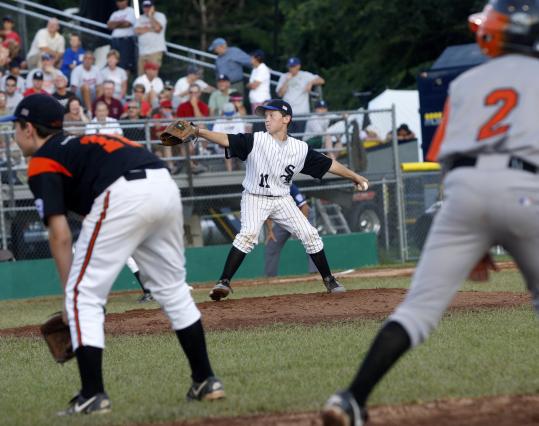 Massachusetts Parkway National Team went up against Shelton, Conn., in the 2008 Eastern Regional Little League Tournament in Bristol, Conn. The Parkway Little League is awash in controversy, with disputes that have dragged on for months.
(Barry Chin/Globe Staff File)
By Peter Schworm Globe Staff / January 9, 2010

Board members are squabbling over league rules, and jockeying for control. Managers are allegedly stockpiling talent in the minor leagues. Lawyers are involved.

No, this isn’t another labor dispute in Major League Baseball. This contentious state of affairs comes courtesy of Little League - ages 9 to 12.

The Parkway Little League - one of the state’s oldest leagues, known in Boston as an intensely competitive winning machine - is awash in controversy, beset by bitter disputes over how the 14-team league is run and who should run it. The infighting has dragged on for months, delayed league elections and the annual player draft, and resulted in the league’s charter being suspended amid allegations that it has run afoul of a host of Little League rules.

The strife, many say, is fallout from the often hypercompetitive culture of youth sports, the latest example of intensely involved parents turning a beloved childhood game into a bureaucratic brawl.

“You know how adults can be in these situations. They’re worse than the kids,’’ said Steve Barr, media relations director for Little League International in Williams port, Pa. “In this case, things kind of snowballed and got out of control. It was adults bickering more than anything else.’’

At the heart of the brouhaha was a feuding 31-member board that controls virtually everything the league does, from ordering uniforms to setting schedules - and, most controversially recently, enforcing a system that allowed major league managers to hold some players on minor league teams.

The practice effectively created a farm system, with managers of major league teams getting a certain number of “protected’’ players on a minor league team who can be called up when needed.

It was simply the way things were done, some felt. “It was just a format we used to put kids on a team,’’ said Dave Greenwood, a 33-year-old who coached the league’s state championship team in 2008, advancing to the regional competition in Bristol, Conn.

But it had begun to irritate a growing number of parents, who felt the system penalized some players by holding them out of league-wide tryouts and preventing them from advancing to other major league teams. Others felt certain coaches had managed to gain advantages by monopolizing talented players.

A revolt began. And soon a growing slate of other complaints had put the board in the crosshairs. Some parents, including several on the board, alleged that a number of long-serving members had hijacked the board and blocked efforts to change the system.

“Just because we as a league had been doing it wrong for years that didn’t make it OK,’’ said Joe Castellano, a 42-year-old board member whose 12-year-old son plays in Parkway. “Once they’re protected, they don’t have the opportunity to try out for the majors. They were stuck in the farm system so to speak.’’

The dispute escalated. Squalls erupted at heated board meetings. Lawyers were brought in, at a cost of several thousand dollars, to scour the league’s constitution.

“There were two months of back and forth,’’ said Patrick Holden, assistant regional director of Little League’s Eastern Region in Bristol. “They were debating clauses in their own constitution.’’

Some disgruntled parents, in the midst of the squabble, had contacted Little League Baseball, which was dismayed to learn of the league’s farm system.

“They treated it like it was Major League Baseball,’’ Holden said. “Psychologically, what are you telling these kids? That’s definitely not within our guidelines.’’

Trying to quell the disputes and set Parkway straight on its procedures, Little League sent a representative to league meetings. It didn’t help.

“She kind of took over,’’ said Joe Petitpas, who was league president at the time, before resigning last month amid the controversy. “We definitely butted heads. She wasn’t going to give an inch and neither was I.’’

A stern letter from Little League Baseball warned the league to conform to a list of rules - anything from those restricting the number of pitches that young players can throw in a game to others prohibiting jewelry on the field. But it had a fundamental admonishment: Restore “basic and general communication.’’

The controversy continued. But on Monday, the league made a move that Little League officials said would go a long way toward winning its charter back. In an attempt to minimize dissent on the board, it simply slashed it nearly in half, to 17, ridding it in the process of some of the staunchest defenders of the old system.

With thoughts of baseball far away during the off-season, some parents have only followed the dust-up from a distance, but say the whole affair is a shame.

“It’s unfortunate that these things happen,’’ said Dan Murphy, whose son plays in the league. “You don’t want to upset children’s enjoyment of the game. I just hope they iron it out.’’

Greenwood said it was unfortunate that some board members let the disputes get personal and take on a life of their own.

“It became a power struggle between a group of adults, and it never should have gotten that far,’’ he said. “I’m looking forward to moving forward. Let’s get rid of the lawyers and play baseball.’’