No fans of injustice

Twins, 10, reach out to players from segregation-era leagues 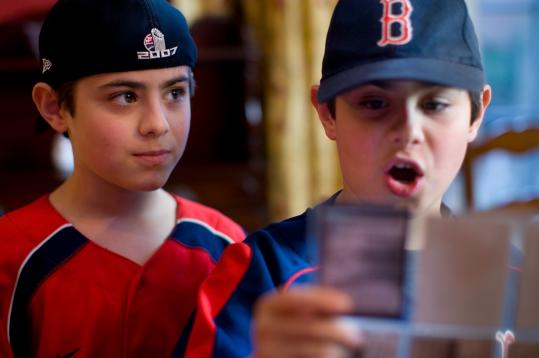 Brookline twins Max (left) and Lucas Kerman have collected autographs of former players in the Negro Baseball Leagues, a project that started as a school lesson. The boys, age 10, hope to open a museum dedicated to the segregation-era leagues. (Dina Rudick/Globe Staff)
By Brock Parker Globe Correspondent / January 1, 2010

With their Red Sox hats and Jonathan Papelbon jerseys, twins Max and Lucas Kerman might appear to be typical 10-year-old baseball fans from Brookline.

But after a recent lesson on stereotypes in school, the boys are proving to be more than your average fans.

Since early November, Max and Lucas, who are fourth-graders at Brookline’s Driscoll School, have been sending letters to dozens of old baseball players from the segregation-era Negro Leagues in hopes of receiving autographs.

“We cautioned them not to get their hopes up too much, just because [the players] are all elderly,’’ said their mother, Adrienne Kerman.

But soon, the boys began receiving one or two responses a day from the former players, such as John “Mule’’ Miles, Neale “Bobo’’ Henderson, and Bill “Lefty’’ Bell.

While most Red Sox fans spend the off season listening to speculation about free agent signings, Max and Lucas have spent their winter break from school waiting for the mail to come each day and researching Negro Leagues players.

Now the boys are thinking about starting their own Negro Leagues museum.

Before their lesson in school, the brothers said they had heard of the segregated league that was the only option for black baseball players before Jackie Robinson integrated Major League Baseball in 1947. But their interest in the Negro Leagues was piqued this fall in school when they read the book “A Strong Right Arm’’ by Mamie “Peanut’’ Johnson.

Johnson was a pitcher and one of three females to play in the Negro Leagues. When Max and Lucas read the book, it helped them understand the challenges that discrimination presented for the players, their mother said.

“Their eyes were opened when they learned these players were not allowed to play in the white leagues and what they had to do,’’ Adrienne said.

The more Max and Lucas read about what the players went through in the segregated league, the more they began to respect the players’ love for the game.

“They had the heart to play even when nobody cared,’’ Lucas said.

The boys were also intrigued by the accomplishments on the field by many Negro League players, such as slugger Josh Gibson and Satchel Paige, who later pitched in the major leagues.

“He might have thrown the fastest pitch ever,’’ Lucas said of Paige, while eagerly vying with his twin brother for a chance to discuss his favorite players.

In mid-November, Max and Lucas found the names and addresses of many former Negro League players on the Internet and decided to send each of them a letter.

In the letter, the boys explained that they think the players from the Negro Leagues “are AWESOME!’’ and sent along index cards with a return envelope for the players to sign and return.

Adrienne said the family sat around a table addressing and stamping almost 120 envelopes to the players.

The boys’ father, Scott Kerman, a self-described “baseball nut,’’ said he wasn’t expecting more than a handful of the players to respond. “We were guessing five,’’ he said.

But in the five weeks since the Kermans began sending out the letters, several dozen players have responded.

“We wanted their autographs, and this was the easiest way,’’ Lucas said.

“We didn’t know all of these would write back,’’ Max said.

Stanley Glenn, president of the nonprofit Negro League Baseball Players Association and a former player for the Philadelphia Stars in the Negro Leagues, said most of his fellow ballplayers have died.

“There are not many left,’’ Glenn said.

But as recently as Tuesday, the Kermans were still getting mail from former players.

Some of the players have sent signed baseball cards and notes. Others have simply autographed the index cards provided in their letters.

The first player to respond was John “Mule’’ Miles, who played in the outfield for the Chicago American Giants from 1946 to 1948 and once hit 11 home runs in 11 games, according to the Negro League Baseball Players Association website.

In a note to Max and Lucas, Miles told them to remember the “three A’s’’ about school: attend, apply, and attitude.

Another former player who responded was Lou “The Grey Cat’’ Clarizio Jr., who told the boys he was one of the only white players who played in the Negro Leagues. He sent the boys two of his baseball cards and signed one of them.

“Obviously these players could feel that we weren’t [memorabilia] dealers, because they gave extra,’’ Scott Kerman said.

“They’ve been very kind to the boys,’’ his wife added.

Max and Lucas received some Negro Leagues memorabilia for their birthday on Dec. 27, and are now interested in combining those items with what they’ve received from the former players to create their museum.

Scott Kerman is an entrepreneur, so Adrienne said it’s not unusual for their boys to get an idea and sit down to craft a business plan. Part of that plan has been drawing up the location for their museum.

“But it’s actually our neighbor’s house,’’ Adrienne said. “I’ve been told I’m going to work at the front desk.’’

The parents said the experiences the players in the Negro Leagues went through were completely alien to their boys, and they are proud Max and Lucas have written the players and seized the chance to get a history lesson.

“Like World War II veterans, how much longer will this generation be around?’’ Scott Kerman asked.

Adrienne Kerman said she’s also happy the boys have been researching the Negro Leagues instead of watching television or playing video games.

“I’m proud of them for doing this, because they’ve put a lot of time into it,’’ she said. “They have such pride in what they’ve learned and they’re fascinated and they want to share it.’’