A place where all belong 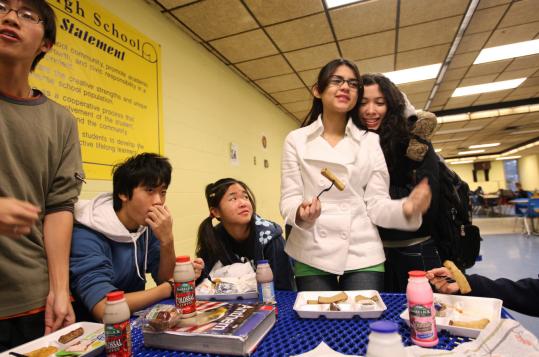 MALDEN - At J&R market on Salem Street, the shelves are stocked with Kenyan tea, Nigerian flour, and Mexican cactuses. The public library boasts a collection of 2,000 books in Chinese, 10 times the count a decade ago. French classes, fading elsewhere, are thriving at Malden High School as Haitian families have poured into the city.

Malden, an unassuming community of 56,000 residents just minutes north of Boston, has quietly become a major destination for immigrants, second in the state only to Chelsea in its percentage of foreign-born residents.

The foreign-born population of Malden has doubled since 1990 to 37 percent, according to US Census Bureau estimates, mirroring a trend of immigrants moving to suburbs evident in communities such as Winchester, Lexington, Melrose, Revere, and others across the nation.

“Malden is great,’’ said Jean Louis, a 42-year-old taxi driver who arrived six years ago from Haiti and moved to Malden because a sister lived here. “My children are safe. There are a lot of great schools. My wife, too, she loves Malden so much.’’

Immigrants have long flocked to this city on the banks of the Malden River, from the Irish and Italians who came to work in the factories at the turn of the 20th century to Jewish immigrants who fled Europe before and after World War II.

Now, immigrants from China, Haiti, India, Pakistan, and Morocco are transforming Malden anew, choosing it for many of the same reasons: affordable housing, decent schools, low crime, access to public transportation, and proximity to jobs in Boston. Chinatown is just eight subway stops away.

The recent influx is remarkable because Malden has avoided conflicts that have caused divisions in other cities and towns, according to city officials here and advocates for Chinese, Haitian, and Muslim immigrants.

St. Peter’s Parish on Pearl Street, a longtime Italian church, is now Eglise de Dieu de la Grace, a Haitian Seventh Day Adventist church. A mosque opened more than a year ago above a pharmacy downtown, attracting hundreds of mostly Moroccan immigrants for prayers each week. Malden High principal Dana Brown bans tests or homework on Chinese New Year, so that students can celebrate with their families, and recently led a school trip to China.

Though Malden is outwardly peaceful, advocates say the city should do more to promote civic engagement by newcomers, by hiring more employees of different backgrounds or bilingual liaisons who can communicate with different groups. Boston, for instance, has an Office of New Bostonians, and the state has an advisory board for immigrants and refugees.

Mohamed Brahimi, founder and interim president of the Moroccan American Civic and Cultural Association in Malden, wants the city to set up an advisory board of immigrants to recommend ways to better integrate the new arrivals.

“It would give the constituents of the city a feeling that they all belong,’’ Brahimi said. “The person will start saying, you know what? I’m part of this city and the city cares about what I’m saying, instead of saying, we know what’s best and you guys are just there. You pay the taxes and that’s it.’’

Nekita Lamour, a Haitian immigrant who ran unsuccessfully for City Council this year, said she is pushing for more immigrants to get involved in civic life, such as running for public office to improve their neighborhoods. On her street, the abandoned train tracks are choked with weeds, the sidewalks are broken, and the house next door is strewn with debris.

“It’s been like this for a year,’’ she said, with a shake of her head.

Howard, a Democrat, said his policy is to treat people of all backgrounds fairly. He said he has hired additional bilingual firefighters and police officers, provided grants to fund English classes at nonprofits, and makes occasional appearances on Chinese-language TV.

“Our contention would be that people are happy,’’ said Howard, the grandson of Irish immigrants who has been mayor for 14 years. “People are happy with the fact that they live in a community that is kind of safe and they’re not being unfairly picked upon or singled out because of their particular background.’’

Budget cuts have prevented additional hiring, but he said he would be open to an immigrant advisory board. “I wouldn’t hesitate a moment to have it,’’ he said.

Malden’s schools have been at the forefront of the changes. Brown, the principal, said the school system is far different from the one he graduated from in 1977. In 1993, minorities accounted for 28 percent of students; now they make up 64 percent. Nearly 40 percent of students speak another language at home.

But Brown said the children of immigrants and their parents appear to be eager to seize the opportunities they are given, which is one reason Malden’s schools, though struggling, often test higher than other urban schools. He recently gave a talk at a local church to Haitian parents eager to participate in the schools.

In the high school cafeteria early one morning last week, students chatted easily in English over pancakes at breakfast. Garvin Cius, a 15-year-old sophomore whose parents are from Haiti, said his family moved from public housing in Arlington to Malden when he was in the fourth grade because they could afford to buy a home. Now he is setting his sights on college and said he wants to be an engineer.

“I feel safe here,’’ he said. “There are no worries. Everyone knows each other.’’

Anielly Zeferino, a 15-year-old sophomore from Brazil, said she was overwhelmed when she first came to the United States several years ago and could not speak English, but she felt that Malden embraced her. Now she speaks English with barely a trace of an accent.

“This is my second home, basically,’’ she said of Malden.

For their parents, the biggest attraction in Malden is the price of housing, then the schools. Many residents said they fled higher rents in Cambridge, Somerville, and Boston for Malden, where they have easy access to the T but fewer headaches with parking, traffic, and the cost of living.

In the Bel Bébé hair salon on Salem Street, Marthane Jeune rolled her eyes as she recalled her cramped apartment in Everett. For a little more than $300,000, she was able to buy a six-bedroom fixer-upper in Malden, where her husband and three children have space to breathe.

“I’m like a bird. Freedom!’’ said Jeune, 43, throwing up her hands as she waited for customers in her salon.

San San Mew, a 39-year-old tailor from Myanmar, said that Malden fits perfectly into her hectic lifestyle. The rent is cheaper than Boston, and her children attend K-8 schools, so she does not have to shuttle from one school to the next. She works days, and her husband works nights.

“It saves the time,’’ she said, running a steam iron over a pair of tweed pants in the cramped shop. “Bus. Train. Everything is easy here.’’