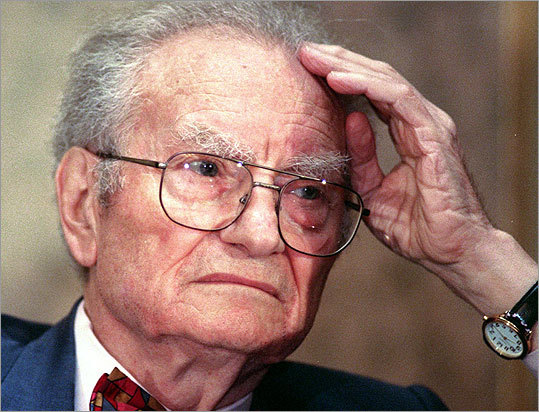 Paul A. Samuelson, a giant of 20th-century economics and the first American recipient of the Nobel Economics Prize, who helped popularize the Keynesian revolution and introduce generations of undergraduates to economics through his famous textbook, died today at his home in Belmont. He was 94.

The announcement of his death came from the Massachusetts Institute of Technology, where Dr. Samuelson was Institute professor emeritus. He had been on the MIT faculty since 1940.

"The entire world of economics was transformed by Paul’s work," Ricardo Caballero, head of the Department of Economics at MIT and Ford International Professor of Economics, said yesterday. "I would argue that the way we do economics is due to him."

Dr. Samuelson might best be described as an economist's economist. Partly, that was owing to sheer ability. A famous story concerns the oral examination for his doctorate: at its conclusion, one professor asked another, "How’d we do?"

Even as a graduate student, Dr. Samuelson was publishing papers that made a notable contribution to economic theory.

His "Collected Scientific Papers" would eventually take up five hefty volumes. When his dissertation was published as "Foundations of Economic Analysis" (1947) no reviewer complained the title was excessive.

Dr. Samuelson's special status within the profession sprang from more than just technical prowess. Other renowned economists, such as John Maynard Keynes (with deficit spending) or Milton Friedman (with limiting the role of government), made their greatest impact on public policy. Dr. Samuelson's primary emphasis was on economics itself.

"He’s such a professional giant for every economist. It’s an immense loss," said James Poterba, Mitsui Professor of Economics and the former head of the economics department at MIT.

Dr. Samuelson very much believed economists had a public role. He served in advisory capacities in five administrations and wrote a column for Newsweek from 1966 to '81. But such obligations remained secondary for him. Instead of wanting to change the world, he wanted to change a discipline -- or, as he preferred to call it, a science.

No figure played a more important role in making mathematics decisive in the practice of economics. Mathematics had always been important in the field; Dr. Samuelson made it essential. In "Foundations," he famously dismissed the efforts of earlier economists to verbalize concepts that better lent themselves to mathematical expression.

"The laborious literary working over of essentially simple mathematical concepts such as is characteristic of much of modern economic theory is not only unrewarding from the standpoint of advancing the science, but involves as well mental gymnastics of a particularly depraved type."

What had been a largely verbal discipline, Dr. Samuelson declared "an Augean stable full of inherited contradictions, overlaps, and fallacies." One could infer that the author of those words was Hercules, one of whose labors was cleaning out Augeas' stable. It's a mark of Dr. Samuelson's achievements that few experts would challenge such a comparison.

As the Swedish economist Assar Lindbeck said in the speech at Dr. Samuelson's Nobel presentation, "more than any other contemporary economist, he has contributed to raising the general analytical and methodological level in economic science. He has in fact simply rewritten considerable parts of economic theory." Or as the University of Illinois at Chicago economist Deirdre McCloskey wrote in an otherwise-critical article in 2002, "It's only fair to call the method of modern American economics 'Samuelsonian'"

Dr. Samuelson liked to describe himself as the "last generalist" in economics. That status was a tribute to the capaciousness of his intellect, the dazzling diversity of his interests -- and the fact that, in no small part because of him, the field had become much more complex than when he had started out.

Economics had also become vastly more popular, a transformation in which Dr. Samuelson played no small part. "Let those who will write the nation’s laws, if I can write its textbooks," he once quipped.

Since the publication of its first edition, in 1948, Dr. Samuelson's "Economics: An Introductory Analysis" has sold more than 4 million copies and been translated into more than 40 languages. New editions continue to appear (the book is on its 19th in English). Since the 12th edition, in 1985, Dr. Samuelson had a co-author, William D. Nordhaus.

The first textbook to focus on Keynesian economics, as well as the first to teach macroeconomics in addition to microeconomics, it became a publishing phenomenon. In 1959, Business Week magazine wrote that Dr. Samuelson's textbook "has gone a long way toward giving the world a common economic language."

"The textbook introduced the study of economics to literally millions to undergraduates," said Poterba, a former MIT economics director who was a colleague of Dr. Samuelson's for 27 years. "On many college campuses, studying economics was just synonymous with studying Samuelson’s textbook."

One reason for the book's success was its demonstration what a lucid and often witty stylist Dr. Samuelson could be. “I’m told the book is well written,” he said in a 1965 Newsweek interview. “It should be. I sweated blood over it.”

Another reason was Dr. Samuelson’s alertness to the interests of prospective readers. "What sex is to the biology classroom," he wrote in a 1999 issue of The Journal of Economic Education, "stock and investment riskiness is to the sophomore economics lecture hall." He made a point of including a chapter on personal finance so as "to keep hard-boiled MIT electrical engineers awake."

The textbook not only increased Dr. Samuelson's wealth and greatly extended his influence. It made him a brand name.

"Contact with hundreds of thousands of minds of a whole generation is an experience like no other that a scholar will ever meet," he recalled once in an essay. "At annual American Economic Association meetings I was besieged by groupies.... I never knew what to say when people would tell me, 'We use your book.' One day, I heard myself saying, 'Mrs. Samuelson will be pleased,' and that has solved my problem ever since."

Paul Anthony Samuelson was born on May 15, 1915, in Gary, Ind. His parents were Frank Samuelson, a pharmacist, and Ella (Lipton) Samuelson.

After attending public schools, he entered the University of Chicago in 1932. The Great Depression was at its worst, making it "a great time to be born as an economist," as Dr. Samuelson wrote in an autobiographical essay included in a 1986 collection, "Lives of the Laureates."

Dr. Samuelson graduated from Chicago in 1935. He accepted a fellowship at Harvard and studied with Joseph Schumpeter and the foremost American follower of Keynes, Alvin Hansen. He was chosen for membership in Harvard’s prestigious Society of Fellows.

Dr. Samuelson's talents were so obvious many were surprised when Harvard failed to offer him a faculty position. Its failure to do so has often been ascribed to anti-Semitism. In "The Academic Scribblers," a study of 20th-century American economists, William Breit and Roger L. Ransom also cite Dr. Samuelson’s youth and brashness. MIT having no such reservations, Dr. Samuelson switched Cambridge addresses.

"MIT's force met no detectable Harvard resistance," he wrote in "Lives of the Laureates," "so the movable object moved. It was the best thing that could have happened." For the university as well as Dr. Samuelson: His presence later helped attract such fellow future Nobel laureates as Robert M. Solow and Franco Modigliani to the MIT economics department and make it for many years preeminent in the field.

During World War II, Dr. Samuelson served as a consultant for the National Resources Planning Board, the War Production Board, and the Office of War Mobilization and Reconstruction. He also worked at MIT's Radiation Laboratory on the development of computer tracking of aircraft. After the war, Dr. Samuelson worked as a consultant for the US Treasury, the Bureau of the Budget, and the Rand Corp.

Although he served as an economic adviser to US Sen. John F. Kennedy (D-Mass.) heading an economic task force during his presidential transition and helping shape tax policy, Dr. Samuelson declined an offer to serve as Kennedy’s chairman of the Council of Economic Advisers. He continued to advise Kennedy, but in an informal capacity. He also later advised the Johnson administration on economic matters.

He was among a circle of JFK advisers, that also included John Kenneth Galbrait, who led Kennedy to recommend the historic income tax cut that Congress eventually passed in early 1964, three months after the president was assassinated.

"A temporary reduction in tax rates on individual incomes can be a powerful weapon against recession," Samuelson had written in a report to Kennedy in early 1961.

The cut was widely credited with helping foster the 1960s economic boom.

Dr. Samuelson, who said he subscribed to "eclectic liberalism" in his politics, played a role in the next administration as well -- albeit of a highly different sort. He was on the Nixon White House enemies list.

Dr. Samuelson amassed numerous professional honors over the course of his career. "Just as it is the first million that is the hardest," he wrote in "Lives," "one honor leads to another. After the first dozen honorary degrees, all it takes is longevity to double the number."

In 1970, Dr. Samuelson won the second Nobel Economics Prize. "The honor came early," he once wrote, "but not so early as to worry even me."

A private funeral service will be held. MIT will hold a memorial service for Dr. Samuelson at a date to be announced.