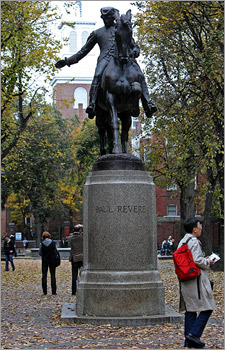 Some residents of Boston's historic North End say the neighborhood, known as an Italian enclave and the former home of Paul Revere, is being overrun by rodents. (Globe File Photo)
By Michael Levenson Globe Staff / December 1, 2009

“It’s as if we’re living in a Third World country, and our community has turned into a rat infestation nightmare, causing property damage and spreading disease,’’ Anne M. Pistorio, a member of the North End/Waterfront Residents’ Association, told a hearing of the City Council.

City officials acknowledged that rats are plaguing a few areas, but they denied that the problem is worsening.

“I don’t characterize it as a rodent problem; there’s rodent activity,’’ said Leo C. Boucher, the city’s assistant commission er of inspectional services who has gone on several 4 a.m. rat patrols, setting traps in the darkened streets of the North End and other neighborhoods. “From what we see, and we do see, there have been isolated hot spots.’’

Councilors called the hearing on Boston’s rodents after fielding rat-related horror stories from residents across the city. Several, frustrated at what they called a mounting problem, discussed restricting the hours when residents can put out trash, or making it easier for city inspectors to collect fines from residents and business owners who violate sanitary codes.

“For some reason, it seems like it’s getting bigger and bigger in regards to the problem,’’ Councilor Salvatore LaMattina said of rats in the North End, which he represents. “For the people who live in those areas, this is an emergency.’’

Janet Gilardi, 64, a lifelong resident of the North End, said she sees rats scurrying across the street in her neighborhood and that her son is reluctant to sleep in her basement when he visits from California.

“They’re scary,’’ Gilardi said of the rats she sees feasting near her Fulton Street home. “They’re defiant. They look at you like you’re the nut. I mean, I just can’t handle this any longer. It’s an awful, awful situation.’’

City officials said they had received 1,522 calls complaining about rats in fiscal 2009, an increase from the previous year. The issue flared during the mayor’s race, when Councilor at Large Michael F. Flaherty Jr. accused Mayor Thomas M. Menino of paying insufficient attention to the rat problem, which Menino denied.

Boucher said inspectors had trapped 90 rats in one “major infestation’’ on Endicott Street. He said the city hopes to reduce the problem by setting more traps and urging residents and business owners to seal their trash tightly before hauling it to the street.

“I’m not happy until there’s none,’’ Boucher said of the city’s rats. “Will there ever be none? I’m not sure that’s possible.’’

William Good, the city’s inspectional services commissioner, told the council rats have been plaguing Bostonians since the 17th century, and “are an aspect of life in a city that’s this old.’’

But, he said, “That doesn’t mean we can’t reduce the problem to a tolerable level.’’