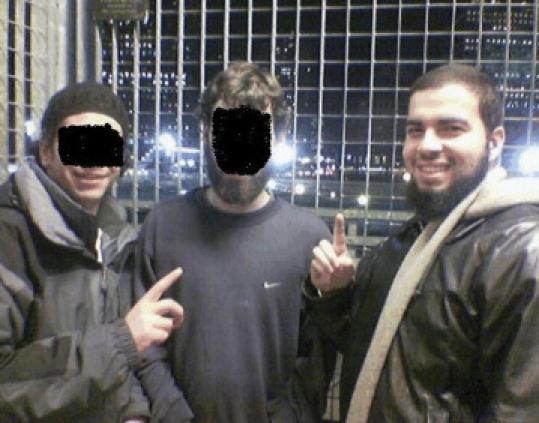 Mehanna, a graduate of the Massachusetts College of Pharmacy, was arrested Oct. 21 at his parents’ home in Sudbury on federal charges.
By Jonathan Saltzman and Shelley Murphy Globe Staff / November 6, 2009

Two weeks after a Sudbury man was arrested in an alleged terrorist plot to kill Americans, federal authorities announced his indictment yesterday along with a former Mansfield man they say is now in Syria.

Tarek Mehanna, 27, of Sudbury and Ahmad Abousamra, 28, who last lived in Mansfield, were charged in a 10-count indictment with providing and conspiring to provide material support to terrorists, conspiracy to kill in a foreign country, and other charges. Abousamra left Boston for Syria nearly three years ago after being questioned by the FBI, according to the bureau.

Acting US Attorney Michael K. Loucks also released two undated photos of Mehanna smiling at Ground Zero in New York City with friends, as well as excerpts of conversations he allegedly had online in which he expressed admiration for Al Qaeda, the 19 hijackers who participated in the 9/11 attacks, and Osama bin Laden.

Mehanna, a graduate of the Massachusetts College of Pharmacy, was arrested Oct. 21 at his parents’ home in Sudbury on federal charges and is being held without bail. Prosecutors say he with Abousamra to join a terrorist camp overseas, to launch an attack on shoppers at a suburban American mall, to assassinate two members of the US government’s executive branch, and to attack US soldiers in Iraq and Afghanistan.

The two men had been friends since childhood, having met at the Sharon mosque run by the Islamic Center of New England, according to a person who knew them.

However, Mehanna’s primary weapons were “a keyboard and computer,’’ the government said in a memorandum in which prosecutors urged the court to hold him until trial.

Mehanna, prosecutors say, was a blogger who promoted jihad, or holy war, online, hoped to become part of Al Qaeda’s “media wing,’’ and was translating a document called “39 Ways to Serve and Participate in Jihad’’ for a radical jihadi website.

He also allegedly reveled in the misfortunes of westerners abducted or killed overseas, such as Jill Carroll, a Christian Science Monitor journalist kidnapped in Iraq but later freed.

Boston attorney J.W. Carney Jr., who represents Mehanna, declined to comment yesterday about the indictment or filings by prosecutors.

In a recent interview, Abousamra’s father disputed the FBI’s suggestion that his son fled to Syria in December 2006 after being questioned by the FBI.

“My son is the most peaceful man,’’ said Abdul Abousamra, a prominent doctor who worked at Massachusetts General Hospital for 21 years before moving to Michigan two years ago

He said that he is in touch with his son and that the young man was shocked by the allegations.

Dr. Abousamra said his son went to Syria to be with his wife after graduating from UMass Boston with a degree in computer science. He said his son has been in contact with US immigration officials, who have his address in Syria, for more than a year while trying to help his wife obtain a visa to return to the United States with him.

He said his son has been taking care of his wife, daughter, and grandparents while in Syria.