A final face-off in mayor’s race 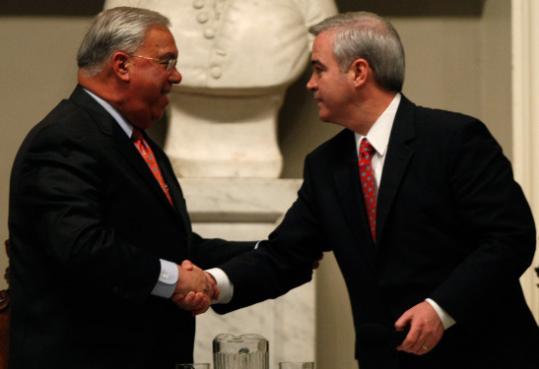 Mayor Thomas M. Menino and his challenger, Councilor at Large Michael F. Flaherty Jr., painted starkly different portraits of Boston in their final debate last night, as the long-term incumbent proudly declared, “The city is going forward,’’ while his rival insisted, “We’ve been stuck in neutral.’’

With just one week to go before voters head to the polls Nov. 3, the two men jousted over education, drug-and-alcohol testing for public safety personnel, and diversity in the city leadership during a wide-ranging, heated, but civil debate at historic Faneuil Hall, which for nearly three centuries has hosted key political events in Boston.

Menino, the longest-serving mayor in Boston’s history now seeking an unprecedented fifth term, boasted of increases in the city population, declining crime rates, and new businesses opening as he made the case for his reelection.

Flaherty, a former prosecutor who has served on the City Council for nine years, cited what he said are unacceptably high murder rates and high school dropout rates, as he argued for a change in leadership.

Menino, 66, said he was proud of the progress made over the last 16 years, even as he acknowledged that some areas, such as education, have not improved as much as he would like.

“That’s what we’re doing in my administration, making your life a little better,’’ the mayor said. “I believe the city is going forward. . . . Let’s continue to make this a city that works for all of us.’’

The event, sponsored by MassVote, a nonpartisan voting rights group, was not televised, but was broadcast live - except for a several-minute period when the radio signal was lost - on WTKK-FM.

Flaherty, reinforcing his argument that Boston is not doing well enough, said 24,000 children dropped out of the public schools over the 16 years of the Menino administration. He also said that 100 out of 143 schools in Boston are underperforming, and 59 percent of high school students do not graduate in four years. Flaherty also said 1,000 people were murdered during the last 16 years, declaring: “We can do better. We can’t wait four more years.’’

But Menino said that 75 percent of children in the schools go on to college, that the crime rate is down for the fourth year in a row, and that new businesses have opened in the city.

“This is a Boston that is looking forward, making progress every day, a better city every day,’’ the mayor said. “It’s not about Tom Menino alone. It’s about the community groups out there that partner with us. That’s what we do in my administration, partner with people.’’

Perhaps the sharpest exchange of the night centered on the schools. Menino, pressed by Flaherty on the issue, at first argued that the term “underperforming school’’ was misleading because of the number of special needs and non-English-speaking students in Boston. He also said that relatively wealthy suburban communities, such as Brookline and Weston, have underperforming schools.

Flaherty pounced on that statement, accusing Menino of downplaying the problems in the Boston schools.

“I’m not running for mayor of Brookline and Weston,’’ Flaherty said. “I’m running for mayor of Boston. And the barometer I use is 24,000 kids have dropped out of Boston public schools. Let’s ask ourselves: ‘Are they working? Do they have an education? Are they incarcerated? Are they dead? And how many of their children are now in the Boston public schools?’ That’s who I’m fighting for.’’

Flaherty also vowed to serve no more than four years if he cannot improve the schools as mayor. “After my first term, if there are not significant gains in enrollment, in graduation rates, and in Boston public school kids going on to college, then I will not run for reelection,’’ Flaherty said.

The candidates also sparred over mandatory drug-and-alcohol testing for firefighters. Boston Firefighters Local 718 has been locked in a protracted battle with the Menino administration over whether to agree to such testing without additional pay.

Menino said he has been pushing the firefighters to agree to “real testing for real men,’’ but the union has continued to demand additional pay. “They want to get paid to take the test,’’ Menino said. “Is that fair? It’s not fair.’’

Flaherty, who has been endorsed by Local 718, said he would require drug-and-alcohol testing for all public safety personnel and city workers who operate heavy machinery. He did not say whether he would agree to additional pay in return for testing. “Mandatory random drug-and-alcohol testing under a Flaherty administration will actually be a condition of employment,’’ he said.

Menino was also pressed over the racial makeup of his administration.

The mayor, whose 13-member Cabinet includes three minorities, argued that he should not be judged solely on the diversity of his top aides.

Flaherty said he would appoint a more diverse Cabinet. He pointed as an example to Councilor at Large Sam Yoon, the first Asian-American city councilor in Boston, whom he has promised to appoint as deputy mayor, if he is elected. Under a Flaherty administration, he said, top city officials “will actually for the first time look like the city of Boston.’’ Pointing to the diverse audience at Faneuil Hall, he said, “You’ll all be a part of the Flaherty administration.’’

There was one moment of humor during the debate, which occurred when Menino was asked if he supported mandatory retirement ages for city workers. Smiling mischievously, he said, in an obvious reference to his own longevity in office, “I don’t believe in mandatory retirement.’’ The audience laughed.

Flaherty said he, too, would not support mandatory retirement policies and then joked “with the exception of the office of mayor of Boston.’’ Flaherty, unlike Menino, does support limiting the office of the mayor to two, four-year terms.