Burn victim finds love with her US family 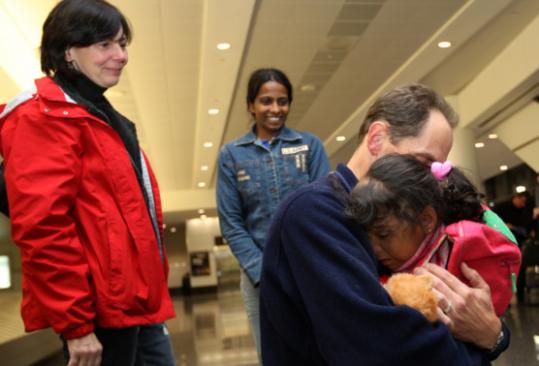 When the little girl from Sri Lanka found her American family in the baggage claim area at Logan Airport late Sunday night, she curled up into the arms of the man she calls “my daddy.’’ Evan Katz of Groton crouched on the floor and quietly hugged Hasi for several minutes, while passersby looked on and smiled.

Buried in Katz’s arms, Hasi looked like a typical 5-year-old, with her long black hair splayed across her small pink backpack. When she peeked out from the crook of his arm, however, the trauma she has endured was apparent.

Severely burned as an infant in a fatal attack by her Sri Lankan father on Hasi’s mother, Hasi has undergone several procedures at Boston’s Shriners Hospital for Children to repair damage. She will need almost constant medical care until adulthood.

Katz and his wife, Liz Smith, are sponsoring Hasi’s stays in America. At some point they would like to obtain full guardianship of the girl, who lives in a children’s medical center when she is in her native country. For now, they just want Hasi to know that she has a home and a family in Massachusetts.

This afternoon, the family is planning to host a celebration for Hasi at the Union Congregational Church in Groton, with a silent auction and performances by a children’s musician and a Sri Lankan music and dance troupe. Marking the beginning of Hasi’s third stint in Groton, it is the first fund-raiser the family has organized.

Although Shriners sees its patients free of charge, conducting regular surgeries on Hasi’s deformed right hand and ear and grafting new skin around her joints, costs of her routine medical visits for skin problems and immunizations add up. So have plane tickets for the girl and her caregivers.

With Hasi scheduled to begin kindergarten at the Florence Roche Elementary School, she has become a well-known presence around town, said Smith, an apparel industry consultant who first met Hasi during her extensive travels in Sri Lanka. “It’s a small community, and we’re in and out of so many places of business - ballet lessons, preschool, the grocery store,’’ she said. “Her doctor’s office took up a collection. The nurse there loves her to death.’’

At 5, Hasi is well aware that her burns make her stand out. During an elementary school orientation, an older boy yelled, “What happened to you?’’

Yet Hasi’s personality has blossomed in her new home. “She’s just an amazing kid,’’ said Smith.

Smith, he said, has done exemplary work in communicating Hasi’s needs to both him and the staff at Shriners. “In terms of having an involved parent, she’s a star,’’ said Coleman.

On this trip, Hasi is accompanied by her favorite caregiver, Ruveni Balasooriya, a Sri Lankan nurse who has already lived in Smith and Katz’s house. They returned to Sri Lanka in January - Ruveni had family affairs to attend to - and Hasi came back in April with a new caregiver. But the young woman was unhappy, and Hasi, who can’t be here without a Sri Lankan nurse, had to leave in June. Sending them back “was a very difficult moral decision for us,’’ said Smith, who is in negotiations with the Sri Lankan government. “We never know for sure if she’ll be able to return.’’

Though they know Hasi will have to return to Sri Lanka sometime after the new year - Ruveni is getting married - Smith and Katz, who share three grown sons from previous marriages, say they’re trying to create stability for Hasi. “We’re hoping this goes on a long time,’’ said Katz.