Demonstrators in the pink in Copley Square 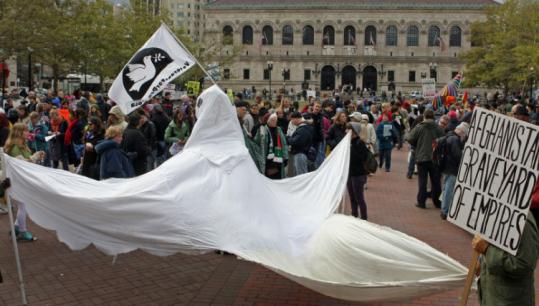 The regional gathering in Boston - one of more than 40 nationwide - brought protesters from throughout New England to shout, sing, and march against conflicts in Afghanistan, Pakistan, and Iraq.

Karyn Savage, a 26-year-old mother of two from central Maine, clutched a magenta poster covered in glitter glue and peace signs that read: “War is Expensive, Peace is Priceless.’’

Savage, drenched in hues of pink, from a bubble gum tutu to fuchsia ribbons in her hot pink hair, and her husband, Jacob, 23, dressed in a matching tutu trekked three and a half hours to march with CODEPINK, a women’s peace group. The group’s name is a play on the color-coded homeland security alerts.

“You’ve got innocent people being killed every day, and that’s not justice,’’ said Savage, one magenta and one rose glove wrapped around her sign.

A giant dove constructed from sheets and chicken wire carried a piece of sparkly green garland in its beak. Guitarists and rappers belted out politically charged lyrics on a nearby stage.

Rachel Hellmann, a 32-year-old teacher from Chelsea, bounced her 1 1/2-year-old daughter Gloria in a baby carrier that bore a fluorescent yellow sticker: Stop the War$.

Hellmann said the money directed toward the wars could be better spent on domestic issues such as health care, education, and job creation.

Some said the rally was a call to action to speak up for peaceful solutions.

“It’s the beginning of the rebirth of the peace movement,’’ said Mike DeRosa, 52, a computer programmer from Wethersfield, Conn., whose yellow sticker matched Gloria’s.

A gaggle of protesters tucked away cellphones and turned off cameras as a 28-year-old Afghani woman known as Zoya spoke against the conflict in her homeland.

“We want to thank those American soldiers who refused to go to Afghanistan, who refused to kill our children and women,’’ she said, sunglasses and a red scarf shielding her face from photographs that organizers said could jeopardize her safety.

Zoya, a member of the Revolutionary Association of the Women of Afghanistan, said her homeland does not need more occupation.

“Eight years was quite enough time to prove they aren’t helping the situation,’’ she added in an interview after her speech.

Zoya, whose parents were killed by fundamentalists, said, “When you belong to a generation of war, you can either give up and accept the situation or resist, and I resist.’’

A mother whose son has served in Iraq and Afghanistan, told the crowd of the dangers of war.

“We have created a whole new generation of wounded, maimed, and traumatized veterans,’’ Sarah Fuhro of Natick said.

Some protesters said the antiwar movement has been reluctant to criticize military decisions in Afghanistan, Pakistan, and Iraq since President Obama took office. During his campaign, he promised to start bringing troops home.

Obama has met with a war council to discuss whether to send thousands more troops into Afghanistan or shift the focus on special raids. Tens of thousands of American troops remain in Iraq.

“War is war, whether it’s Bush’s war or Obama’s war,’’ said John Harris, 57, of Chelsea, who helped organize the rally.

Suzette Abbott, 65 of Brookline, said she campaigned for Obama in New Hampshire and now expects results, especially since he has been awarded the Nobel Prize for Peace.

The retired kindergarten teacher juggled a rainbow peace flag and a mustard poster that read: “YES WE CAN GET OUT OF AFGHANISTAN.’’

“Obama needs to make good on his promises,’’ Abbott said. “We all worked to get him elected. Now, he needs to earn that peace prize.’’