Her message finally got across 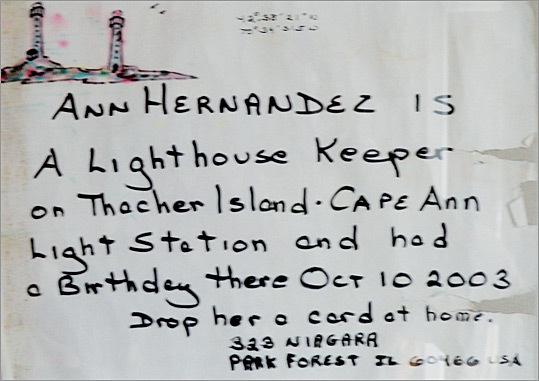 Ann Hernandez's message in a bottle was retrieved by Michel and Daniele Onesime in France.
By Sarah Schweitzer Globe Staff / October 2, 2009

Each year on her birthday, Ann Hernandez and her boyfriend, Alan Tomaska, would settle on the rocky shore of Thacher Island and uncork a bottle of champagne in a toast to the day. When the bottle was empty and the tide going out, Hernandez would tuck a handwritten message inside and Tomaska would hurl the bottle over the rocks and into the crashing surf.

Tomaska considered the ritual a lark.

But for Hernandez, the messages in a bottle were a kind of personal driftwood - a piece of her joining the sea and traveling with its currents to hoped-for far-flung locales.

“When we got back to our humdrum lives, we didn’t talk about the bottles,’’’ said Tomaska, a home remodeler. “But whenever we were on the island, she would say, ‘One of these days, someone is going to find one of those bottles.’ ’’

It would take six years, but someone did. Defying nautical laws and odds, one of Hernandez’s bottles last month bobbed along the coast of France to a quaint village, where a French couple, Michel and Daniele Onesime, scooped it out of the water and read with wonder the note inside.

“While we were setting out to go deep-sea fishing one morning from the port at St. Gilles Croix de Vie, on the Vendee coast, my wife and I found a white glass bottle floating by,’’ Michel Onesime wrote in an e-mail to the Globe. “The moment we plucked it from the water, we saw that there was a message inside.’’

The message read: “Ann Hernandez is a lighthouse keeper on Thacher Island - Cape Ann Light Station and had a birthday there Oct 10 2003. Drop her a card at home.’’ The message included her year-round Illinois address. The Onesimes quickly jotted a postcard and sent it off.

But the connection was not to be.

The postcard came back to them marked undeliverable. When the couple sent an e-mail to the Thacher Island Association, it reached its president, Paul St. Germain, who relayed sad news. Hernandez unexpectedly died at age 61 from complications of surgery the day before Thanksgiving last year.

Since then, the Onesimes have joined in mourning Hernandez and found themselves linked to her friends and loved ones - a connection forged, in this age of instant communication, not through text message, not through e-mail, but through a bottle that withstood a 3,000-mile trip across the ocean.

Her boyfriend “sent us pictures of him and Ann, and told us how she had thrown a bottle into the sea every year since 1991. It’s a beautiful story. We would love one day to visit this island and get to know all our new friends,’’ Onesime wrote in his e-mail.

St. Germain said the Onesimes’ find made Hernandez feel not so far away.

“It’s like someone was pulling the strings up there on everyone down here on earth - saying Ann is still there somewhere,’’ he said.

The sea always held an allure for Hernandez. Her family had moved from Beverly to Illinois when she was a child, and she had made her professional career as a head of a social services nonprofit there. But she often traveled back to the North Shore, and in 1991, she and Tomaska, her longtime companion, began what became an annual turn as volunteer keepers of Thacher Island’s North Tower lighthouse. The island is three-quarters of a mile offshore from Rockport and home to the nation’s only operating twin lighthouses. The North Tower is a solar-powered amber light manned by the Thacher Island Association as a courtesy to mariners; the South Tower is still operated as an official aid to navigation by the Coast Guard.

The couple customarily arrived in October, when crowds had thinned and they could enjoy in relative solitude the island’s bluffs overlooking cobbled beaches, its hawks and falcons, and views from the lighthouse spanning the Boston skyline, the New Hampshire shoreline, and Mount Agamenticus in Maine.

“Ann loved everything about it. The nature, the semiroughness,’’ Tomaska said.

Hernandez began casting out the messages in bottles during their first year on the island, which happened to be the month of the Perfect Storm. Only one of the bottles was found during her lifetime - in Marshfield, a place that Hernandez dismissed as not exotic enough to merit excitement.

A quaint fishing village on the western coast of France, her friends said, was just the sort of place where Hernandez would have loved to see her message in a bottle land.

This weekend, Tomaska will return to the island, for the annual October stay. It will be his second visit to the island since Hernandez’s death.

But he said he takes comfort knowing that at long last, one of Hernandez’s bottles has found a proper home.

“I am so happy this came about. It’s like, OK, give her recognition.’’