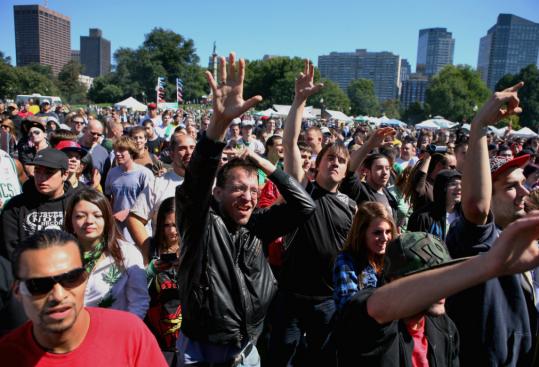 The passage of Proposition 2 gave the large crowd a reason to celebrate yesterday at the Boston Freedom Rally, a pro-marijuana event that marked its 20th anniversary this year. (Wendy Maeda/ Globe Staff)
By Michael Corcoran Globe Correspondent / September 20, 2009

There was not a cloud in the sky over the Boston Common yesterday during the 20th annual Boston Freedom Rally, but there was plenty of smoke.

It was the first time the pro-marijuana rally organized by the Massachusetts Cannabis Reform Coalition had been held since the November election, when voters passed Proposition 2. The ballot initiative made possession of less than an ounce of marijuana a civil offense rather than a crime.

The changed law gave the large crowds in attendance yesterday a new reason to celebrate and one less reason to get arrested - an outcome that organizers said is a welcome change. The event has caused controversy over the years because of many arrests and battles with the city over permit issues. This year, as in the past, many people smoked marijuana openly as an act of civil disobedience.

“After years of helplessly watching Boston Police bag harmless stoners, it will be a joy to see people enjoying themselves without the threat or fear of arrest,’’ said Keith Saunders, president of the reform coalition, on the rally’s website.

“This is a victory party,’’ said Bill Bones, a long-time board member for the coalition, also known as MassCann. “We got 65 percent to come out and vote for freedom. Too many people make mistakes when they are young, and then get slapped with a criminal record. Well they are not criminals, and we are celebrating this today.’’

Gary Gossum, 50, of Boston, said the new law was the major reason he attended the festival this year. “I have come to this event off and on, but hadn’t been coming in the most recent years. It was getting too hard,’’ he said. “But now it is nice again, since marijuana is decriminalized.’’

The more lenient policies, however, did not stop law enforcement officers from issuing 136 citations of $100 each for marijuana possession and making three arrests for possession with intent to distribute, according to Officer James Kenneally, spokesman for the Boston police. He said the event was peaceful.

Even with the passage of Proposition 2, which took effect Jan. 2, it is still illegal to smoke marijuana in public. But an arrest for possession of under an ounce of marijuana is punishable with a civil fine of $100 and not a criminal penalty.

Previously, simple possession was a misdemeanor that carried penalties of up to six months in jail, a fine of up to $500 and was listed as a criminal record. Under Proposition 2, violators under 18 must attend a drug-awareness program that includes 10 hours of community service within a year of the citation, or the fine increases to $1,000.

Sean McGivney, 19, of Hampton, N.H., was one of those who received a citation for possession of marijuana at yesterday’s rally.

“We were sitting politely, minding our own business, making a point not to smoke when people were around. That is when a guy came up and told us to ‘hand it over,’ ’’ McGivney said. “I am glad the laws are more lenient, but I don’t think it’s enough.’’

Last year, six arrests were made for possession, many fewer than in previous years. In 2006, 53 were arrested on marijuana-related charges.

Some attended the rally to spread the word about other drug law issues, including a move to lessen penalties for students with campus drug offenses.