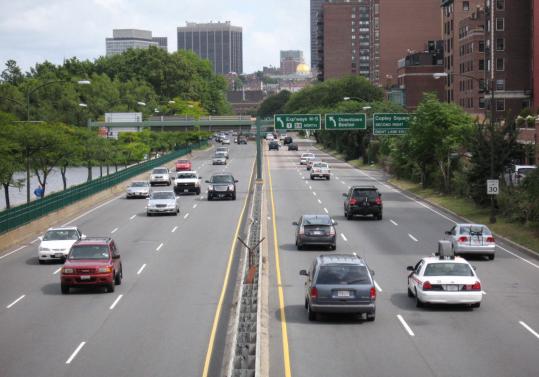 A tipster wonders why there “rarely is a police cruiser seen enforcing the speed limit’’ on Storrow Drive. (Christina Pazzanese for The Globe)
September 12, 2009

A second tipster asks why the DCR has oversight at all over any roadways given that its expertise is conservation and recreation. “DCR should not be charged with the management of major roads,’’ writes Elizabeth Foote. “They proved with their handling of Nonantum Road over the past decade or so that they cannot act with reasonable speed and good judgment about serious road safety hazards and essential maintenance,’’ she writes. “It doesn’t make any sense for a parks and conservation agency to be in charge of heavily traveled state thoroughfares. Why doesn’t the state consolidate management of major commuting highways into a single state transportation agency, which would be charged with road safety and management, not a parkland agency.’’

THE STATE RESPONDS
Rick Sullivan, DCR commissioner, said the agency intends to hand the authority over eight major roads and 190 vehicular bridges to the state’s Executive Office of Transportation. Effective Nov. 1, McGrath and O’Brien Highways in Cambridge and Somerville, Carroll Parkway and Middlesex Avenue in Medford, the William Casey overpass in Jamaica Plain, Columbia Road in South Boston, Morton Street in Boston, and Gallivan Boulevard in Dorchester will be transferred to the state transportation officials, who will then be responsible for inspections, repairs, and ongoing maintenance, said Sullivan. Storrow Drive and Soldiers Field Road, however, will remain under DCR purview because the roads are so close to and “play an integral part’’ in the surrounding parkland, he said.

Both roads are part of State Police daily patrol routes, David Procopio, spokesman, wrote in an e-mail. Troopers “regularly patrol Storrow and Soldiers Field in marked cruisers to deter speeders, and we also use semimarked and unmarked cruisers to assist in seeking and pulling over speeders. I would further note that some characteristics of those roads . . . requires troopers to be mindful of public safety when conducting traffic stops,’’ said Procopio.

“We obviously need to be careful where we pull a car over, because we wouldn’t want to be stopped in a travel lane around a bend in the road, in a spot where we could not be seen by oncoming traffic.’’

Without an extensive review of citation data, it’s difficult to say whether the perception that speeders rule these roads is accurate, said Procopio. “In a broader sense, speeding enforcement has always been an integral part of the mission of the State Police, and we take great efforts to find and stop people who drive at excessive speeds.’’