In Dorchester, an oasis of health 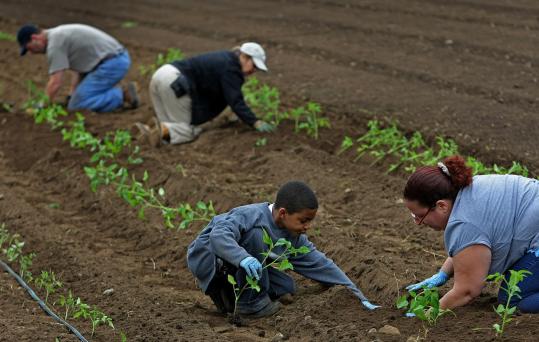 Codman Square has a , a KFC, and a bunch of corner stores stocked with sweets, juices, and prepackaged goods.

But there is not one supermarket.

So when residents in this low-income community learned that a farmers market was returning to the Dorchester square later this month for a second summer, they jumped at the chance to get crisp carrots, plump oranges, and fresh collared greens.

More than 40 people, up from just 17 last year, prepaid $550 for the 19 weeks the farmers market will be in the neighborhood. That means they can hike to the square, pick up their premade bags of goods, and head home to cook.

"For so long living in Codman Square, you take what's there," said Nebulla Setphen, a 27-year-old who lives near the square. "Now I have a choice in the matter. . . . For me, it's been more empowering than anything."

From Mattapan to East Boston residents are pushing back against the culture of unhealthy eating in low-income neighborhoods, known as food deserts because of the lack of places to buy quality foods.

"If you define a food desert . . . then Mattapan fits that definition," said Vivien Morris, coordinator of the Boston Food and Fitness Coalition, which has been trying to raise awareness about healthy food choices in Mattapan. "In talking to community residents about the food in Mattapan, people feel the quality was lacking and the variety was not all that people wanted. We were hoping to find a way to make healthy food more accessible and to help build support for local agriculture."

In after-school programs, at health centers, and even on the streets, there is renewed focus on eating right.

In the past five years, city officials say, 11 farmers markets have sprouted up across the city, including in low-income areas such as Roxbury, Mission Hill, Mattapan, and parts of Dorchester. Visits to the markets have also been on the rise, officials add.

To accommodate low-income neighborhood residents, many of the farmers now take food stamps, as well as senior vouchers and vouchers from the Women, Infants and Children program, thanks to the city's donation of electronic bank transfer machines that allow shoppers to swipe their food stamp debit cards at the market.

Judith Kurland, chief of staff to Mayor Thomas M. Menino, said the mayor has long pressed for healthy alternatives and has pushed to have more supermarkets and smaller grocers move into the neighborhoods.

While the number of supermarkets has increased, communities like Mattapan and East Boston still languish with only one supermarket.

Kurland said healthy food costs more, few grocers in low-income neighborhoods are willing to stock them, and too few people can buy them.

"It's still a struggle," she said.

The city has been lending its support to local organizations that promote healthy eating, by doing things like helping teens plant and grow their own food and holding cooking classes in Vietnamese and Spanish. Officials have also held community dinners that teach residents how to make a meal out of donated goods from local food banks.

In Mattapan, teenagers in the Teen Health Movement toted video cameras and trekked up and down Blue Hill Avenue last year to document where to get a healthy meal under $5.

Karla Walker, the project director for the teen program, said the effort has been three years in the making. Now, in addition to good food, the teenagers are also addressing poverty and disease issues that are linked to unhealthy eating behavior.

"We want to get more restaurants to serve healthier food and to address obesity and diabetes in our community," Walker said.

In Codman Square, organizers are pleased with the progress they have made to change their barren food landscape.

"The most exciting thing is we are creating a healthy alternative in our community that does not exist here," said Cynthia Loesch, diirector of community organizing for FAMILY Inc., which is bringing the farmers market to the square June 25.

"Not only do we deserve healthy food, but the community demands it," she said. "Residents want local, fresh organic foods here."