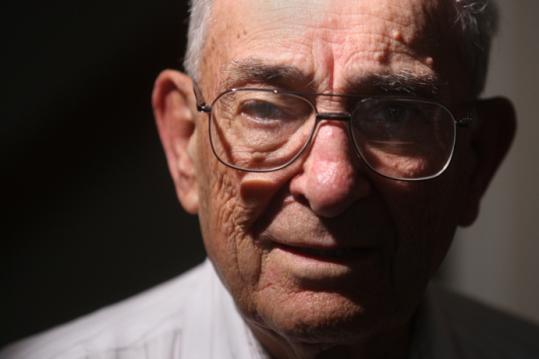 Tom Ruggiero of Plymouth is one of 32 D-Day veterans to be honored in Paris for the 65th anniversary this week. (Bill Greene/ Globe Staff)
By David Abel Globe Staff / June 4, 2009
Text size – +

About 800 yards from Omaha Beach on D-day, with shells flying between US ships and the German soldiers dug in on the coast, Antonio "Tom" Ruggiero's landing craft overturned in the turbulent water, drowning five men. The 23-year-old rifleman from Plymouth spent more than two hours stranded in the 42-degree water before a Navy gunboat plucked him from the sea. Only 11 of the 22 men on his boat survived.

A day later, on June 7, 1944, Robert Forcier followed in the path blazed by Ruggerio and other Allied forces. He landed on Omaha Beach, which remained a fire zone, and made his way through a hell of scattered corpses and the remains of destroyed armor. The 19-year-old from Fall River, a rifleman and interpreter, spent the next 17 days in firefights with Nazis before suffering shrapnel wounds and multiple internal injuries.

This week, Ruggiero and Forcier will be honored for their sacrifices to liberate France from the Germans. The aging veterans - among the dwindling number of survivors of the largest amphibious invasion of all time - will travel to Paris and be awarded the Legion of Honor, France's highest decoration, as part of the commemorations of the 65th anniversary of the D-day landings.

"I still can't believe it. I'm overwhelmed and very grateful for it," said Forcier, now 84. "To me, this is one of the greatest honors. To accept anything like this, while almost kicking the bucket twice while I was over there, it really means something to me, especially at my young age."

France anointed its first American into the National Order of the Legion of Honor in 1853, and since then, about 10,000 Americans have received the medal, including World War II Generals Dwight Eisenhower, Douglas MacArthur, and George Patton, according to the French Consulate in Boston. Since 2004, with the number of World War II veterans evaporating, France has increased the number of medals awarded to their liberators, providing some 400 US World War II veterans with the honor.

Ruggiero and Forcier are being flown by France today from Boston to Paris. Tomorrow, with some 30 other US World War II veterans, they will become knights in the Legion of Honor in the courtyard of Les Invalides, which houses the tomb of Napoléon Bonaparte, the diminutive military leader who created the Legion of Honor in 1802. On Saturday, honorees will board a special train to Normandy, where they will join President Obama and President Nicolas Sarkozy of France in a ceremony at Normandy American Cemetery and Memorial in Colleville-sur-Mer.

For both men, it has been a long journey back to the beaches of Normandy.

Ruggiero was drafted into the Army in 1942 at age 22 after he began a career as a tap dancer in Hollywood and New York. As a sergeant in the Second Ranger Battalion, he was in the first wave of Rangers to head for Omaha Beach on the morning of June 6, with the objective of taking Pointe du Hoc and disabling its German artillery.

After Ruggiero's landing craft sank and he was saved, he rejoined the fight within a few days, fought in some of the war's bloodiest battles, and ultimately made it across the continent to what is now the Czech Republic. He eventually earned two Bronze Stars, two Purple Hearts - the result of being wounded twice - and the nickname "Rugged Ruggie."

After the war, Ruggiero returned to Plymouth, married, had a daughter, and joined the local fire department, where he spent 29 years and rose to the rank of captain. He retired in 1976.

Forcier, whose family had moved to Fall River from Montreal, grew up in the city's French-speaking community and was drafted into the Army in 1943 at age 18. He described his passage across Omaha Beach this way: "It was hell."

His job was to cut off German supplies headed to Cherbourg, and then he was sent to Sainte Mère Eglise, where his company in the Army's Ninth Infantry Division fought continuous battles. Later, he took part in the Battle of Caen, one of the most brutal of the Normandy campaign. "There was more bloodshed there, and there were no winners," he said. "We took an awful loss, and the Germans, the same. You just asked yourself: 'Why did it have to be this way? Why did both sides have to lose so many men?' "

On June 24, while eating rations, he was severely wounded during an ambush by German soldiers. "Out of nowhere, all hell broke lose," he said. "The only thing you could hear was the whistling of the shells. It was very tough on us. That's where they caught up with me."

He was treated for internal injuries in France and England and returned to the United States in November 1944. He received a Purple Heart for his wounds.

After the war, Forcier got married, raised three daughters, and spent decades working as a manufacturing manager of sonar gear at . He retired in 1989.

On Friday, he will join his father, who fought in France during World War I, as a member of the Legion of Honor.

It will be Forcier's third trip back to France and Ruggiero's second since the war.