Fight to save horse units reveals a social divide 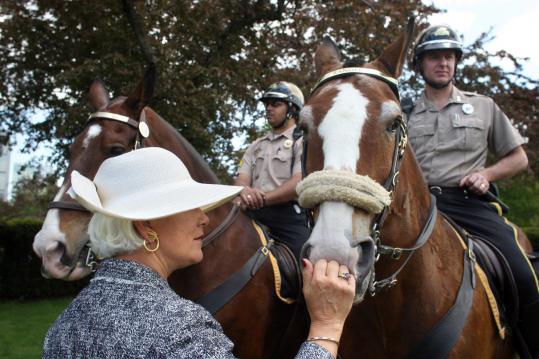 With their steady gaits and sleepy demeanor, the horses that clip and clop along the paths of the Public Garden, Boston Common, and other city parks would seem unlikely subjects of another debate over social class in Boston.

But a fight to save the city's horses from budget cuts has revealed a genuine divide. Well-to-do, mostly anonymous residents have emerged as patrons of the eight horses ridden by park rangers, pledging more than $200,000 in private funds to keep them from being disbanded and put up for adoption.

"They've been a longtime symbol in Boston," said Henry Lee, president of the Friends of the Public Garden, which has joined the effort to save the Park Ranger horses. "They would be very unfortunate to lose and very difficult to reestablish."

The 12 horses of the Police Department's mounted unit have drawn the attention of 2,000 people who signed an on-line petition. But have attracted no meaningful financial support, to the dismay of City Council members who are considering ways of restoring funding.

The disparity paints a glaring picture of how the whims of the wealthy can impact public services. The duties of the eight park rangers on horseback include posing for photographs, giving tourists directions, and enforcing park rules. The police horses, which need $600,000 to avoid the budget axe, have a much wider range of duties. They bear full police officers with authority to arrest drug dealers and muggers hiding in the bushes of the Back Bay Fens, for instance, or to step in to control crowds during unruly street celebrations of sports victories.

Members of the City Council have floated ways to keep the police horses, including a proposal to charge professional sports teams for their championship marches. But so far no solution has been found. Simply consolidating the units appears to be off the table, complicated by union issues (parks and police employees are in separate unions) and leases for separate stables.

An adviser to the residents who are supporting the park ranger horses described the fund-raising campaign only on condition of anonymity, because neither she nor the equine benefactors want recognition for their generosity. The private individuals have been joined in their fund drive by the Emerald Necklace Conservancy, Friends of the Public Garden, and the Friends of Post Office Square.

The groups supporting the park rangers are not dismissive of the police horses, but they are bowing to fiscal realities, said one booster.

"We'll miss that too, frankly," said Julie Crockford, president of the Emerald Necklace Conservancy. Her organization supports the Arnold Arboretum, Back Bay Fens, and several other parks that often are patrolled by rangers. "The attempt to save it all would have just been a financial target that would have been hard to do on such short notice," she said.

The public appeal of the horses is strong, according to interviews with families strolling through the city's parks. From the moment Park Ranger Scott Peas saddled up 18-year-old Frederick at the ranger post on Boston Common on a recent afternoon, the pair was admired and photographed.

Sandy Kryder and her 3-year-old grandson Brooks Hawkins waited at the Common for more than an hour for the mounted patrol to show up Tuesday.

"We watched the cart being brought up by the truck clear from Charles Street, we ran up to see where it stopped, and watched him unload the horse and put the saddle on and the bridle on the horse," Kryder said. "It's a big highlight for him."

The park rangers mounted unit was established with help from the Police Department in 1982 to patrol the Arnold Arboretum. Over the years, the police and ranger units became more separate, with the rangers stabling their horses at Franklin Park and the Police Department accepting donated stable space at the Brandigee Estate in Brookline.

"It is much less about law enforcement and more about customer service," said city parks commissioner Antonia Pollack.

She said she the city had not received a donation yet from the parks supporters and was unsure whether it would allow the rangers mounted patrol to continue. "Who knows what's going to happen with the budget?" she said.

Mayor Thomas M. Menino defended the decision to disband the unit as a tough but necessary one given budget constraints. He said he was not sure whether the amount that has been raised would be enough to keep the ranger mounted patrol on the beat.

"The mounted patrol in the parks has always been a favorite of the community, and we'd like to maintain them as best we can, but we've got a budget issue," Menino said in an interview. "It's easy to say I'm for them all, but as mayor you've got to make decisions."

The Police Department's mounted patrol is more expensive because it employs 10 civilian horse handlers, who are to be laid off with the elimination of the division. Park rangers take time away from their duties to work in the horse stables, clocking overtime beyond the budget of less than $100,000 a year, Pollack said. She did not have an estimate of the overtime costs.

The city should consider consolidating the two units, said a fiscal watchdog.

"It would seem, in terms of housing and taking care of the horses, it would make sense if there was room to just have one operation," said Samuel R. Tyler, president of the business-funded Boston Municipal Research Bureau. "That is one of the issues these cuts raise, which is whether it is more cost effective, from a lot of different ways, to have one operation."

But the police and park rangers being in separate unions makes it difficult to merge the two, city officials said.

Pollack said she appreciates the donors' generosity, but that she wishes it was directed toward hiring more rangers. The number of rangers has been cut from 13 to 12 in the last year, and there is no longer a budget for seasonal rangers, which added six more to the rangers' force in the spring and summer of last year.

"We all love the horses, and they're a wonderful tool that helps the rangers," Pollack said, "but you need a critical mass of rangers to cover the 1,100 acres in the Emerald Necklace, the historic cemeteries, Millennium Park and Post Office Square."