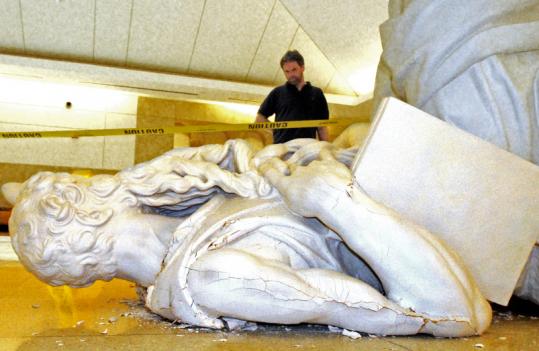 Police charged a Tyngsborough man with toppling a 148-year-old copy of Michelangelo's Moses in a fit of rage over an unpaid parking ticket. The statue had recently undergone $20,000 in renovations.
By Megan Woolhouse Globe Staff / April 4, 2009
Text size – +

It was a different kind of road rage.

Brendan Pemberton, 42, of Tyngsborough, had just learned he owed $165 for a 20-year-old speeding ticket that resulted in his license getting suspended. So he took out his frustrations on a towering statue of Moses in Worcester District Court on Thursday, police said, knocking the 148-year-old sculpture off its pedestal and sending it crashing to the floor.

State Trooper James B. Ellis, who was standing 15 feet from the statue and dressed in full uniform at the time, said Pemberton walked over to the 8-foot sculpture and angrily shoved it a couple of times.

"He was in a rage and really lost control," Ellis said. "It went right over."

Pemberton now faces much bigger problems than a speeding ticket and a suspended license.

He was charged with malicious destruction of property, disturbing the peace, and being a disorderly person. At his arraignment yesterday, a judge ordered Pemberton held on $10,000 bail and sent to Worcester State Hospital for a competency evaluation. He could not be reached yesterday.

The statue had recently undergone $20,000 in renovations, according to court officials, in preparation for its new home in the city's new $180 million justice center downtown. For decades, the Moses statue, a replica of the Michelangelo sculpture that sits in a Roman basilica, was a fixture in the city's old Main Street courthouse, where it sat in an unobtrusive alcove in the courthouse lobby. In dire need of a cleaning and overall restoration, the Worcester Law Library paid to have the work done and had it reinstalled in the new courthouse just a few weeks ago.

Yesterday lawyers said the statue has always marked a meeting spot, with lawyers telling colleagues or clients to meet "at Moses."

Edward W. McIntyre, Massachusetts Bar Association president, said he has worked in the Worcester courts since 1981 and "grew up with Moses."

The crash happened shortly after noon.

Steven Power, a Worcester lawyer, said he was in the clerk's office when Pemberton was told by the clerk that she could do nothing about his old speeding ticket. Mary Carpenter, the office manager at the clerk's office, said yesterday that the ticket was from a speeding infraction in 1989, when Pemberton had been ticketed for driving at 75 miles per hour on the Mass Pike at a time when the speed limit was 55 miles per hour. Power said the clerk told Pemberton he would need to resolve the ticket at the Registry of Motor Vehicles.

Pemberton did not take this news well.

"He pulled some of the paperwork out of her hand, and stormed out of the office," Power said. "The next thing I know some of the court officers are running out of the room."

The court sees its share of upset customers and, Power said, Pemberton just seemed like "another disgruntled person."

"I don't think anybody would have expected he would have done that," Power said.

Ellis said he and the others were stunned to see Pemberton cross the roped-off area around the statue and give Moses a couple of shoves at the waist.

When the statue fell, he said, it was "a little surreal."

Ellis said a thud-like sound reverberated through the large foyer of the courthouse as the statue fell on its back and cracked.

Ellis stood with Pemberton until Worcester police officers came and took him into custody.

It was unclear yesterday why Pemberton went to court to take care of the ticket after so long. The Telegram & Gazette reported yesterday that Pemberton had also allegedly threatened to throw acid on artwork at the Worcester Art Museum as police arrested him.

The original speeding ticket was for $150, plus $15 in court costs and fees after 20 years, Carpenter said.

Speeding tickets are typically not subject to a statute of limitations because the driver is charged and notified at the time of the infraction, according to Robert A. George, a Boston lawyer.

"It's only when you are [not charged] that the statute of limitations applies," he said.

Yesterday, courthouse staff mourned the toppled sculpture. Carpenter and others said they were surprised to see that the statue was hollow on the inside. Carpenter, who has worked in the city's courts for 30 years, said she had thought that it was made of marble or granite because it looked extremely heavy.

Seeing Moses in pieces on the ground and covered with a sheet made her feel like there had been a death in the workplace.

"They haven't lifted him," she said, heaving a deep sigh. "I suppose anything's fixable. I just don't know if anybody has the money to do it again."