Strengthening the safety net for autism in adulthood 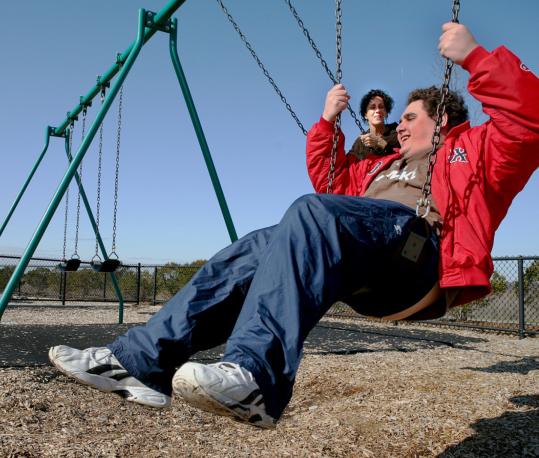 It is a lament that would ring familiar to many a parent: I don't want my child to leave home.

But this parent, Marie Duggan, was not talking about a child trundling away to college or shipping off to war. Her autistic son, Michael, had scarcely crested adolescence when his Roslindale family confronted the prospect of him moving to a house, miles away, with other teens.

"The mayor said, 'Why, why would they do that?' " Duggan recalled. "And I said, 'Because Boston doesn't have an appropriate program for adolescents with autism.' "

That was four years ago, and now the city provides such services in West Roxbury. And the mayor, moved by the plight of Duggan and other families with autistic children, is convening a summit Friday of more than 100 parents, social service agencies, and specialists to strengthen the safety net for autistic children and ease their journey into adulthood.

It is a reflection of battles both personal and societal as the ranks of autistic children in Boston's schools swell, an increase driven by earlier diagnosis, expanded services, and the dimming of stigma that once kept families in the shadows.

"My hope, really, is that we're able to reach out to people like this woman," Menino said this week, sitting elbow to elbow with Duggan in a City Hall conference room. "You start looking at this issue, and you start finding more people you know affected by it.

"It's a lonely fight for a lot of people."

This school year, nearly 500 students from ages 3 to 22 attending public and private schools in Boston are diagnosed with autism. A decade ago, there were fewer than 100.

In recent years, few medical conditions of childhood have stoked deeper concern - and ignited greater controversy - than autism, which produces a wide spectrum of symptoms that can compromise learning and impair social interaction. A US study two years ago estimated that one of every 150 US children has the condition, a substantial increase from previous reports.

The reasons for that rise are as complex as the disability itself.

"Children with much, much milder symptoms who 30 years ago would not have been identified as having autism are included on the milder end of the spectrum now that we use the term 'autism spectrum,' " said Dr. Elizabeth B. Caronna, who directs a clinic for autistic children at Boston Medical Center.

In other cases, children who wore a different diagnostic label in years past - mental retardation, for example - are now regarded as autistic. But some specialists believe part of the increase is probably attributable to an actual rise in symptoms and not to reclassification.

Researchers have shown there is a genetic predisposition to autism and, maybe, some environmental factor acts like a match lighting a genetic fuse, said Dr. Leonard Rappaport, chief of developmental medicine at Children's Hospital Boston.

"There is a great need," Rappaport said. "Hopefully, if we can work on doing things for children and young adults with autism, we'll automatically become better at doing the same thing for children with other disabilities."

For the parents of autistic children, part of their frustration stems from a disjointed patchwork of services. The state Department of Public Health provides care for every autistic child from birth to age 3.

But then the responsibility shifts to school districts, leaving services subject to the vagaries of local funding and varying philosophies about how to treat autistic students.

"When the children are very, very young, there are more opportunities," said Carolyn Riley, senior director of special education for the Boston public schools.

"But for middle school students and adolescents, there are fewer opportunities," she said.

And that is even truer as autistic students enter adulthood. After the age of 22, no single agency takes charge of their care.

So, for parents, "there's the sense that, 'Oh my God. My kid has graduated, and I'm not going to have an empty nest. I'm going to have a very full nest,' " said Deborah Allen, director of the Bureau of Child, Adolescent, and Family Health at the Boston Public Health Commission.

Michael Duggan is 18 now. He has been to a prom and has a job at a community center.

He attends summer camp. But when he goes to camp, his mother has to be with him because otherwise, Marie Duggan said, no camp would accept her son.

She wants the people attending the summit, an invitation- only event, to hear stories like that. And she wants them to know this, too. "You'll do anything for your kids," Duggan said.