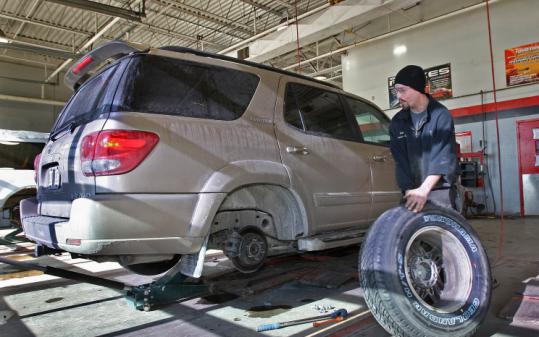 Massachusetts has ordered a tire chain to charge Bay State residents a 5 percent sales tax on their purchases in New Hampshire in an unprecedented move that could have huge implications for consumers and other merchants.

Town Fair Tire Centers, which is based in Connecticut but has six shops in New Hampshire and 25 in Massachusetts, is fighting back with a lawsuit now before the Massachusetts Supreme Judicial Court that accuses the state of violating the US commerce clause. If Massachusetts prevails in the case, which is likely to be heard next month, it could drive up costs for consumers and retailers such as and Sears that sell expensive home appliances and other goods in New Hampshire, which doesn't have a state sales tax. It also could mean millions of dollars in new tax revenue for the Commonwealth as it faces a $1.1 billion budget deficit, according to tax analysts.

"This is a first-of-its-kind case," said Fred Nicely, general counsel of the Council on State Taxation, a nonprofit trade association of multistate corporations engaged in interstate and international business. "There's huge ramifications to the entire retail community."

To others, it's a case of "Taxachusetts" striking back at the "Live Free or Die" pride of New Hampshire. The Granite State has long lured Massachusetts residents over the border to enjoy tax-free shopping. New Hampshire Governor John Lynch has even gotten involved, kicking off a campaign one year to persuade Bay Staters to head north so they don't have to cram all of their shopping in when the Commonwealth decides to hold a three-day "sales tax holiday."

"People are free to buy their tires wherever they want at the best price," said Erin Willet of Lunenburg, who routinely drives 20 miles to Nashua, N.H., to avoid tax on household items and big ticket purchases like appliances. "If Massachusetts doesn't like it, then they should have predictable tax-free holidays so that people can plan their shopping to take advantage of it."

The Town Fair Tire legal battle dates back to 2003, when the Massachusetts Department of Revenue audited the three New Hampshire stores Town Fair Tire operated at the time, after receiving evidence that Bay State residents were driving up to buy tires and having them installed at the chain's shops. The auditors identified 313 sales made to Massachusetts consumers, based on invoices that included Commonwealth addresses and in some cases telephone numbers. The state's tax authorities say the records demonstrate that Town Fair Tire knew the customer intended to use the goods in the Commonwealth, and therefore should have charged a 5 percent "use tax" - essentially a sales tax for items purchased for use or storage in the Bay State. Those taxes then would be given to Massachusetts. Following the audit, Massachusetts authorities assessed the company about $108,947 in tax, penalties, and interest related to the sales.

Kevin W. Brown, general counsel of the Massachusetts Department of Revenue, said the case attempts to address a difficult and protracted problem. Currently, New Hampshire merchants who also have shops in Massachusetts are required to collect taxes on items that are bought by Bay State residents over the Internet and via catalogs and mailed to their homes.

In the 1990s, a similar lawsuit involving Circuit City determined that the Commonwealth could require the electronics chain to charge taxes on merchandise ordered in Massachusetts but picked up in the Granite State. But there have been no court cases in Massachusetts involving purchases made entirely out of state.

Until now, consumers have been solely responsible for paying use taxes for eligible purchases initiated and completed in New Hampshire when filing their state tax returns. This isn't an issue in other border states, like Connecticut and Rhode Island, because they charge sales tax and there is less incentive for Bay State consumers to cross the border.

But many Massachusetts residents don't file use taxes, tax authorities say, and individual violators are nearly impossible to detect. The invoices and receipts kept by retailers, however, have made it possible for the state to track down the customers' plans to use their merchandise in the Commonwealth, according to Brown.

"The use tax is designed to take away an incentive for the buyer to go out of state and not pay the taxes," Brown said. "That's why we need to be enforcing the use tax because it protects local vendors." Brown said he did not have figures for how much Massachusetts loses in sales taxes because of purchases made in New Hampshire. But several economists estimate losses to be anywhere from $130 million to $410 million annually.

Town Fair Tire, however, says it has no certain knowledge of where the tires will be used - Concord, N.H., or Concord, Mass. - and is under no obligation to ask customers where they plan to bring the merchandise after they leave the store.

Consumers buying tires aren't always the owners and operators of the car, nor is the address given necessarily linked to the vehicle, according to David Nagle, tax partner at Sullivan & Worcester LLP in Boston, which is representing Town Fair Tire. The company also says it could be held liable for incorrectly guessing where customers plan to use the tires and charging tax when it isn't warranted.

Town Fair Tire appealed the assessment to the Massachusetts Appellate Tax Board and lost last June. The merchant then brought its case to the appeals court, accusing the Commonwealth, among other allegations, of violating the commerce clause that gives Congress the right to regulate interstate trade. In December, the Supreme Judicial Court, on its own motion, took the case.

While Massachusetts tax authorities say the Town Fair Tire case has narrow application, Brown said it could conceivably be applied to other merchandise installed on vehicles, such as ski racks or stereo systems.

If the state succeeds with the tire case, tax specialists say, the ruling could have implications for many New Hampshire merchants who collect customer information or offer financing. Furniture stores and electronics chains, for example, could conceivably be required to determine consumers' intended use for a leather chair, a big screen television, or the contents of their entire shopping cart.

"We're just outraged at this case," said Nancy Kyle, president of the Retail Merchants Association of New Hampshire. "New Hampshire prides itself on being sales-tax free. It's not a New Hampshire retailer's job to track where someone goes with their merchandise and then pay sales taxes to other states. What's to stop Maine or Vermont and Canada from doing the same?"