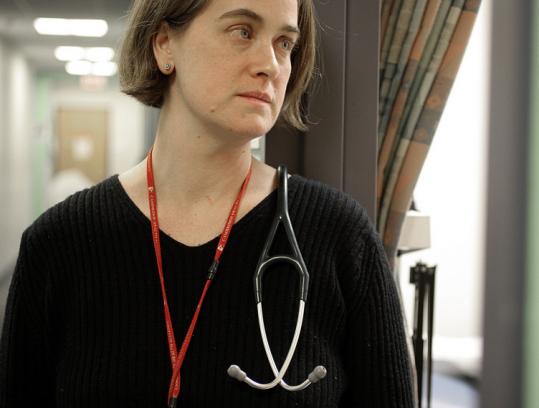 At Massachusetts General Hospital, patients whose blood pressure was in check just weeks ago now find it rocketing out of control. They blame the economy.

At Boston Medical Center, obese patients who had been shedding weight are packing on pounds again as they resort to cheaper, high-calorie food and abandon gym memberships. They blame the economy.

At a Framingham doctor's office, patients forgo screening tests such as colonoscopies because they don't want to spend scarce dollars on copayments. They blame the economy.

In hospital wards and medical clinics across Massachusetts, doctors see growing evidence that the ill economy is making patients sick, spawning headaches and churning stomachs, and even causing bouts of anxiety and depression among people who never before sought psychiatric help.

The chief of outpatient medicine at Boston Medical estimates that financial turmoil figures into at least half of all patient visits, and at one of the nation's premier psychiatric hospitals, McLean in Belmont, 31 percent more patients were admitted last month than in December 2007.

"I've been stunned by how pervasive the impact of the current economic downturn is on the health of my brood," said Dr. Stephen Hoffmann, whose medical practice in Framingham has nearly 3,000 patients.

The economic crisis is far too fresh for any government agency or professional organization to have quantified the health consequences. But during previous recessions, researchers linked spikes in unemployment in the United States and Europe to increases in deaths from heart disease, cancer, and psychiatric disorders.

In interviews this month with a dozen doctors, family physicians as well as specialists, nearly all said they had encountered patients suffering ailments tied to the financial collapse, with the damage wrought in sore arms, troubled minds, and neglected prescriptions.

At a Somerville clinic run by the Cambridge Health Alliance, the flagging economy, "touches us every day," said Dr. Laura Obbard. She sees it in the weary faces of her patients, such as Jorge Cardoza, a 52-year-old diabetic who lost his construction job in late October.

"That was like a knockout for me," Cardoza said.

While he was working, his blood sugar level, a key indicator of how well diabetics are faring, remained safely low. "Now," he said, "I see my sugar level is very high. That never happened before. That worries me a lot."

In part, that could be because he's not getting as much physical activity. His job was strenuous, and he used to exercise at a gym, until financial pressures forced him to cancel his membership. Research has shown that regular exercise can dramatically improve diabetes symptoms. And stress can make them worse.

During the past few months, Dr. Randall Zusman has noticed something disturbing in his practice at Mass. General, where he tends to adults with recalcitrant high blood pressure. About a dozen patients who had been doing well suddenly had elevated readings.

The patients insisted they were not skimping on their medication and attributed "the loss of blood pressure control to increased stress due to economic conditions," said Zusman, director of the hospital's hypertension section.

It might not be stress that's spawning blood pressure problems, he said. Instead, it's plausible that anxious patients are not eating as many fruits and vegetables, opting for saltier processed food that can raise blood pressure. Another possibility, Zusman said, is that stress-related headaches might be leading patients to take anti-inflammatory pills that increase water and salt retention, exacerbating their condition.

In her practice treating obese patients at Boston Medical, Dr. Caroline Apovian recently saw a woman who had been dutifully following advice to eat less and exercise more. She had joined a gym and moved to a safer neighborhood.

But then the economy tanked.

At hospitals and clinics that treat psychiatric disorders, requests for help surged markedly in recent months, with some patients indicating they had cut back on medication to save money.

At McLean, the recent increase in admissions followed an unusually slow stretch in October and November - just as financial woes were beginning to accelerate.

Dr. Joseph Gold, chief medical officer at McLean, said that as he and his staff counseled patients, a portrait of pent-up demand emerged.

Early in the crisis, "some people were feeling frozen or immobilized," Gold said.

They dreaded going to the emergency room, fearful they would be socked with a bill they couldn't pay. And if they were hospitalized, Gold said, they worried they might lose their job.

But as weeks passed, the economic deterioration deepened - and with it, patients' despair.

"Then what we saw in December and January was the volume in the psychiatric emergency rooms and in our hospital was actually much higher than we expected," Gold said, "which seems to confirm there was some element of people postponing their care until they could not defer it any longer."

For some people, the harsh economy has meant a retreat to harmful habits, said Dr. Steven Adelman.

"People tend to drink more when they're stressed out," said Adelman, director of behavioral health and addiction medicine at Harvard Vanguard Medical Associates, a group practice that treats about 30,000 patients for mental health conditions. "I'm seeing more people falling off the wagon who have been relatively sober for quite a while. The addiction business is booming."

Sometimes, the signs of suffering are subtle.

A few weeks back, a young woman showed up in the office of Dr. Raj Krishnamurthy, outpatient medical director at Boston Medical.

The woman, a student, complained of arm pain. The physician could sense a deeper ache.

It turned out that the patient had taken a nighttime cleaning job so that she could cover expenses.

As they talked, Krishnamurthy recalled, the woman kept massaging her arm.

"She just seemed a little more distressed than what I would expect from arm pain," the doctor said. "When I asked, she said she was just extremely stressed about taking on this job. She hasn't been sleeping, she hasn't been eating right, she hasn't been exercising. She's just been feeling lousy. And she broke down in tears."