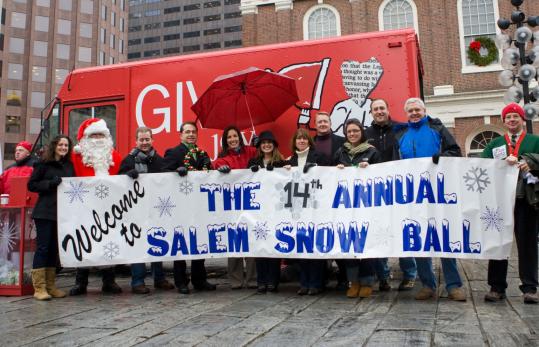 Even though the nation is in the middle of a critical recession, the Boston Globe Santa Fund announced today that a total of $1,301,857.63 was contributed during its just-concluded 2008 fund-raising campaign.

It is the fifth largest amount raised in the 52-year history of the fund, which provides Christmas gifts each year for thousands of needy children in 170 eastern Massachusetts cities and towns.

It is impossible, however, to determine exactly how many people contributed to the fund this season because the donations are not only made by individuals, but by varied groups of people, many of whom have been making contributions to the fund each year for a number of years. The Milano family, which owns the Union Oyster House, for example, has been a generous supporter from the very first year the Globe fund was launched and this year they contributed $5,000.

Globe Santa has always taken particular pleasure in the fact so many children are among the contributors each year. One such group are the students of the Boston public school system. This year, however, because of the bad weather and the holidays the schools were unable to complete their collections in time to meet the December 31 deadline for 2008 contributions. Later this month when the funds are presented to Globe Santa, the efforts of the school department personnel and the students will be acknowledged and the funds will be assigned to the 2009 fund.

An analysis of the 2008 financial report reflected a significant increase in the amount of funds contributed online. This year's total was $424,657.71, which was $83,339.42 more than received online last year. Globe Santa pointed out that one reason for this was the fact The Boston Globe's Boston.com website expanded its coverage of the campaign and at one point had a special home page banner featuring a drawing of Globe Santa.

A larger amount of $876,199.92 in the financial report breakdown was made up of donations not only received by mail, but also contributed at the various Globe Santa sleigh visits around Greater Boston in which a number of media, entertainment, sports, and political personalities participated.

One of the now traditional Santa events is the Salem Snow Ball and at the Dec. 17 sleigh stop a delegation of eleven people bearing a large Snow Ball banner suddenly came marching down the street to present Santa with a check for $9,500, the proceeds from this year's ball which has been organized for 14 years by the people at the William J. Lynch insurance company in Danvers.

The report also included specific data on the monies collected at the Citi Performing Arts Center's Wang Theatre during performances of "Dr. Suess' How The Grinch Stole Christmas! The Musical" as well as at the Improv Asylum, a popular comedy theater located in the North End.

At the Wang among the $9,593 placed in Santa collection boxes were six rolls of Susan B. Anthony quarters, 10 rolls of regular quarters, and five rolls of dimes. The total amount collected at the Improv over several weeks was $17,272.50, where the prime fund-raising event was a 24-hour Improv performance featuring local entertainers as well as media personalities.

The 2008 financial report also revealed the significant financial contributions made each year by the employees of the Globe.

In the Globe cafeteria, for instance, specially designed containers were again placed at the two check-out cash registers so that employees, if they wished, could drop change from their food purchases into the collection boxes. This Christmas the amount collected totaled $4,418.31.

Then there was the annual Globe employees crafts fair and raffle with the products involved being made or prepared by employees to be sold or raffled off. This year $3,242.07 was raised for the Santa Fund. There were also raffles and "spare coin" collections in various Globe departments including the Classified Inside Sales group, the Pressroom, the Production Department, and the Telesales personnel. The member of the Globe sports department, rather than hold their fun-filled annual exchange of personalized gifts, decided to take the money and contribute it to Santa.

It was the 22d consecutive year the Globe Santa campaign in total has raised in excess of $1,000,000.

All applications for assistance had to be submitted by the beginning of November. Each had to be certified by a social service or religious agency. Once the certification was confirmed by the Globe Santa staff, the gift box instructions were sent to the Globe facility at Millbury for packaging and then the boxes were turned over to the for delivery. The UPS task was made more difficult, however, because of the cold, snow, and ice.

Globe Santa, in expressing his sincere appreciation to thousands of people who might have contributed in any way to the success of this year's campaign, also pointed out that contributions to the 2009 Globe Santa Fund can be mailed any time during this year to: Globe Santa Fund Trust, c/o Citizens Bank, PO Box 845059, Boston, MA, 02284-5059.