Memorial may be headed for scrap yard 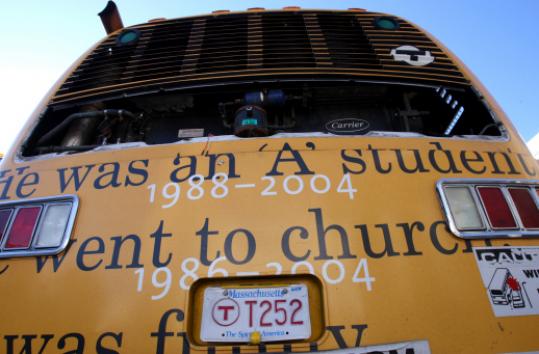 For more than a year, MBTA Bus 252 trundled through the streets of the city, like a mobile gravestone, honoring children gunned down in Boston over a quarter-century. Words from their friends and relatives were interspersed with the dates of their births and deaths on a background of school bus yellow.

When it was first unveiled in City Hall Plaza in 2006, some people wept. Mayor Thomas M. Menino delivered a speech on its significance, and victims' loved ones toured it, awestruck.

Now it sits in an Everett yard with dozens of other old, rusted-out MBTA buses. Most likely, it will be broken apart and sold for scrap. The yellow vinyl wrap will have to be stripped off and discarded.

"It's now ready for retirement," said Thomas Boyle, the chief materials officer at Everett Shops, the sprawling garage off Route 99 where 252 sits in a yard that could be described as a bus morgue.

The memorial, a public art project, was never meant to be permanent, but news that it was slated for destruction dismayed activists, relatives of homicide victims, and artists familiar with the project. Many said they would like to find a museum that would put it on display or to move it to a permanent spot on City Hall Plaza.

"I think it's horrible. I hate to think that anyone would scrap it, and I think someone should do something good with it," said Cindy Diggs, 43, of Dorchester, who lost two cousins and an uncle to violence and was at City Hall when the bus was first unveiled.

"It doesn't make sense for it not to exist anymore," she said.

At the very least, the bus deserves its own funeral, said Tina Chery, founder of the Louis D. Brown Peace Institute, which helped create the project.

"We should go out there and say goodbye," she said.

Bus 252 is 13 years old and its engine is worn down. All MBTA buses are usually put out to bid after 12 years of service, usually to scrap dealers who sell the metal, Boyle said. The bus will probably meet its fate at the beginning of next year, said MBTA spokesman Joseph Pesaturo.

Last week, it was wedged next to a 26-year-old bus covered in graffiti. A pile of rusty tire rims and the charred remains of a bus that had been destroyed by fire rested nearby.

The back panel of 252 had been stripped off, and the front sign had been pried open, revealing gnarled cables. But even in its desolate state, the bus still made an impression.

The project, known as "Remembering Boston's Children 1980-2005," was applied with temporary appliqués. Titan Worldwide, a New York company with a contract to sell advertising space on T property, agreed to donate the space on the bus.

The project was supposed to last about six months, said Thomas Starr, an associate professor of graphic design at Northeastern University who created the memorial with a $20,000 grant from the National Endowment for the Arts.

MBTA officials agreed that the bus would travel throughout the city and other towns inside Route 128, not just in Boston's more dangerous neighborhoods.

"It's easy to think of Boston as a safe city if you don't live in some of these neighborhoods where violence happens," Starr said. "The idea was to get the whole city to own the problem."

Starr said he was happy that the bus stayed out as long as it did.

"Unfortunately most graphic projects are ephemeral," he said. "It can only be temporary, but I hoped that even in its temporary state it would reach people the way a stone-carved, permanent statue could not."

Stephanie Manas, a 20-year-old public relations major at Boston University, said she remembered seeing it a couple of times on Commonwealth Avenue.

One time, she recalled, she stood on the sidewalk and read the quotes on the bus as it idled at a stoplight.

"It was very moving," she said as she headed toward her dorm near Kenmore Square. "Now no one else will get to see it. Maybe people will forget about the homicides that happened. Everything [the bus] tried to do will be undone."