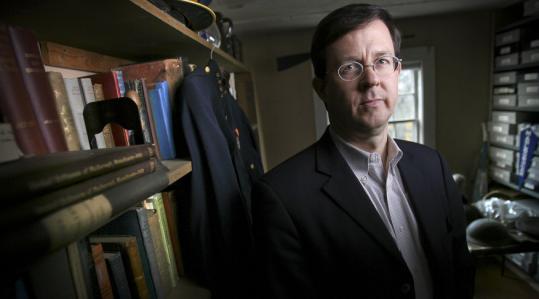 At 48 years old, Lee Wright is often the youngest person in a room full of local history buffs. That worries him.

So, as a trustee of the Marlborough Historical Society, he started talking to his counterparts in other towns across New England and discovered such societies share many of the same challenges, especially recruiting the next generation of enthusiasts and guardians.

What's at stake, Wright says, are the amazing antique treasures and priceless historical records that are the responsibility of the region's small, often volunteer-run societies, most with limited funds and aging volunteers. Wright started to wonder: Will future generations save history?

He believes the key to survival is to recruit younger volunteers, not just for their longevity, he said, but also for their technical proficiency.

"Younger individuals bring additional skills, such as the use of the Web, maybe computerized record keeping, and so forth, as well as new, fresh ideas that keep these historical items relevant," he said.

With these and other challenges in mind, Wright decided to contact the more than 1,000 historical societies in New England for a detailed survey on their problems and goals, with questions touching on membership, technology use, storage space, funding, and events.

The early results suggest that the historical societies routinely struggle with membership levels. With 92 completed surveys so far, Wright said, 57 percent reported finding it "somewhat difficult" or "very difficult" to find volunteers to serve on their board, and 81 percent cited increasing the number of active members as a "critical priority" or a "high priority."

With their love of looking backward, historical societies can be a little slow to look forward. But they are catching on.

"One of the big things right now is the electronic age, using things like YouTube, using things like blogs," said Robert Childs, a councilor of the all-volunteer Historical Society of Watertown, who is 61. "Using that, more than just papering the different businesses around town, is probably going to get us more of a draw."

He is clear on exactly why it's crucial to get people involved in preserving and promoting history. Without support from paying members and volunteers who give time, it would have been impossible to save Watertown's Edmund Fowle House, which few people have heard of despite its significance, he said.

"The beginnings of our government in this country started right there in that house," explained Childs.

The Edmund Fowle House doesn't have anywhere near the fame of Concord's Old North Bridge or the Lexington Battle Green - sites where the War of Independence began. But it was the meeting place of the Provincial Congress from April 1775 to November 1776, during the country's birth.

"This house was sitting there in terrible condition," said Childs. "If it wasn't for the determination of a very few people in this society, this house would have been lost, potentially."

The Watertown society's volunteers worked to get state funding and spent years restoring the house, which opened to the public in May. Still, the house museum is open only on the third Sunday of each month because that's all the group can do right now, he said. But there are YouTube videos of the house available anytime, said Childs.

He agrees with Wright. More and more, the society is turning to the next generation - in technology and in people.

"When we talk to the high school students, we say, 'Look, you got a computer club here, we need website help,' " said Childs. "That's the source that we're going to."

Historical societies are hungry for training on topics like podcasts and blogs, according to Kate Viens, executive director of the New England Museum Association, which included a Web 2.0 session at its annual conference, held two weeks ago in Rhode Island.

"Technology is finding its way into our conference and our programs because it is a topic that museum professionals and volunteers are actively working on," she said.

But there's a big divide - some historical societies are embracing the Internet and all of its promotional advantages embodied by the concept of Web 2.0, while something like 25 percent don't have direct Internet access, she said.

"The big benefit of Web 2.0 is it's a tool for engaging our audiences in a way they've never been engaged before, to give them a level of participation in our organizations that they've not had before," she said.

The Sudbury Historical Society website is a wealth of information and includes a store, with books on local history for sale alongside maps and historic photos. There's even a DVD tour of Sudbury barns set to music.

Lee Swanson, 70, is the curator and archivist for the Sudbury group, a position that pays a part-time stipend. He was called upon to give three of the presentations at the meeting that Wright organized earlier this month, including sessions on bringing history into the classroom and using software to manage collections.

Because there are so many challenges and so few resources, Wright's bringing together of historical societies helps fill a critical vacuum, said Swanson. It's the sort of outreach that at one time was done by the state, and the Bay State Historic League, which is now defunct, he said.

Wright said it was clear from the meeting that it is a time of transition for many historical societies. Some older members might not be so interested in multimedia or reaching out through the Web if they don't spend much time in front of a computer, he said.

But history is being dragged into the future.

Wright said technology can help make history accessible to a wider audience, as was the case this month with the society's "Salute to Marlborough Veterans" exhibition, organized to mark Veterans Day. Volunteers took a scrapbook filled with World War II service announcements about city residents, and scanned it on specialized equipment to create a large-scale reproduction that was viewed by about 500 visitors in one weekend.

What he saw among the groups taking part in his workshop was "this real desire, how to engage younger people in these activities," Wright said, and "looking for ways to use the Web and websites or a blog, certainly e-mail, and so on, to reach people who are perhaps younger and perhaps look to the Web first as a way to find information, as opposed to the more traditional ways historical societies have presented information."

Childs summed up the need to sell history to a wide audience using as many tools as possible.

"I love it, but I'm not going to live forever," the Watertown resident said. "You have to find other people like myself."