Bounty lies ahead in scallop fishery 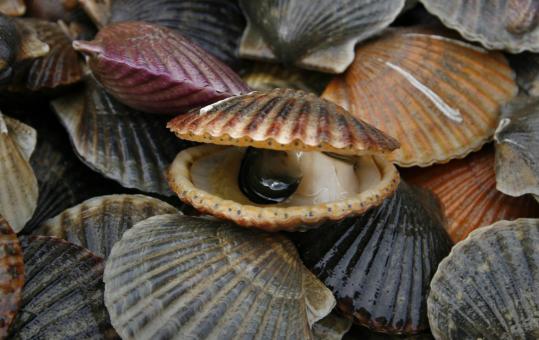 Young scallops or ''recruits'' take from two to five years to reach a legal harvest size like these caught off the waters of Duxbury. (JONATHAN WIGGS/GLOBE STAFF)
By Bina Venkataraman Globe Correspondent / November 14, 2008
Text size – +

Scallop fishermen on the East Coast can look forward to a big catch of the succulent shellfish a few years from now, a recent survey of sea scallops from Massachusetts to North Carolina suggests.

The survey, conducted by the National Oceanic and Atmospheric Administration's Northeast Fisheries Science Center in Woods Hole, found a spike in the number of young scallops or "recruits" that keep a fishery thriving. After six poor years for recruits, Georges Bank, a prime fishing ground stretching from Newfoundland to Cape Cod, had its highest number of the small scallops since 2000, and the mid-Atlantic region had nearly its highest population of them since 1979.

"Whenever we see an increase in recruitment, there's always good fishing for the years after that," said Deirdre Boelke, scallop plan coordinator for the New England Fishery Management Council, which uses the annual survey to manage the fishery. The young scallops take from two to five years to reach a legal harvest size.

The researchers estimate that a billion young scallops live near Georges Bank and surrounding areas, and more than a billion dwell in the mid-Atlantic from off the coast of southern Rhode Island to Virginia. In 2000, an estimated 1.85 billion scallop recruits lived around Georges Bank.

By 2004, many of those young scallops had grown to harvest size, and that year Atlantic sea scallop landings reached a record 65 million pounds of meat. The average weight from 2003-05 was triple the average from 1996-98.

"It's a very positive sign for the industry as a whole," Peter Anthony, manager of Future Fisheries, a scallop vessel fleet that operates out of New Bedford, said of the survey. "And a lot of it is due to the regulations we've been fishing under."

Those rules close off certain fishing grounds for two or three years at a time to allow scallop populations to regenerate. There was a significant increase in recruits in a closed area off Delaware and Maryland.

In Georges Bank, the reason for the rise in young scallops is not so clear. The Great South Channel, with its gravel bottom ideal for young scallops looking for something to latch onto, had a boom in scallop recruits even though it has not been closed off to fishing.

"At Georges Bank, there seems to be some sort of cyclical trend to this," said Dvora Hart, the chief researcher for scallop stock assessment at the fisheries science center, who led the survey. "We tend to see good years roughly every 10 years."

Fishery managers do not expect the predicted increase in landings to decrease the price of scallops. During the last boom, increased international demand kept prices high, Boelke said.

A separate survey this year by UMass Dartmouth's School of Marine Science and Technology confirmed that the number of young sea scallops had increased since 2007. But the study also found fewer large, older sea scallops in certain areas; since last year, Georges Bank lost about 78 million pounds of scallops that could have been harvested by fisherman. The cause of the die-off, said the school's Kevin Stokesbury, was probably old age. He said the results point to the danger of closing off a fishing area for too long. Parts of Georges Bank have been closed to all fishing since 1994 to restore groundfish stocks.

The NOAA study did not find high mortality in the older scallops. The federal study was done by dredging for scallop samples and by taking digital images of the seafloor, while the UMass Dartmouth study used only digital images and video.

Bina Venkataraman can be reached at bvenkataraman@globe.com.