In an era of disrespect, Gore butler stood tall 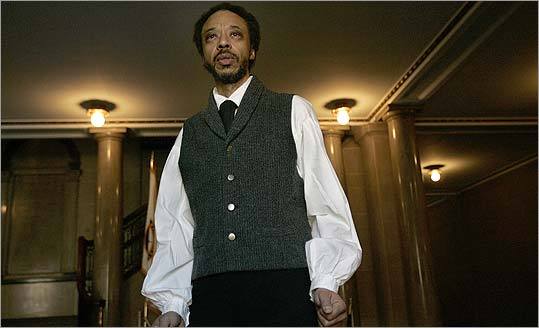 Waltham's Gore Place was built in 1806 as a grand country retreat for a leading Massachusetts politician of the day, Christopher Gore, who would be elected governor a few years later. But Gore was far from the only influential person to reside there. Robert Roberts, an African-American who served as Gore's head butler, was prominent in the Boston area's abolitionist community and in the field of a different kind of public service.

Roberts may have been a servant, but he was in no way servile. He emphasized the inherent dignity of work, as well as of the person performing it. He produced a widely read book meant to professionalize the work done by domestic servants, or, as Roberts described them, those who were "entering into gentlemen's service." He spoke out loudly against slavery and discrimination.

In an era where few careers were open to literate black men, Roberts took ad vantage of the chance to prove his ambition, refinement, and work ethic. In an age when most black people were invisible and disposable, Roberts, as head butler, could prove that he was indispensable. Obedience to the employer was required not because the servant was inferior, he believed, but because obedience in working life would enable financial independence in the servant's personal life.

"Being a servant is a great opportunity to be resourceful, and efficient, and reliable," said Guy Peartree, an actor who portrays Roberts in educational performances, explaining his subject's philosophy. "The book that he wrote really raised that sense of devoted connection to the work that he did."

Roberts worked at Gore Place for just two years - from 1824 to 1826, until just before Gore's death. But those two years had an immense effect on his legacy. It was during this time that he wrote "The House Servant's Directory," one of the first books by an African-American to be published by a commercial press. It was considered essential reading for anyone working as or employing a professional servant for the next two decades, and went through three editions. The book includes everything from advice on behavior toward fellow servants to instructions on how to tell fresh eggs from stale ones, and from recipes for silver polish to directions for carving a haunch of mutton.

Today, museums all over the country use it as a reference for displays of Federal period rooms and place settings, said Susan Katz, Gore Place's director of education. Katz added that Gore Place still makes lemonade for functions according to the recipe set down by Roberts.

A room in the mansion is arranged as it might have looked when Roberts was there. Befitting his status as head servant, his accommodations would have been simple but comfortable: a bed, a writing desk, bookcase, clothes bureau and closet, and heating stove. A small table in his room at Gore Place displays an abolitionist newspaper, and nearby is a chair with a washbasin, sponge, and bottle of rum - in keeping with his advice in "The House Servant's Directory" to wash one's feet three times a week with a solution of water and rum, especially during the summer.

Historians don't know what kind of formal education Roberts might have had, if any. But it's clear that he was a literate and cultured man - he would never have had success as a head butler otherwise. Before the Gores, Roberts worked for a Boston financier and industrialist, Nathan Appleton.

Much of the man's early life is a mystery. According to Colgate University history professor Graham Russell Hodges, who wrote the introduction for Gore Place's reprint of Roberts's book, he was born about 1780 in Charleston, S.C. It's unknown whether he was born free or a slave. He had moved to New England by 1805, marrying the daughter of Jude Hall, a prominent black Revolutionary War veteran in Exeter, N.H. Whether or not Roberts was born in slavery, he became profoundly affected by the anguish it caused when Hall's three sons - all freemen - were kidnapped and sold into slavery in the South. Despite the efforts of Roberts and the Hall family, they were never heard from again.

After moving to Boston, Roberts became a well-known figure in the burgeoning antislavery movement and in the African-American community that sprung up around Beacon Hill. He was also a member of the Prince Hall Masons of Boston, which obtained a charter from Masonic authorities in England when local members refused to recognize an all-black lodge. This might have led to his eventual employment by Gore, who was a Mason himself.

Some supporters of the abolitionist movement believed that black people should not remain in the United States, they should be sent to Africa, even if they were born and raised here. Some raised money to send hundreds of New England free blacks to what is now Liberia and Sierra Leone. Roberts felt strongly that sending black Americans to colonies across the Atlantic was not a solution to the evils of slavery and discrimination.

"O ye schemers! why do ye undertake to impose on the free people of color by telling them that Africa is their native soil, when our fathers fought for liberty, and received nothing for it, and laid their bones here? We claim this as our native soil, and not Africa; for we are sensible that if the land flowed with milk and honey, you would not send a colored person to it; for it is evident some of you would go to the uttermost parts of the world for one dollar's gain: therefore we know that it is not through pure love you want to send us to Africa."

Roberts figures prominently in a curriculum guide on the Federal period in the United States that Gore Place is developing for teachers. One suggested activity asks students to compare passages from his writings with the Rev. Martin Luther King Jr.'s "I have a dream" speech. Both appeal to their audiences to base their judgments on character, not skin color, and emphasize the inherent dignity of human beings. And with a century between them, both complain of injustices wrought by discrimination and racism.

"You hope that when teachers do the exercises with these kids, they see how tragically slow things were," said Katz. "I think it's one of the most powerful things in the whole packet."

Stephanie V. Siek can be reached via e-mail at ssiek@globe.com