THIS STORY HAS BEEN FORMATTED FOR EASY PRINTING
Jamaica Plain

In quest to cut waste, a modest proposal: Bring a mug 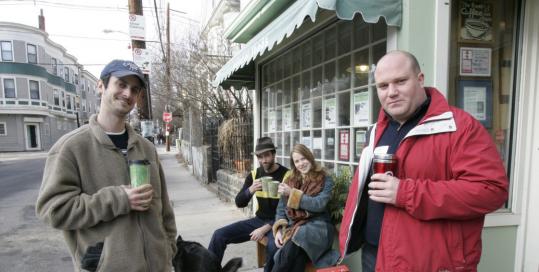 Jamaica Plain residents Joseph Porcelli and Dan Goldsbury are on a mission to reduce waste - one paper cup at a time.

The spark came when Porcelli noticed two friends drinking coffee at a neighborhood grocery store - City Feed and Supply in Jamaica Plain - out of mugs they had brought from home. Why not get the whole community to do the same? Porcelli thought. He teamed up with Goldsbury, a like-minded neighbor, and together they launched the Mug Project, with the simple goal of encouraging people to use mugs, not disposable cups.

Residents of the same JP apartment building, both men had been bothered by the trash created by paper and styrofoam cups. "One week at work, I just noticed that I had four to five cups stacked on top of each other. I said 'Oh my God, that's a lot of waste,' " said Porcelli, a program coordinator for the Boston Police Department.

For Goldsbury, a teacher at Citizen Schools, using a mug was a daily habit. When he moved to the Boston area, he looked for people who were holding mugs in the morning coffee line.

"Using my mug is always second nature, but working downtown and seeing how an urban community acts was contrary to the way I grew up," said Goldsbury, who grew up in Vermont. "There would be 20 to 30 people in line and I'd be the only one with a mug. I'd ask myself, 'Why is that?' They have mugs on the shelves, but people hardly give them a second look."

Porcelli and Goldsbury launched the Mug Project in November 2007 under the umbrella of Neighbors for Neighbors, a community group in Jamaica Plain that hosts social events and forms groups and projects to get neighbors involved.

The pair set up a website, mugproject.com, where people create profiles and start discussions on how they're incorporating mugs into their daily routines. They also created a YouTube video narrated by a roving mug who is shocked upon discovering another mug in bed with a stash of used disposable coffee cups.

"The ultimate goal is to have people examine their behavior as consumers, and to modify it," Porcelli said. He wants people "to do the things that they enjoy and to do it responsibly."

City Feed and Supply, where Porcelli grabs his morning cup, has become a gathering spot for the project. City Feed was already offering a 25-cent discount on coffee to customers who brought mugs, but the project has helped increase participation, said manager Jeff Morin. "Now that we've stepped it up and actively spread this, more people are bringing mugs," Morin said.

estimated that 14.4 billion paper cups were discarded by Americans in 2005 - and that doesn't include styrofoam.

Through the website and word of mouth, the Mug Project has attracted attention beyond Jamaica Plain.

People from around the country, including New York, Oregon, and Tennessee, have posted comments asking their friends and families to use mugs.

Porcelli and Goldsbury hope this grass-roots approach will spread their message nationwide, but for now, Porcelli sees Jamaica Plain as a fitting place to begin the project.

"I think everywhere is a good spot for this, but Jamaica Plain in particular because people are already sort of thinking on those lines. I think people move to Jamaica Plain because they want to live in a community that is diverse, that's vibrant, that's accepting and responsible," Porcelli said.

Outside of City Feed and Supply, Porcelli and Goldsbury encourage people to bring mugs everywhere they go - whether to their local coffee shop or to their office. Since June, Ula Cafe in Jamaica Plain has been offering 25 cents off speciality drinks to people who bring in a mug.

Porcelli and Goldsbury also plan to create a how-to guide about incorporating mugs at college campuses, churches, in the workplace, and at corporations such as Fidelity and Target.

And they hope to set up meetings with big coffee businesses like Dunkin' Donuts and , asking them to provide or boost cost incentives to people who bring their own mugs.

At Peet's coffee, Goldsbury discovered that he was only charged for a small cup of coffee when he used a mug, and at Starbucks, customers receive 10 cents off their purchase when they bring a mug. Porcelli and Goldsbury also plan to spread the word by creating mugs with the logo "Ask me about my mug," and will host a Super Bowl Mug Party on Feb. 3 at the Milky Way Lounge and Lanes, where people will drink from reusable containers.

"We've learned something that we can do every day that's very simple and part of our routine," Porcelli said. "It does make a difference."

Amy Farnsworth can be reached at afarnsworth@globe.com.