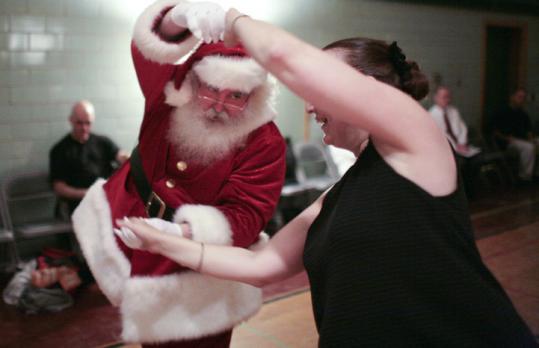 Santa Claus is coming to town. More accurately, he's from town - Cambridge that is.

Jonathan Meath is the perfect fit for a Santa. He is slightly overweight (he prefers the term "organic Santa"), has a red suit that his wife bought for him on , and as he got older and his beard got whiter, children started to call him Santa.

"In a way, Santa started to present himself to me," said Meath, 52. "It's really more that Santa called me, rather than me deciding to be Santa. There's a place in my heart that said, 'This is calling you.' "

Meath, who is pictured in his Santa gear on this month's cover of Boston magazine, has always had a knack with children, having spent 15 years in children's television producing shows for Nickelodeon and Discovery Kids.

"Children's television this day and age is very educational. It's very fun and entertaining and deliberately thought out to be age-appropriate to deliver to the needs of kids, which is one of the things that led me toward Santa," said Meath, who lives in Cambridge.

That and a good voice.

In addition to making a list and checking it twice, Meath has teamed up with a number of students from Berklee College of Music to create a Christmas album, "Santa JG Swings!" The album, released last month, contains some Christmas classics, such as "Santa Claus is Coming to Town," as well as tunes not holiday-specific, such as "Ac-Cent-Tchu-Ate the Positive."

"They're not traditional holiday songs, but they are very much in the spirit of what Santa is," Meath said. "Santa is bigger than the holiday, but all of it is done by the point of view of Santa."

In addition to entertainment, many of the songs offer lessons about empowerment. In the song "Yes We Can Can," Meath refers to women's rights: "Do respect the women of the world, remember we all have mothers. . . . Help each man be a better man with the kindness that you give."

Janie Barnett, a Berklee teacher who has known Meath since high school, said the album "seemed like just the perfect fit for him."

"The thing about Jonathan is that he really just genuinely loves Christmas," said Barnett, who sang on the album.

Still, it's not always easy being Santa Claus.

Meath, who is in his first year of being a full-time Santa, makes appearances around Massachusetts at places such as Swing City in Newton and Nordstrom in Natick, and travels to New Hampshire on weekdays to "sit in the big chair," as they call it in the business, to talk to and take pictures with children. Meath also puts on his Santa suit for events at private homes and corporate parties.

"You are Santa 365 days a year. It's not respectful to kids to not acknowledge Santa. They need Santa," Meath said. "It wasn't really a question of leaving my own job as it was to committing to the character. When you are Santa, you have a responsibility to the character, even when you're in your private life."

Even so, Santa still needs to pay the bills. Meath is still working with television, helping to produce a show on children's health. He also wants to develop a Cambridge holiday parade, something similar to the HONK!festival in Cambridge and Somerville.

Another thing that makes Meath a thoroughly modern Kris Kringle is his Internet savvy.

Calling himself "a true 21st-century" Santa, Meath is a regular on various websites targeting Santas around the world.

In addition to maintaining his own site, kuwlyule.com, which has his music and videos of him singing, Meath is a regular on aorbsantas.com, or the Amalgamated Order of Real Bearded Santas, an association for gentlemen who have beards and are dedicated to being Santa. Being Santa is what Meath enjoys the most.

"I got to combine singing, my interest to be with kids, and being an entertainer in one package," he said. "It's Santa with a twist."