Barge that hit bridge has little room to maneuver 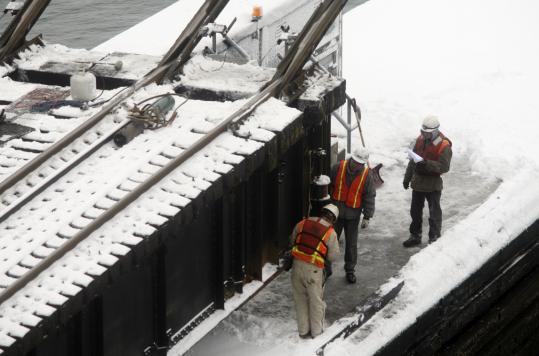 A crew worked on the damaged bridge, moved into its open position for the work. A temporary repair was completed by the evening commute. (LISA POOLE/ASSOCIATED PRESS)
Email|Print| Text size – + By Andrew Ryan Globe Staff / December 22, 2007

The barge that stuck a railroad bridge on the North Shore early yesterday and disrupted train service for thousands of commuters has had three collisions in that stretch of water this month, according to transit officials.

At 6:30 the night before the crash, the barge bumped into the bridge between Beverly and Salem but did not cause any damage, said Daniel A. Grabauskas, general manager of the Massachusetts Bay Transportation Authority. On Dec. 5, the same barge hit a nearby pier.

Yesterday's crash at 4:45 a.m. broke a signal light and damaged a mechanism that helps stabilize the bridge, which pivots open to allow water traffic to pass. A temporary repair allowed trains to start running again in time for the evening commute, but the crash sparked concern that barges using the channel are too wide.

"We were lucky that we had no significant structural damage," said Grabauskas, adding that a serious collision could halt train service for weeks for almost 10,000 daily commuters on the Newburyport-Rockport rail line.

The barge, which was hauling dredge spoils for the construction firm Jay Cashman Inc., had only 1 foot of clearance on either side as it tried to navigate the 40-foot-wide channel near the mouth of the Danvers River, according to the Coast Guard, which is investigating the crash. The bridge tender told investigators that the barge is the widest vessel he has seen pass through in his 25 years on the job, said MBTA spokesman Joe Pesaturo.

There are no Coast Guard regulations limiting the width of vessels that use the channel. "It is up to the judgment of the master of the vessel," said Lieutenant Junior Grade Christian Herold.

The Coast Guard was not aware of any other collision this month, Herold said. Federal regulations require that the operator of a vessel notify the Coast Guard any time unintentional contact is made with a bridge, even if there is no damage. The Cashman Dredging and Marine Contracting Co. declined to comment or disclose the width of its barge, saying that it is "cooperating fully with authorities to help them accurately determine the facts of the incident."

"Out of respect for that ongoing process, the company will not join in unfounded, premature speculation about the incident and its cause and will have no further comment until the review is completed," the statement said.

Although the long holiday weekend made for a lighter commute, the crash nonetheless sent thousands of train riders scrambling for cars, subways, and buses. A number of locomotives had been stored north of the bridge overnight, which meant there were not enough trains available to make the scheduled number of trips between Salem and Boston.

The temporary repair allowed the bridge to reopen at 12:55 p.m., restoring rail service in time for the evening commute. Trains had to slow to 10 miles per hour when crossing the bridge while the temporary fix was in place.

Engineers plan to shut down the bridge at 7 a.m. today and make the permanent repair. Riders will be bused between Beverly and Salem.