For cruisers, an ad-on

Like Littleton, Melrose plans to sell space on police cars for selected commercials 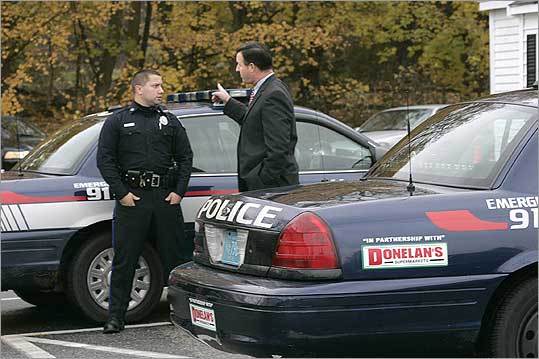 MELROSE - Doughnut companies are out. They are too much of a cliché. Liquor stores and funeral homes are also off the list. They, too, would send the wrong messages.

But other advertisers may soon be welcome to plaster their names on police cruisers in Melrose.

Continuing advertisers' march into seemingly every available public space, this small city north of Boston is preparing a plan to allow its police cars to carry up to three advertising signs, each roughly twice the size of a bumper sticker. And the ads would not end there: Fire Department command vehicles may also sport them. The advertising would respond to another stark reality these days: the tough financial straits faced by Massachusetts towns and cities.

Mayor Robert Dolan acknowledges that he is not crazy about the idea, but after six years on the job, he has heard few revenue-raising alternatives that do not involve the dreaded tax hike.

"In order for communities to survive, we need to take matters into our own hands and develop programs that provide some funding to fill the gap," Dolan said. "There is a political void of new ideas."

The ad campaign was pitched by Michael Lyle, chief of the Melrose police, and modeled on a similar program in Littleton, which two years ago became the first community in the state to accept ads on its police cars. Melrose is planning to offer a company the chance to place three ads per vehicle at a rate of $15,000 per year over three years, which is what the city now spends to lease a cruiser. Melrose has talked to a few potential sponsors and hopes to have some signed by the spring.

Along Main Street in Melrose, the idea is raising eyebrows and drawing mixed reaction. Some residents seemed resigned to the omnipresence of advertising and welcomed the possible tax savings.

"There's advertising on everything now anyway. I think it's fine," said Nicole McConaghy, 27, who recently opened Stitch, a clothing boutique on Main Street. A few doors down at Whittemore Hardware, owner Steven Trulli was looking at the bottom line.

"If it saves $15,000 a year and that could go towards education, I'm all for it," he said. "Anything to keep taxes down and provide more benefits for the taxes you do pay."

Others were against the idea.

"Advertising on a police cruiser? I think it takes away from being unbiased," said Bonnie Roberts, 53, who has lived in Melrose for 30 years and is the daughter of a former Somerville police officer. "I understand it would help with finances in Melrose, but there's got to be somewhere else to get money."

Robert Van Campen, Melrose deputy city solicitor, said the city is aware of the problem of bias and would chose commercial sponsors under the same system Melrose now uses to award contracts for other city services.

"We don't want any impression that police are going to favor a sponsor or that the city was trying to strong-arm a sponsor. That's why we decided to go the straight route, with a contract. Everything is aboveboard," Van Campen said. "This is the way Littleton did it."

John Kelly, chief of the Littleton Police Department, proposed the idea in 2005, when the town informed him that it had no money for repairs for his department's five cruisers. Kelly had read about a company in the South that was offering to place ads on police cars for a share of the profit, but his idea was to cut out the middleman.

He checked with state authorities to make sure there were no ethics rules or laws that prohibited advertising on police cars. Then he wrote a proposal and got the blessing of the town's finance committee, selectmen, and, finally, voters at Town Meeting - though not without some trepidation.

"The biggest questions were, are the cars going to look like NASCAR and will they take away from police integrity," Kelly recalled. "So we confined the advertising to the rear fenders and the back bumper."

Regardless of the size or position of the ads, George Kelling, a professor at the Rutgers School of Criminal Justice, said he believes they would erode a police department's image of neutrality and impartiality.

"Symbolically, that certain companies would have their goods advertised . . . could be interpreted as indirect support and could smack of a conflict of interest. Keeping a firewall is important," he said. "Do we want the Statue of Liberty to become the Statue of Liberty? It seems to me there are certain things in society, certain symbols we don't want to tamper with."

Kelly said he assured residents that police would not give preferential treatment to corporate sponsors.

"I don't think any of my officers would risk their livelihood, or their families, to give someone some slack on a speeding ticket because of advertising on a car," he said.

A local supermarket and car dealership signed on, and two cruisers have sported the ads. The program has generated $72,000 and is up for renewal in May.

About five years ago, Government Acquisitions Inc., a North Carolina-based company, was shopping the idea, and said it had signed up roughly 100 departments in at least 20 states. Then a group of criminal justice specialists teamed with Commercial Alert, a Washington-based nonprofit that monitors commercialism, to campaign against the idea. The coalition sent letters to chief executive officers of the 100 leading national advertisers, asking them not to buy ads on police cars. The letters said the ads would turn police cars into "rolling billboards," make police "objects of ridicule and scorn," and "may invite crime, by reducing the moral authority of the police."

Today, Commercial Alert says it is not aware of any police departments, other than Littleton, that went ahead with ads on police cruisers. The North Carolina company has since folded. Melrose officials say they hope the fears about aesthetics and ethics prove unjustified.

"If you do it in a classy way, it will catch fire and other communities will see it as a way to generate revenue without having to go to the taxpayers," said city solicitor Van Campen, who also is an alderman in Everett.

Might that be the next city to consider the idea?