Technology makes auctioneer show a thing of the past 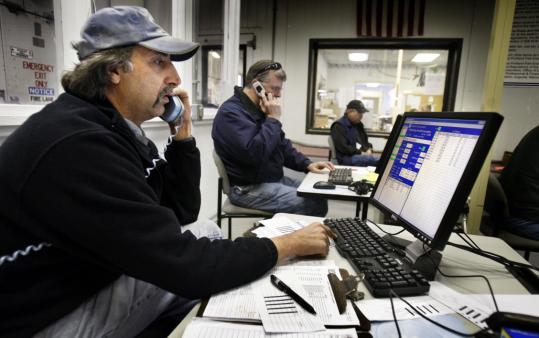 Nick Avelis (left), a fish buyer for Cape Ann and Smitty's Seafood, made a bit by computer at the auction at the Portland Fish Exchange in Portland, Maine, earlier this month. (Photos By Robert F. Bukaty/Associated Press)
By Clarke Canfield Associated Press / April 26, 2009
Text size – +

PORTLAND, Maine - You can no longer hear the rapid-fire spiel of a fast-talking auctioneer at the fish auction on the Portland waterfront.

These days, the auction at the Portland Fish Exchange is run by a computer program. Instead of raising numbered paddles in the air, seafood buyers place their bids by tapping the space bar on their computer keyboards.

After more than 20 years with an auctioneer, the Fish Exchange, where buyers bid on fresh seafood caught by New England fishermen, has entered the era.

Mike Twiss, the owner of Ad-Jon fish processing company in Portland, said he misses having an auctioneer run the show. But times change.

"I also miss my 1962 Chevrolet convertible," Twiss said. "But I wouldn't want to be driving it around today. It's a new era."

When the city-owned Portland Fish Exchange opened in 1986, it was billed as the first wholesale fresh fish display auction in the United States where seafood buyers inspect the catch straight off the boat before putting in their bids.

For the first 22 years, it operated the old-fashioned way: An auctioneer stood behind a podium at the front of a bidding room, microphone in hand, soliciting bids on seafood fresh out of the cold North Atlantic waters.

But with fish catches falling and the region's other seafood auctions in Gloucester, Mass., and New Bedford, Mass., going electronic, the time came for the fish exchange to change its ways, said Bert Jongerden, the auction's general manager.

Back in its heyday in the mid-1990s, the Portland auction handled more than 30 million pounds a year. But with many fish populations in decline and fishermen restricted by regulations, the volume this year is expected to be around 7 million pounds, Jongerden said.

With those kinds of numbers, seafood companies can't afford to have full-time buyers at the exchange anymore looking over the cod, haddock, redfish, pollock, monkfish, and more. And the auction can't afford to pay a full-time auctioneer.

At a recent noontime auction, more than 15 buyers entered bids on 20,000 pounds of fish being sold that day. But only eight or nine of them were there in person.

When Bill Gerencer, a seafood buyer for M.F. Foley Co. in Massachusetts, traveled to Europe with other seafood industry representatives in 2000, five of the seven fish auctions they visited had electronic trading.

Electronic bidding speeds up the auction and reduces costs, he said. And it's flexible because seafood buyers can be anywhere while bidding.