THIS STORY HAS BEEN FORMATTED FOR EASY PRINTING
MARSHFIELD 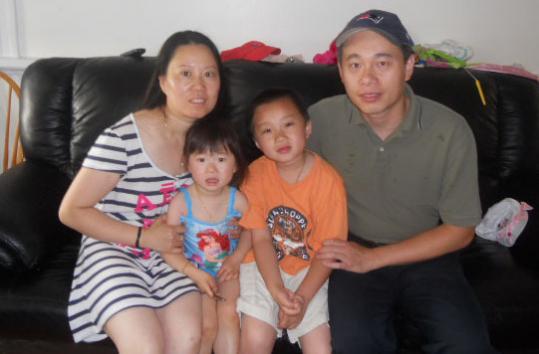 US Senator John Kerry and US Representative William Keating have joined the effort to keep a popular Marshfield restaurant owner from being deported to China, which he left almost 20 years ago to escape poverty and make a new life.

The politicians join hundreds of area residents who say 38-year-old Kong Xin Chen, who is being held by federal authorities, should be allowed to go home to his wife and two small children. Chen was arrested at his Mandarin Tokyo restaurant almost three months ago on an 18-year-old deportation order that his lawyer said Chen didn’t know existed, and is being held in the Etowah County Detention Center in Gadsden, Ala.

“It’s a tragedy that this happens because of a broken immigration system everyone knows needs to be reformed, and it’s a tragedy that everyone knows reform isn’t happening because of the broken politics of Washington,’’ Kerry said this week. “So you either tell guys like Kong Xin Chen to wait for reform you know isn’t coming, or else you try to help them one by one.’’

Kerry and Keating wrote a joint letter to the Department of Homeland Security, asking it to reopen Chen’s case.

The letter will be included with a package of about 250 other letters - from Chen’s neighbors, friends, and restaurant patrons - as part of supporting documents for a formal request for “deferred action’’ in the case, according to Chen’s attorney, Joshua Goldstein of Boston.

Goldstein said if the agency agrees, Chen could return home to Marshfield. The lawyer said he was told to expect a decision within the next two weeks and was assured that Chen would not be deported in the meantime.

“The argument we’re going to make is here is someone who has a very long-term presence in the US, has immediate relatives - his wife and children - who are US citizens and has made a really compelling contribution to his community,’’ Goldstein said. “People are incredibly concerned that someone who is so important to them could be sent [back] to a country that he has no connection to, and hasn’t been to since he was young man.’’

Chen came to the United States in 1993 as a teenager from China’s Fujian province and applied for political asylum in New York, Goldstein said.

Because of miscommunication with his attorney then, Chen missed a court appearance in 1994 and was unaware that the judge issued a deportation order, Goldstein said.

Goldstein said he didn’t know why Chen, whom he said had no criminal record and posed no threat, was arrested so many years later. Nor could he explain why Chen was sent so far from his family in Massachusetts to a prison more than 1,100 miles away.

Spokesmen for the US Immigration and Custom Enforcement were asked repeatedly about Chen’s case, but said they were unable to comment specifically.

The regulars at Chen’s restaurant, who learned about his arrest and were outraged, have rallied behind him, writing letters in support and creating a website - freekongnow.com - to spread the word.

They plan a benefit for March 24 at the Marshfield Elks Lodge to raise money for the family and for legal expenses.

Goldstein said he contacted Kerry, Keating, and US Senator Scott Brown’s offices and asked for their help.

Brown, who was not available for comment, is still reviewing the case “and we’re waiting to see what he can do,’’ Goldstein said.

“I don’t think the influence of politicians is going to be crucial,’’ Goldstein added.

“It’s really [Immigration and Custom Enforcement’s] call and we’re hoping they will go in our favor based on factors we think are important: Would his family suffer? Has he made a contribution to this country? Is he a good person?

“We’re asking them to do something out of the goodness of their heart,’’ he said.

Chen’s wife, Ping, said she’s been able to speak with him by phone and he tells her not to worry and apologizes that she has to run the restaurant without him.

She sent him a book, but it was returned, she said. The prison rules allow inmates to receive only items needed “for the sole purpose of travel or release from agency custody.’’

Myron Allenstein, an Alabama lawyer who is working with Goldstein, has visited Chen and said he is “well-spoken and polite. He’s doing OK, but he’s really concerned about his wife and children, and his parents, and that his restaurant will fold.’’

Kerry said he got involved in Chen’s situation because of his frustration with existing immigration laws and Congress’s inability to make reforms.

“I can’t tell Kong Xin Chen that there’s nothing we can do to avoid breaking up his family and destroying his business until Congress passes a bill we should’ve passed a long time ago,’’ Kerry said.

“This administration has taken steps to prioritize criminal deportation cases, and that’s the right priority, but we’ve also got to make this system work for a guy like Kong Xin Chen.’’