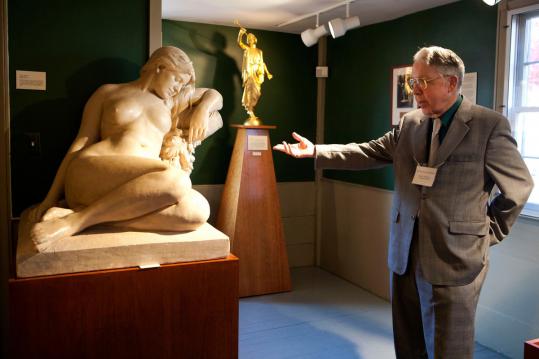 James McGough draws attention to “Lethe, or Oblivion’’ at the Cyrus E. Dallin Art Museum in Arlington, which highlights the works of sculptor Dallin (inset), best known nationally for his Native American work, including “Appeal to the Great Spirit’’ (below) at the entrance to the MFA. (Sarah Burks/Cyrus Dallin Art Museum, and Kayana Szymczak for the Boston Globe)
By Brock Parker Globe Correspondent / November 24, 2011

Cyrus Dallin’s sculptures adorn many of Boston’s most famous venues, from the equestrian “Paul Revere’’ outside the Old North Church to the Native American with his arms reaching to the sky in front of the Museum of Fine Arts, and the somber “Anne Hutchinson’’ at the State House.

Some aficionados of the Arlington sculptor, who died in 1944, lament that the influential artist is not more of a household name, and they are setting out to change that oversight.

Using the 150th anniversary of Dallin’s birth this month as a jumping-off point, trustees of the Cyrus E. Dallin Art Museum in Arlington are launching a year of events to celebrate his work and raise his profile.

“He’s the best-known artist whose name you just don’t know,’’ said Aimee Taberner, cochairwoman of the museum’s board of trustees. “His work is iconic. It is everywhere.’’

Beginning with an open house this past Sunday at the Dallin Art Museum, at 611 Massachusetts Ave. in Arlington Center, the trustees have scheduled almost a dozen events during the next year to shine a spotlight on his work.

The lineup includes an April rededication of his “Paul Revere’’ statue in Boston’s North End, a spotlight talk in May or June at the Museum of Fine Arts to discuss the sculpture “Appeal to the Great Spirit,’’ and a lecture in Arlington Town Hall in February in which MFA curator emeritus Jonathan Fairbanks, who knew Dallin, will talk about the artist.

Born in Springville, Utah, on Nov. 22, 1861, Dallin moved to Boston at 19 to study with sculptor Truman Bartlett, and settled in Arlington with his wife, Vittoria Colonna Murray, in 1900.

While his work eventually gained the respect of such famous fellow artists as Augustus Saint-Gaudens and John Singer Sargent, Dallin was a relative unknown in 1882 when he won a design competition to sculpt Revolutionary War hero Paul Revere, beating out the well-known Daniel Chester French, said Christine Sharbrough, a Dallin museum trustee.

“The Boston art culture being what it was at the time, he was a relative unknown,’’ Sharbrough said of Dallin. “People were like: ‘Who is this guy, he’s from Utah. It’s the frontier.’ ’’

Amid skepticism of the unknown artist, Sharbrough said, Dallin was asked to rework the sculpture, and he cast seven versions as a turnover of elected officials and questions about money delayed installation of the statue for decades. Sharbrough said at one point Dallin was so frustrated that he considered placing the sculpture in Arlington.

“But being the tenacious man he was, he never gave up on it because he really wanted it to happen,’’ Sharbrough said. “He really believed in it.’’

Finally, his work was cast in bronze and installed in front of Old North Church in 1940.

While it and other Dallin sculptures can be seen at prominent spots throughout Greater Boston, including his “Menotomy Hunter’’ in Arlington, his work is also found throughout the country.

His “Signal of Peace’’ is in Chicago’s Lincoln Park, “The Medicine Man’’ is in Philadelphia’s Fairmount Park, and his hammered-copper “Angel Moroni’’ stands atop the temple of the Church of Jesus Christ of Latter-Day Saints in Salt Lake City.

“He was definitely recognized as one of the most important American sculptors of his day,’’ said Sarah Burks, Taberner’s cochairwoman on the museum board.

Dallin was not a strong self-promoter, even though he was heavily involved in politics and voiced support for Native Americans, Sharbrough said. The timing of Dallin’s death may have also played a role in his relative lack of fame, according to Heather Leavell, also a trustee for the Dallin museum.

“Just as he died in 1944, representative art was going out of style, and with the advent of Modernism and abstract expressionism his style of art just was not on the radar at all, and his legacy was lost as a result of that,’’ Leavell said.

Nationwide, Dallin is best known for his Native American work, said Gerry Ward, the Katherine Lane Weems Senior Curator of American Decorative Arts and Sculpture at the Museum of Fine Arts in Boston. Growing up in Utah, Dallin had a first-hand acquaintance with Native Americans, and depicted them much more accurately than others of his era, said Ward.

The sculptor’s “Appeal to the Great Spirit’’ has been at the MFA for about 100 years, Ward said, and the museum has several other pieces by Dallin, including another sculpture of a Native American called “The Protest.’’

Leavell said she’s hoping the year of events planned by the Dallin museum will help earn the sculptor his rightful place in the history of American art and artists.

The campaign is one of the largest undertakings in the history of the small, volunteer-run museum, which has been housed in a town-owned building since 1998.

Trustees are hoping that the 150th anniversary of Dallin’s birth may also raise the museum’s visibility.

“It’s hard to get the message across, being such a small museum, but it’s a challenge and we really believe in the art,’’ Leavell said. “It’s exciting that we feel that we have this really well-kept secret.’’

A full list of the Cyrus E. Dallin Art Museum’s programs and events can be found online at www.dallin.org.

Cyrus Dallin was born on Nov. 22, 1861,
in Springville, Utah.
In 1882 he won a design competition for a monumental structure of Paul Revere.
Dallin moved to Arlington with his wife,
writer Vittoria Colonna Murray, in 1900.
In 1940, after Dallin created seven versions
of his equestrian Paul Revere sculpture,
it was finally installed in front of Old North Church in Boston.
In 1944, at the age of 83, Dallin died in his home in Arlington Heights.
Some of Dallin’s most recognized sculptures: “Paul Revere’’ in front of Old North Church
“Appeal to the Great Spirit’’ at the Museum of Fine Art’s Huntington Avenue entrance in Boston
“Menotomy Hunter’’ in Arlington’s Robbins Park
“Angel Moroni’’ on the temple of the Church
of Jesus Christ of Latter-Day Saints in
Salt Lake City
“Anne Hutchinson’’ on the grounds
of the Massachusetts State House