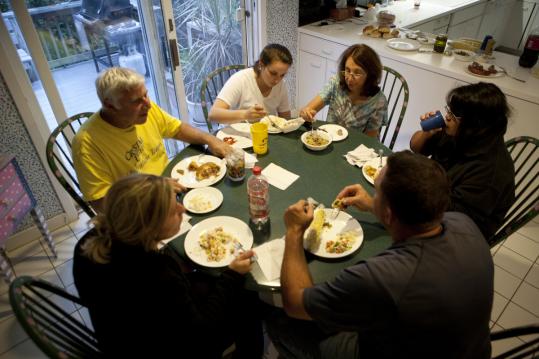 A family dinner for (from left) Merrill, Alexandra, and Sally Goldfarb of Needham can also include visiting friends. (Kayana Szymczak for The Boston Globe)
By Erica Noonan Globe Staff / September 22, 2011

Sunday is family dinner night and it is nonnegotiable. Sally and her husband, Merrill, along with their 22-year-old son, and 15-year-old twin son and daughter, sit down together, eat and talk.

For their meal on Sept. 11, the family chose an American-themed menu: hamburgers, hotdogs, and sausages on the grill, watermelon and brownies for dessert.

The Goldfarbs are part of a new Watertown-based online community, the Family Dinner Project, which aims to defeat the common barriers of time, fatigue, and grouchy parents and children to rediscover the pleasure of emotional connections over a healthy meal.

Insisting that the family sit together for dinner - without cellphones, TV and other distractions - may be the most potent tool in a parent’s arsenal, according to a group of Harvard psychologists and educators.

Families who eat together most nights have lower rates of teen substance abuse, pregnancy, depression, and learning problems, many researchers say.

The Family Dinner Project, which began last year as a collaboration between several Harvard University researchers and a pilot group of 15 families, hopes to expand its grass-roots reach and appeal in the coming months, said executive director John Sarrouf.

The project recently became affiliated with the Public Conversations Project in Watertown, an international dispute-resolution and training organization. And researchers are working to take the feedback from the pilot group and refine the website and educational outreach.

Each family established goals, which could include to have more dinners, more nutritious foods, more conversation, or more planning and participation by children, said Anne Fishel, a Newton psychologist and family therapist at Massachusetts General Hospital in Boston.

“We started asking, ‘How do you start to think about these things and make these decisions?’ We thought, why not start at home with how we learn to talk together and have those conversations as a family,’’ she said.

The program expanded in recent months to the Pingree School in Hamilton and Southern Vermont College, where administrators are encouraging students to take part in community meals. Sarrouf said he hopes to see more schools join.

“We hope to encourage people to think about being a leader in this area in their own community. It can be like a book club, where people say. ‘Let’s get together,’ and several families can have dinner together.’’

In the Goldfarb home, it was 22-year-old Jared who last year happened across the website and took immediately to the idea, said Sally, a special-education teacher at the Massachusetts Hospital School in Canton.

Sally has always loved to cook, and was pleased her son took such an interest in family life. Usually it is the parents corralling unwilling children to the table.

“Jared said, ‘We never eat together anymore. We need to make ourselves do this,’ ’’ his mother said. The family started the project on Jared’s visits home from college during his senior year. Now that he is living there, they do it weekly, she said.

Sally Goldfarb said parents may assume they need to be gourmet chefs to carry off a successful family mealtime. Not true, she said.

“It doesn’t need to be fancy or elaborate. It doesn’t even need to be dinner,’’ she said. “Make it breakfast or lunch, whatever works for your family. The point is to be together and talk to each other.’’

Monday has been designated National Family Day by the National Center on Addiction and Substance Abuse at Columbia University.

“Parental engagement fostered around the dinner table is one of the most potent tools to help parents raise healthy, drug-free children,’’ said the Columbia center’s chairman, Joseph A. Califano Jr., in a statement.

“There are so many challenges for families,’’ he said. “I was talking to a mother who said getting the whole family to the table at the same time is so daunting, something she doesn’t even try. We want kids to be invested and feel invested in the experience, so we consider how do we do that - maybe have kids cook, plan the meal, or the games at the table?

“We want to help people consider and trade tricks for keeping a 3-year-old at the table for more than two minutes at a time, and how to have meaningful conversations that can include a 4-year-old and a 14-year-old,’’ said Sarrouf, who is also a professor of peace and conflict studies at Gordon College in Wenham. “We feel the table is where people talk about important issues in life and the world, and how children start learning about being a good person in the world and engaging with it in a meaningful way.’’

The website offers tips on cutting through family tension by agreeing to put some topics on a do-not-discuss list in order to make all members comfortable, and how to encourage good table manners without making children feel over-scrutinized.

“Every family is different. Some people have better conversations in the car or before bedtime,” said London. “Find your moment; if dinner isn’t right for you than find another time. But there is something about food and having fun that seems to create the environment that makes conversation and community possible.”