A day for special adults to shine 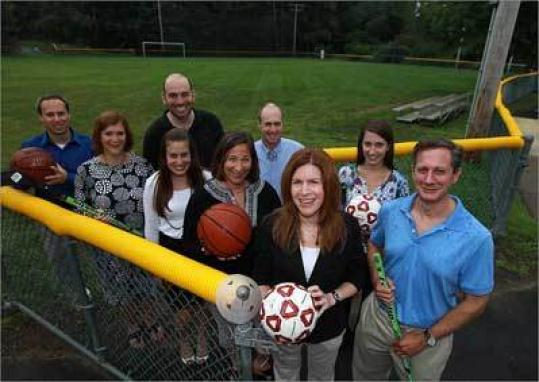 NEWTON - Marc Rosenblum of Littleton was already a longtime volunteer and member of the Yom Sport executive committee when he met Newton resident Avi Cheteoui, an athlete competing in the day of organized sports activities for adults with disabilities in August 2006.

“He seemed shy and wasn’t really interacting with anybody, so I acted like a goofball to get him out of his shell,’’ said Rosenblum, recalling how thrilled he was when Avi’s trepidation turned to enthusiasm over the course of the day.

“The next year when I saw him, it was like a woman I had gone on a bad date with. I couldn’t get the time of day out of him,’’ he said with a laugh. “I asked his mom if he was OK and she said ‘Yes, he’s happy because he has his bearings now.’ It was funny that it went from checking to see where each other was to him not needing me at all. It was cool, actually.’’

Needham resident Jan Klein, executive chairwoman of Yom Sport, said the event, which is open to all faiths, was founded 16 years ago after the agencies of the Combined Jewish Philanthropies sought ideas for more programming for adults with physical and mental disabilities that wouldn’t incur extra staff or budget expenditures. At the time, she said, opportunities were lacking.

“People generally think of kids as cute, but when they hear about an adult with a disability, they might not know what that looks like or what to expect. It’s a fear of the unknown, which makes people question whether they’re comfortable or even competent,’’ said Klein, who is also director of the Friend 2 Friend program of Jewish Big Brothers Big Sisters of Greater Boston, which pairs volunteers with adults age 18 and older who have mild to moderate disabilities.

“This person has a disability, but this is also someone with a sense of humor, interests, and a desire to contribute,’’ she added. “I don’t want to say Yom Sport is a feel-good event, because it’s so much more than that, but volunteers tell me all the time how surprised they are by their ability to make connections and how good it makes them feel. They appreciate the athletes’ enthusiasm for the events, and the athletes respond to being accepted.’’

A 13-member executive committee coordinates the annual event, which will take place on Sunday 11 a.m. to 2:30 p.m., at the Solomon Schechter Day School field, 125 Wells Ave. in Newton. Last year, Yom Sport drew a record 180 athletes and 130 volunteers - many from the Combined Jewish Philanthropies’ Young Leadership Division - who help with parking and registration, assist individual athletes, serve as team and event leaders, take photographs, hand out water, and act as cheerleaders.

The athletes will be overseen by two volunteer physicians: Gian Corrado, the head team physician at Northeastern University, and David Popoli, a sports medicine fellow at Children’s Hospital Boston.

According to Klein, each athlete receives a T-shirt, team photo, certificate of participation, and at least two medals. In fact, Cheteoui proudly keeps his collection in his bedroom on a pegboard that has become so heavy that his mother fears it will fall from the wall.

Diana “Cookie’’ Veracruz, who has participated in Yom Sport since 2005, displays hers in the living room of her apartment in Brookline.

“It’s a good event. It gets people out in the community,’’ said Veracruz, who takes public transportation to Yom Sport. While she knows some of the athletes from Friend 2 Friend activities, others become new friends, like the woman she met at last summer’s Yom Sport who attended her birthday party a few months later.

“Yom Sport is fun because we get to play sports with really nice volunteers cheering for us,’’ Veracruz said. “It shows we can do things as well as regular people.’’

Athlete Paul Fulks of West Roxbury, who has been participating since 1998, said he particularly enjoys the softball throw. And winning.

“I love everything,’’ Avi Cheteoui said. “It makes me feel happy.’’

Barbara Cheteoui, Avi’s mother, knows this better than anyone.

“Avi starts telling me in November that he’s going to Yom Sport again,’’ she said, laughing at the memory of the only time he missed the event in the last five years, when he was visiting his grandparents in Ohio in 2009. (Klein saved him a T-shirt.) He was so upset that his grandparents now travel to Massachusetts to cheer for him at Yom Sport.

As an Orthodox Jewish family, the Cheteouis appreciate that Yom Sport is held on Sunday rather than Saturday, the Jewish Sabbath, and that a kosher lunch is provided. Most of all, however, she enjoys watching her son’s confidence soar as he is showered with applause and high-fives.

“I’m so proud of him, and of all the participants. You can tell how much it means to them. They just beam,’’ she said, her voice breaking with emotion. “If you could bottle the energy from their smiles, would be broke. It’s just an unbelievable experience.’’

According to Klein, Yom Sport is funded through Combined Jewish Philanthropies, its affiliated agencies, and corporate and individual donations. Despite the generosity of the community, however, a $5 registration fee is being charged for the first time this year.

Volunteers, family members, and the athletes themselves are committed to keeping Yom Sport going for years to come.

“It’s about coming together, finding each other’s strengths, and developing friendship through shared experiences,’’ Klein said. “I don’t often take a step back and think about Yom Sport’s impact, but it’s a pretty wonderful community event.’’