Choir sings to soothe those near end of life 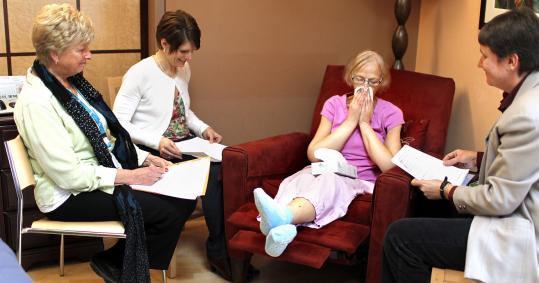 Sandra Ashe (second from right) becomes emotional as members of the Threshold Choir, (from left) Judy Whitney, Patty Ramsden, and Lisa Kynvi, sing to her at the Merrimack Valley Hospice House in Haverhill. (Cheryl Senter for The Boston Globe)
By Wendy Killeen Globe Correspondent / April 21, 2011

Sandra Ashe, a 60-year-old former first-grade teacher with advanced cancer, sat in a reclining chair in her room at Merrimack Valley Hospice House in Haverhill, three women sitting closely by her side.

“Your job is to relax and let everything in,’’ said Lisa Kynvi. “If you want us to stop, just hold up your hand and we’ll take that cue without offense.’’

It was the first time these members of a newly formed Threshold Choir sang bedside for a patient.

“It was a wonderful moment; so special,’’ said Whitney. “It’s a very intimate thing.’’

Kate Munger of California founded the original Threshold Choir in 2000, based on the ancient tradition of singing for people at the end of life. Choirs have since sprung up around the country.

“Choir’’ may be a misnomer, as members don’t perform as a large group. Rather, two to four singers at a time perform for patients. But the base group needs to be large to meet the requests, which can come at any time and in a wide geographic location.

Choir members are available to sing for patients at the Hospice House, in their homes, nursing homes, hospitals, and assisted living facilities. They also will sing for any resident of the community who requests the service, which is free.

In her job as music therapist, Kynvi sings to patients every day. What they derive from it, she said, “depends on what they are open to getting and what they need at the moment. Hopefully, it will be a connection, a sense of beauty, a sense of real focused attention on them, a sense of presence and support. We are able to offer that.’’

Kynvi said hearing is acute at the end of life, and is the last sense people lose. “It is important to remind families that even though they can’t see a response from a person, they can hear you,’’ she said.

She said the group’s repertoire is evolving. “We’ll be building in songs that are lighthearted, and some that are more serious. We’ll let the patient make the call.’’

The choir will eventually sing songs in different languages, from various religious and spiritual traditions, and some specifically written for Threshold Choir.

The music is also for family members and caregivers, who are encouraged to actively listen or sing along.

“Sometimes when you are sitting at a bedside, it is hard to know what to say or do,’’ said Dr. Suetta Tenney, a general internist and member of the choir from Andover. “With this you have something.’’

Like all hospice volunteers, choir members must be at least 18 years old and go through a background check. They do not have to be experienced singers or able to read music, but should be able to carry a tune.

The first rehearsal of the Threshold Choir, at the West Parish Church in Andover, was an eye-opener for many of the dozen or so people there.

“These songs are awesome to sing loudly, but not here,’’ Kynvi said. “There is a potential for it to be overwhelming to patients. They are fragile and very ill. We are going for a wash of sound.’’

Often, she said, the singers should replace the song’s words with ooohhs and ahhhs and humming. “That invites the patient into a non-cognitive awareness. There is a lot conveyed through the emotion of the music that can be detracted by words and their meaning.’’

Kynvi said when the singers finish, it’s important for them to sit still and “let that moment be; that’s the moment the music sinks in.’’

Because the singing style is so foreign to most people, Kynvi said learning it “is a process.’’

At rehearsal, Bonnie Mahan found it a challenge. “I am used to singing in large groups; this is a whole different situation and technique. The idea I love. But is it a fit for me? I don’t know yet. I hope so. The cause is good, so I am willing to stretch myself.’’

Jay Aris, the sole male at rehearsal, has been singing and playing guitar for hospice patients as a volunteer for a year and is excited about singing with the choir. “There is something so special about a cappella,’’ he said.

And he knows the rewards.

When he visited his first patient, Walter, at home, they had an extended handshake and looked into each other’s eyes for more than a minute. “I knew it was going to be a more powerful experience than I had anticipated,’’ Aris said. “I thought I’d just go in and be the entertainer, but clearly I was there for a whole lot more.’’