THIS STORY HAS BEEN FORMATTED FOR EASY PRINTING
Globe South Dining

For her, it’s now life by chocolate 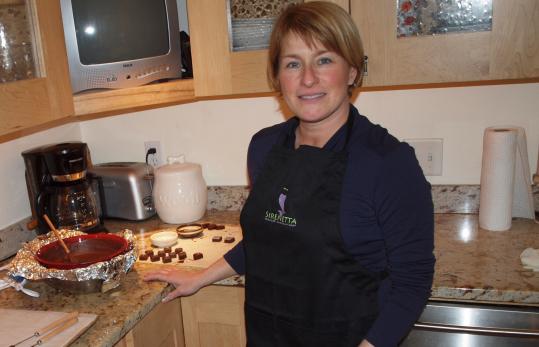 Scituate resident Danielle Verzone uses the kitchen of her 1844 farmhouse to concoct chocolates for her home-based business. (Photos By Ellen Albanese for The Boston Globe)
April 17, 2011

Chocolate restored Danielle Verzone’s faith in humanity. OK, it wasn’t the chocolate exactly, but rather the kindness and support she received from friends, neighbors, and fellow entrepreneurs when she left the corporate world to craft artisanal chocolates in the kitchen of her restored 1844 farmhouse in Scituate.

Sirenetta Seaside Chocolatier is the culmination of Verzone’s lifelong love of food and a yearning to be her own boss.

In August 2009, she was laid off from her job as a planner and buyer at the Boston office of an apparel company. She was also facing her 50th birthday.

“It was kind of a perfect storm. The stars were aligned,’’ she said, to set her on a path to a new career that would combine her favorite things.

Today, she sells her handcrafted chocolates online and at farmers’ markets on the South Shore and Cape Cod, as well as to a growing list of corporate clients. She misses the camaraderie of the office, she said, but loves the flexibility of working at home. Like many entrepreneurs, she works long hours because there’s no one to tell her it’s quitting time.

She readily admits that her line is modeled after L.A. Burdick Chocolate, a New Hampshire-based operation. “That’s the kind of chocolate I wanted to make: ganache-based interiors with subtle flavor infusions, using rich, beautiful, smooth-mouth-feel chocolate.’’

She took a course at Burdick, then followed it with an online course with Ecole Chocolat to learn the business side.

She uses primarily Madagascar 64 percent dark chocolate. As for flavors, she says, “That’s the fun part.’’

Flavor inspirations can come from anywhere. “A couple of years ago in St. John, I had a smoothie made with soursop,’’ she said. When she wanted to do a Caribbean line last winter, she found soursop puree in a local Asian market, added some rum, and experimented until she came up with a blend that worked with chocolate.

Verzone chose the name Sirenetta, which means “mermaid’’ in Italian, to reflect her seaside location and Italian heritage. “I definitely wanted a Mediterranean flair,’’ she said. “And chocolate is seductive, after all. Like a mermaid, it calls to you.’’

The Mediterranean theme carries into her flavors and collections, priced at $7.50 for a box of four pieces. The Mix di Base includes hazelnut rum, black and white sesame truffle, sweet & salty margarita, and vino rosso, while the Mix Mediterraneo includes zesty limoncello, fig and anise, mascarpone port, and basil infusion.

She said she loves to offer samples of the basil at markets because people are skeptical until they taste it.

The whimsical logo was designed by her husband, Richard Verzone, an Internet marketing professional. He also came up with the striking packaging: chocolate-brown boxes tied with lime green satin ribbon, and a tiny piece of sea glass.

New England summers present challenges. She tries not to ship in summer, but selling at outdoor markets can be difficult since chocolate should stay dry and at room temperature. She carries her chocolates in coolers lined with moisture-control packs.

Still, display is a problem. “People buy with their eyes,’’ she said, “and the product has to be visible.’’ This summer she’s going to try tucking the refrigerant packs under her display trays.

Though Sirenetta is just over a year old, Verzone reports that the business is profitable. A year ago, she participated in a couple of farmers markets, while so far this year she has been active in six markets, with plans for at least three more this summer, in North Scituate, Hingham, and Falmouth.

More important, she said, she has discovered a congenial network of entrepreneurs and has found the time to become more involved in the community.

“It’s so refreshing getting out of that corporate atmosphere to a place where people genuinely want to see you succeed,’’ she said. “It’s been a great learning experience, and the boost in quality of life is huge.’’