A new resource in Newburyport aims to woo energy entrepreneurs 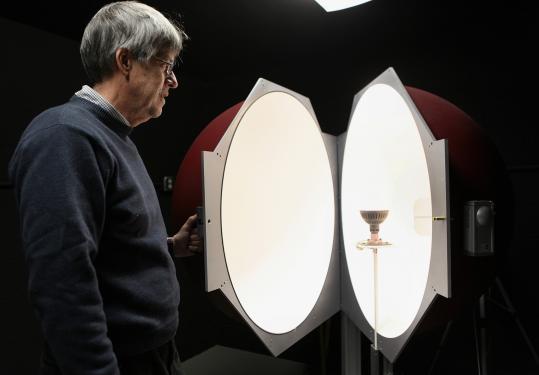 Steve Johnson was looking for a way to expand his business, and he found it in Newburyport.

“When you have a home office, you don’t really have an opportunity to expand; it’s not like you’re going to move the walls in your house to create a testing lab,’’ said Johnson, chief technology officer of Solais Lighting Inc.

He was attracted to the professional support and the private-public partnerships the Newburyport CleanTech Center is cultivating. Johnson’s year-old company, which specializes in LED technology, is headquartered in Stamford, Conn., and Johnson hopes it will grow. Solais is looking to begin manufacturing its custom lamps in the United States.

“This space gives us a real opportunity to expand as we grow, to hire more engineers as we need them, and to manufacture our customized products here, rather than in China, so that we can meet customer demand in a more timely manner,’’ said Johnson. “Over the next three to five years, we think we can grow to more than 100 employees, including the manufacturing people.’’

The Newburyport center, housed in the Lord Timothy Dexter Industrial Green, is looking to woo more entrepreneurs in the growing energy and technology sectors and help them move from prototype to product.

The center serves as an incubator for businesses in the rapidly expanding “clean tech’’ marketplace, supporting emerging companies that offer innovative and marketable solutions to environmental challenges. It was launched in late January, with help from a $50,000 Massachusetts Clean Energy Center grant.

By offering low-rent office space and access to a spacious manufacturing floor, the center’s founders hope to eliminate the barriers that prove insurmountable for many start-up companies, allowing the businesses to focus solely on their product.

“We’re looking for someone who’s just shy of a marketable idea, someone who has a prototype and needs to move beyond their garage or basement space in order to take their concept to market,’’ said Bob O’Brien, president of the center’s board of directors. “We can help them take that next step.’’

In addition to providing the basic infrastructure required to build and market a product, the center, at 10 Mulliken Way, offers entrepreneurs a broad network of support, from mentoring to funding connections. For example, a roundtable conversation held at the center last month gathered local and regional bankers, state and federal officials, and private investment firms interested in supporting new or expanding clean-tech companies.

The state’s recent loss of millions as a result of Inc.’s decision to shutter its plant at Devens and expand its operations in China has not dampened its commitment to funding new clean-tech ventures, said Kate Plourd, spokeswoman for the MassCEC. The state continues to help foster the growth of the energy industry in part by providing seed money to companies developing early-stage technologies, she said, noting that her agency accepts applications for funding on a rolling basis.

“We carefully evaluate each investment opportunity,’’ said Plourd. “We take a rigorous look at each applicant: the team, the market, the technology, and the financials.’’

The Newburyport CleanTech Center would like to launch 10 to 15 companies over the next decade, creating as many as 400 jobs in the process, O’Brien said. Mayor Donna Holaday, who pledged to bring more green businesses to the city during her 2009 campaign, has championed the center, saying it will boost the local economy by providing jobs and more tax revenue.

“What they’re doing falls right in line with Mayor Holaday’s vision and President Obama’s vision,’’ said US Representative John Tierney. Tierney, a longtime supporter of clean-tech companies, co-authored with Hilda Tolias, who is now US labor secretary, the federal Green Jobs Act of 2007, which provides training and education to help individuals secure jobs in the growing sector.

“They’re going forward to create innovative jobs that will be lasting and address our need to produce sustainable products using sustainable processes and materials,’’ added Tierney, who participated in the center’s roundtable conversation via video from his office on Capitol Hill.

The Newburyport CleanTech Center seems uniquely suited to meet Solais’s needs, said Johnson, whose four-room suite includes a dark room where he measures the performance of his company’s LED lamps in a giant sphere.

“The center has already helped me make important connections that I would not otherwise have,’’ said Johnson. “The recent roundtable, for example, gave us an opportunity to sit down with both federal and state agencies, and the private sector, and talk about how they can help. We got a lot of good information, which could lead us to avenues of funding that we hadn’t even been aware of before.’’

The Newburyport center is the newest energy incubator north of Boston. The Cleantech InnoVenture Center opened in October 2009 in the Lynn Economic Development and Industrial Corporation building downtown. The Biotech InnoVenture Center at the Cummings Center in Beverly opened in October and strives to help new life sciences companies transform their passion and ideas into long-term success.

Both the Lynn and Beverly incubators are operated by North Shore InnoVentures, a Beverly-based nonprofit formed in 2008 to support technology businesses and the economic growth of the region.

“A lot of the North Shore tech companies are smaller businesses that need mentoring, lab space, office space, and in some cases, manufacturing space,’’ said John Colucci, president of the North Shore Technology Council, a nonprofit dedicated to promoting and sustaining the region’s technology sector. “The incubators offer start-ups what they need to get their feet wet and get up and running.

“We’d like the incubators to produce a steady stream of viable companies, larger companies that will provide additional employment in the area,’’ Colucci said. “We don’t envision companies staying in the incubators for a long time.’’