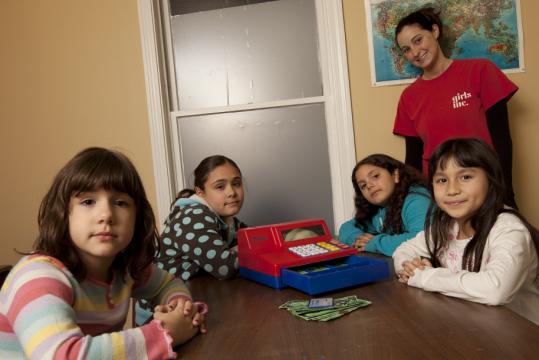 HAVERHILL — In a sprawling beige Victorian on a quiet street, an empty classroom equipped with a conference table, several burgundy chairs, and a whiteboard awaits the arrival of 10 young girls eager to learn about finances.

This is Girls Inc., a national, nonprofit organization with a local history dating to 1864, headquartered on Wall Street in New York City, with affiliates in Haverhill, Lynn, and six other New England communities. Girls Inc. serves girls from age 6 through their teens, from all socioeconomic backgrounds, teaching them financial literacy in classes designed for their ages.

Girls Inc.’s mission, says Meghan Miele, Haverhill outreach coordinator, is to inspire girls to be strong, smart, and bold. By all accounts, they are succeeding.

“Whether a girl is from a low-income or wealthy home, whether she lives in a rural or urban community, she is likely to work for pay for much of her adult life, and at some point, she is likely to be re sponsible for her own financial well-being, ’’ Miele said.

She believes that many men in our society still seem to view their daughters as individuals who will grow up, marry, and be taken care of by their husbands, so fathers tend not to instruct their daughters in the economy or finances. The same, she said, is not always true of their relationship with their sons, who begin to learn these skills early.

Girls Inc. believes that economic literacy — an understanding of basic concepts vital in making important decisions about earning, saving, spending, and sharing money — is a skill all too often lacking in girls and women of all ages.

Bonnie Hurd Smith, a public relations-marketing executive in Salem, said that as early as 1793, Judith Sargent Murray of Gloucester wrote in an essay that if she were the father of a family, she would teach her daughter early the lessons of economy, so that she might secure the necessities for herself as well as the possibility of independence.

Since then, according to a Louis Harris and Associates survey commissioned by Girls Inc., “although boys and girls understand equally well that it takes hard work and responsibility to succeed financially, fewer girls than boys feel confident about managing money.’’

This lack of early training can result in girls finding themselves in financial difficulties as they grow older, mishandling credit cards, or neglecting to save for emergencies.

Sathiel Guillermo, 20, of Haverhill, took a class with Girls Inc. when she was 6, and another at age 12. “I liked the classes,’’ she said. “Pretty cool. Hands-on.’’ She said she learned to spend and save wisely. “Girls Inc. is a wonderful place for girls to express themselves and speak their minds . . . to learn to be independent.’’

Ally Esmeal, 6, of Haverhill, participated in a session last fall. “I learned a lot,’’ she said. “In the old days, people traded stuff. But now you have to have a certain amount of money to buy things. So I wanted to learn about saving it.’’

Tatiana Rivera, 7, of Haverhill, is currently enrolled in a class called “She’s On the Money.’’ Tatiana explained that she is a second-grader and daughter of a mother working three jobs to support them, and saving for a home of their own.

“We have fun here,’’ she said enthusiastically. “This is a great place for me to learn, and we learn a lot. The very first day, we learned about money . . . how to save it and spend it the right way — for something important.’’ She said that she’s learning how to open a savings account to help put away money for the new house. Right now, she said, she’s doing more saving then spending.

Is she teaching her mother anything that she’s learned in the program?

Pat Driscoll, executive director of the Lynn branch of Girls Inc., said girls are motivated to learn about money.

“Younger girls think that money is cool, and want to figure out how to spend it,’’ Driscoll said. “Older girls receive stipends to participate, so we prepare in the spring for their summer jobs. We teach them about minimum wage, hourly pay, how do you read your paycheck, how many deductions?

“When the future becomes real, like getting pregnant and dropping out of school, they realize the lack of financial literacy is a barrier to them getting what they want and need.’’

And now more leaders in the greater community are beginning to address this issue. Smith is developing a financial workshop she plans on presenting in the spring, in partnership with Nat Pulsifer, principal of Pulsifer and Associates of Ipswich. She hopes to present the program for free at public libraries throughout the North Shore, with help of local financial institutions.