Clearing a path to the future 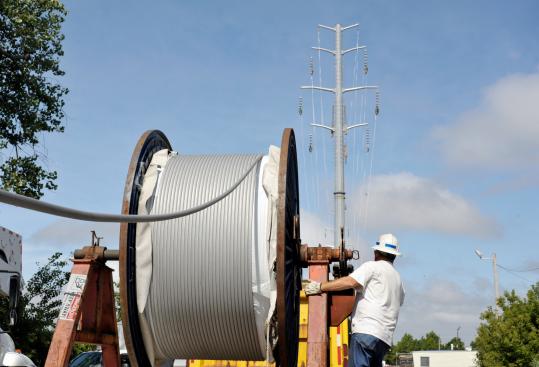 National Grid lineman Jim Thibeault strung up new power lines in July as part of a major relocation of such lines aimed at opening up access to a big chunk of Lynn’s waterfront. (Scott Lapierre/Globe Staff)
By John Laidler Globe Correspondent / September 30, 2010

Lynn is celebrating the realization of a longstanding dream as utility workers last week completed the relocation of power lines from a key waterfront site.

As icing on the cake, the city recently learned that the project would cost Lynn about $1 million less than anticipated.

For decades, city leaders attempted to clear the power lines from the 50-acre Lynnway area, known as the South Harbor site, calling their presence a major impediment to developing that land and an adjoining 50 acres.

The vision came to fruition following an eight-year effort involving the city, the state, and National Grid that culminated in the recent five-month project. The existing power lines were replaced with new ones that extend along the west side of the Lynnway and cross back over at Harding Street, ending at a National Grid substation.

“This is a face-changer,’’ said James Cowdell, executive director of the Lynn Economic Development Industrial Corp. “This is a project that can change how people look at Lynn when you come over the bridge from Revere into our city.’’

“By removing that obstacle, the power lines, we now have the opportunity to put something really special there that will allow people to access an area that has never really been accessed, to live there, to shop there,’’ he said.

Under a waterfront master plan it adopted in 2007, the city is seeking a mix of uses in the South Harbor and other sections of the 305-acre waterfront, including small retail stores, hotels, offices, residential condominiums, and publicly accessible green spaces. The plan also requires that a portion of the waterfront be devoted to marine-related businesses.

Taking the lines down was originally estimated to cost $6.5 million, to be financed with a $2.5 million state grant and up to $4 million in city borrowing. The cost estimate included about $6 million for construction and $500,000 to cover other expenses such as legal work, easements, and eminent domain takings, according to James Marsh, the city’s community development director.

But National Grid recently informed Lynn that its construction costs would end up about $1 million under budget due to material expenses — primarily steel — and subcontractor bids coming in lower than expected, according to company and city officials. Cowdell said those savings will be passed along to the city.

“We are very pleased that a project of this scope and magnitude will come in under budget,’’ said Mayor Judith Flanagan Kennedy in an e-mailed statement. “That is a credit to everyone who has worked on it, in both the public and private sectors.’’

Kennedy said no decisions have been made on how the city will use the savings.

“Once it is complete and the final numbers are in, I will meet with my development team to determine how those funds could best be put to use,’’ she said. “Considering the very challenging economic times Lynn as well as all cities are facing, I’m sure there will be no shortage of possibilities for utilizing these funds.’’

In all, the project involved the removal of 29 structures — 26 wooden poles and three steel towers — and the installation of 19 new steel poles, according to Deborah Drew, a spokeswoman for National Grid. The poles were in place by mid-August and in service Aug. 21. Last week, workers removed the last of the old structures.

In an e-mailed statement, Drew noted that at the onset of the project, all involved “recognized that moving this major transmission corridor would be an enormous undertaking.’’

“We’re in the final stretch now, thanks to the vision of the city and the partnerships that were formed along the way that assured the project’s success,’’ she said, “helping to deliver this unique, remarkable achievement, that gives to the residents of Lynn a waterfront area of which they can be proud.’’

The effort that led to the project was begun by the former mayor, Edward J. Clancy Jr., in 2002, and embraced by Kennedy after she took office in January.

The city, through the Economic Development Industrial Corp., also negotiated easements from and Garelick Farms to place power lines on their properties, and used eminent domain to secure aerial easements on several other properties.

Cowdell said only one property owner has filed a lawsuit to challenge the amount of compensation offered him for an aerial easement.

With the land now cleared, officials said the city now plans to work with the property owners — the principal ones are National Grid, Boston businessman Joseph J. O’Donnell, and local businessman Patrick McGrath — to promote development of the site.