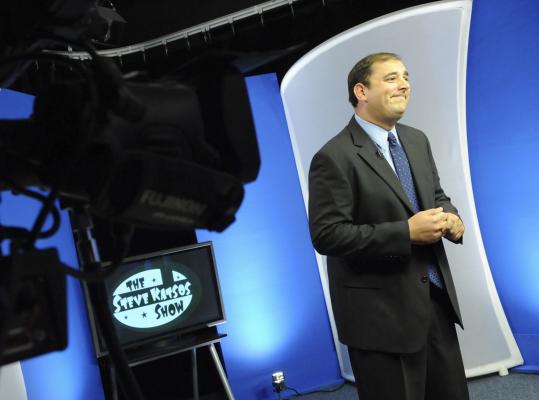 Steve Katsos awaits his cue during a recent taping in Arlington Community Media Inc.’s studio; his show is seen in a dozen states. (Lisa Poole for The Boston Globe)
By Sandra A. Miller Globe Correspondent / September 30, 2010

The swarm of volunteers numbers more than 40 when you count producers, directors, engineers, camera operators, assistants, and the five-piece house band unpacking in the corner.

Welcome to the countdown to the Tuesday night taping of “The Steve Katsos Show.’’

The production happens weekly at Arlington Community Media Inc.’s studio, but it feels more like a professional network television set than the town’s tiny cable-access operation.

Finally, Steve Katsos, the show’s 37-year-old host and the force behind the controlled chaos, steps out of his dressing room — well, the upstairs restroom, labeled with a paper sign as “Steve’s green room’’ — and some of this scene starts to make sense.

Katsos, who lives in Hudson, N.H., but grew up in Arlington, has a wildly contagious dream to make the show a commercial success — the “Tonight Show’’ of New England. In an interesting bit of marketing and distribution, the 30-minute show has aired on 80 public-access cable stations in 12 states. Katsos distributes it to some of the stations electronically, and the others get DVDs in the mail.

But since it was recently picked up by MyTV New England, a MyNetwork TV-affiliated broadcast station based in Derry, N.H., Katsos has taken a sizable, albeit cautious, step closer to his dream.

The prospect of such success is exhilarating and a bit discon certing, he admits.

“The show has a great vibe right now, and I’m not sure I’m looking forward to the sponsor thing that comes with commercial television,’’ said Katsos.

He produced a pilot for the show in 2004 as a thesis project for his master’s degree at Emerson College, but no one liked it, he said.

That changed last year, when two friends at the cable-access station in his old hometown lured Katsos, working as a freelance audio technician, to give the show that old postcollege try. One of those friends, Lakis Koulouris, the public-access production coordinator for Arlington Community Media, said he thought Katsos would provide a typical monthly program.

“I didn’t expect this intensity from Steve,’’ said Koulouris, the show’s supervising producer. “I don’t know anyone else in public access at his organizational level.’’

But it’s more than intensity and organization that keeps Katsos on the air. Think affable personality with self-deprecating humor. Think full-bodied voice with a side of Greek-American shtick. Think totally likable Jay Leno.

Now in week 75, the show follows the traditional late-night talk show format, with an opening monologue, a primary guest from the arts, a comedian, and a guest band. Through clips posted on YouTube and Facebook, the show has begun to attract creative people seeking publicity for their careers — all part of Katsos’s vision.

“I want to give starving artists a place to be seen,’’ he said.

Whether he’s interviewing a little-known talent such as Boston flamenco dancer Lauren O’Donnell or a local legend like Dick Hoyt, who runs the Boston Marathon each year pushing his son, Rick, in a wheelchair, Katsos calls on his well-honed people skills to keep the conversation flowing. With a few guests, Katsos has to fight a bit for the connection, sometimes breaking a sweat.

During a recent taping, when chatting with a guest comedian, the host relaxes a bit into his own comfort zone. By the time he is introducing a guest band, Katsos engages briefly, pitches an upcoming gig, then steps back and lets the musicians rock the house.

Between guests, as sets get shifted, Tony & the SKS House Band ramps up the energy with original music written for the show.

Initially, Katsos said, his 15-year plan was to grow the show slowly through public-access stations. By reaching out to station producers across the country, however, he has managed to land the show regularly in 1 million homes.

Originally he had decided that not until he was 50 states strong would he plot his next move, toward making the show his full-time profession instead of his time-consuming passion.

But when Christopher Murphy, the film and television development executive at MyTV New England, saw the show online and offered to add it to his lineup, Katsos eventually accepted. In June, MyTV started broadcasting the show to the 3 million homes within its reach across New England. His 75th show will be a special program airing on MyTV New England at 11:30 p.m. Sunday.

“This gives him an opportunity for wide distribution,’’ said Murphy, who has helped Katsos line up four local sponsors to air commercials during the show. “People are really going to know about him.’’

Katsos is providing upfront money for the enterprise. He pays $700 for a monthly MyTV New England slot reaching Boston area viewers, and a weekly slot on the station’s Maine affiliate, MyTV Portland. That’s in addition to the $14,000 he spent for professional sets, quality sound equipment, and his one-year live anniversary special that raised $4,000 for the Dana-Farber Cancer Institute’s Jimmy Fund.

Any money from sponsors on the commercial stations will probably cover just the cost of airtime, he said. Katsos is not allowed to run commercials on the public-access channels, and doesn’t expect to see profits or a paycheck from the talk show for a while.

But he sees all of this as an investment in the dream.

“If this show is actually going to be, let’s say, the next ‘Tonight Show’ from Boston, then it must turn into a commercialized product,’’ he said.

While Katsos would love for the show to be profitable, his hesitancy has much to do with the challenge of paying his now-volunteer team, including five writers and that wave of cheerful people — ranging from high school students to television professionals — flooding the studio every Tuesday night.

Right now the excitement of working on the show seems to be enough for them.

“It’s the kind of thing that gets you hooked,’’ said associate director Steve Ranieri, 52, of Arlington. “Steve knows how to light a fire under people so they want to do a good job.’’

Lucas Gradwohl, a 16-year-old Arlington High School student who serves as the multimedia segment producer, observed, “The crew is like a family.’’

Some of the crew really is family, including a cousin, Hope Orfanos, the coordinating producer, and Katsos’s 85-year-old father, Elias, the senior producer. An Arlington resident, Elias is the reason Katsos has access to the public studio. The elder Katsos also takes his place in the front row of the 12-member audience each week, offering comedians someone to play off. And the host’s wife, Shara, also aims to be at every taping.

When problems arise, such as technical failures, the crew muddles through, then Katsos edits scrupulously before the show is aired about three weeks later.

“With a volunteer crew, you’re going to get up and down moments,’’ said Katsos. But he anticipates that will change with commercial sponsors, based on their higher expectations — another reason to proceed with caution.

“This project takes a lot of my time, and it could end next week if something happened,’’ said Katsos. “And what does that mean? It means that at least for 75 weeks I’ve helped creative people by putting their stuff in millions of homes.’’

Sandra A. Miller can be reached at sandraamiller@aol.com.